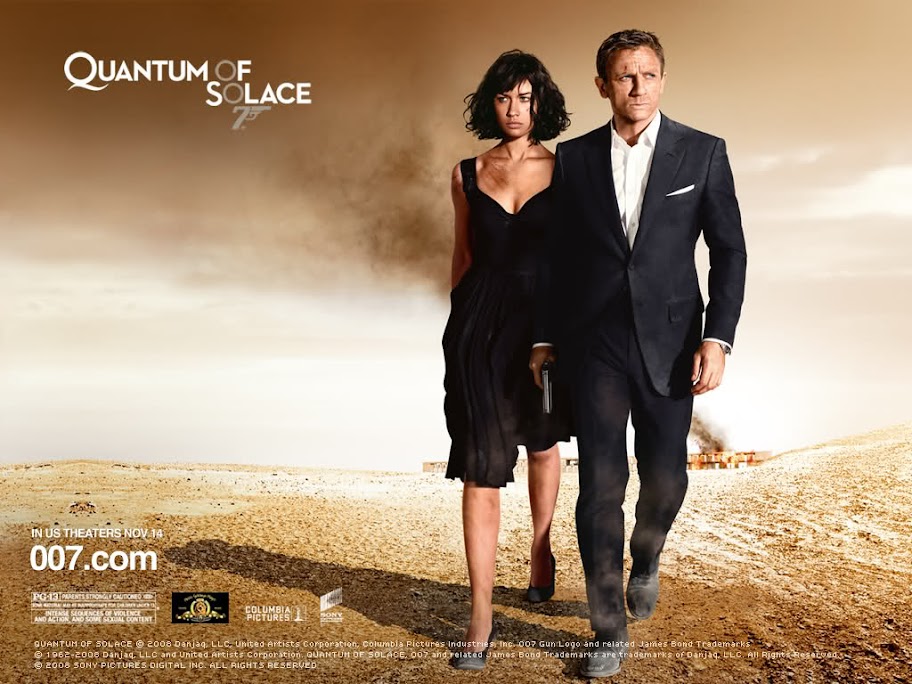 Daniel Craig’s second outing as Bond in a breathlessly brutal and kinetic dose of spy hokum.

It seems every Bond has to ‘go rogue’ at some point, and this is Craig’s mission of vengeance to kill the men who killed his Vesper in the previous film. Some men get very attached to their motor scooters. Cue stoney-face, steely-gaze and ice-cold blue eyes as Craig runs, jumps, batters and shoots his way around the world in an attempt to out-Bourne the Bourne franchise.

It has a certain flair and Bond was never more stylish in a suit and DJ, but you have to ask whether the old boy has had his day.

Craig is suitably bloodied and bruised through his various fights and set-pieces, most of which you feel you’ve seen already in Bourne. There are action highlights such as the aerial sequence in the DC3 Dakota (as long as you park your brain at the airfield), jumping without a parachute and a speedboat chase; all of which scream in defiance of the laws of physics and gravity in particular.

Bouncing around London, Haiti, Italy, Austria and South America, Bond no longer seems to have it’s own distinctive identity. Craig tries the occasional arch quip, but this is a mistaken throwback to the camp heyday of Roger Moore. The glamour locations of casinos, cocktail parties and the opera look good on screen but occupy the fantasy world of espionage the producers insist we’ve left behind. After Bourne’s grubby chases through slums and underpasses, surveilled by bespectacled graduates in shabby offices, Bond loses touch with reality in an MI6 headquarters that looks like an Ikea showroom, with lots of Minority Report-style swooshy, point-and-swipe computer screens. We all know the British government doesn’t have that kind of money.

Bond flushing out the bad guys at a modern production of Tosca is a nice touch. That said, the bad guys turn out to be a bunch of oligarchs and corporate monopolists is a tad lame. Never mind Smersh, Spectre, China, North Korea, the FSB, or Al Kaida, it’s those company men in suits you have to watch out for. It’s not about gold bullion, nuclear weapons or satellite lasers, it’s about water. It may be the next global conflict, but it just doesn’t feel right for 007. That said, Matthieu Almaric is a loathsome and repellent (if underpowered) ‘suit’ who spins a nice line in reptilian glances and villainous quips. Although his laughable fight with Bond goes on far too long. In fact, for all the brutality of the punch-ups and gun-play, nobody manages to kill anyone quickly.

Bond’s women don’t fare any better in this new-era re-boot either. Dame Judy Dench is out of place as the oldest head of MI6 and puts up with Bond’s nonsense when she should let the CIA just shoot him. Fields (Gemma Arterton) gets little to do except be seduced into bed by Bond (some things never change) and artistically replay Shirely Eaton in negative – Goldfinger fans will appreciate the gag. Unless I missed it, he doesn’t actually get to bed his side-kick Camille (Russian Olga Kurylenko succesffully playing South American), with her own vendetta against exiled general Medrano (Joaquin Cosio).

The finale is in Bolivia. Bolivia? Really? Instead of the arch-villain’s lair, we have a modernist hotel in the middle of the desert. And they have to blow up the entire hotel for a climax. Of course.

I keep coming back to unfavourable comparisons. You long for the sympathetic edge that Matt Damon brings to the hunted and haunted Jason Bourne. Instead we get Craig’s Bond, a smouldering thug, a brute in a suit with no subtlety; Batman without the cape and cowl or any concern for higher justice. Marc Forster directs a kinetic frenzy with aplomb, but no heart. Skiffle – sorry, Skyfall – has to do better than this. RC

Robin Catling gained degrees in both arts and technology which led to a diverse portfolio of employment. A freelance systems analyst, project manager and business change manager for the likes of American Express, British Airways and IBM, he moved on to web design, journalism and technical authoring. He has also worked in film and television, both behind and in front of the camera, including productions by Steven Spielberg, Martin Scorcese, Ron Howard and Ridley Scott. A qualified three-weapon coach, he runs West Devon Swords teaching sports fencing to all age groups, and in recent years qualified with the British Federation of Historical Swordplay to teach medieval and renaissance combat in the Historical Western Martial Arts.
View all posts by Robin Catling »
« Full Circle Magazine Issue 62 Out Now
News »