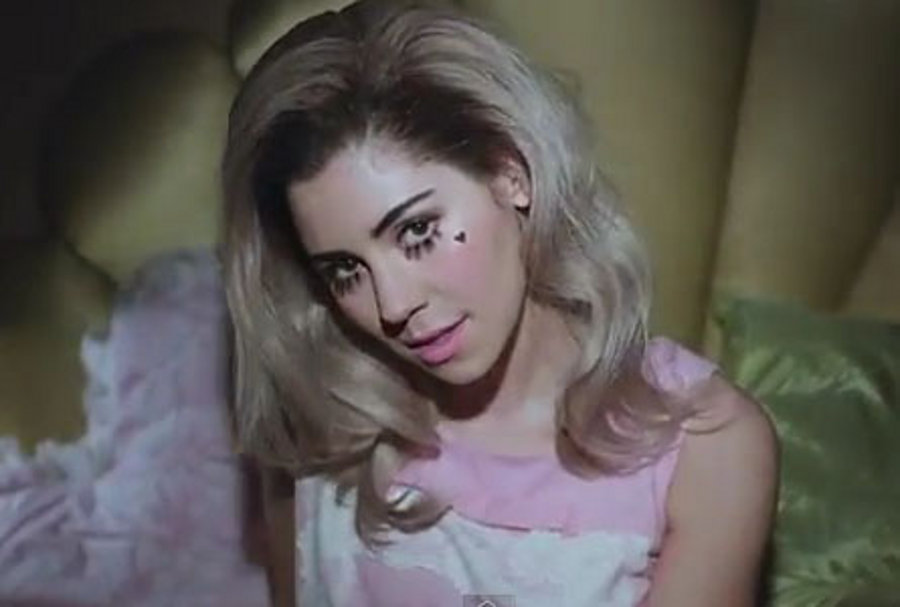 The thing with Marina is she spends most of her time sounding like someone else. Frequently somewhere between Kate Bush, Pat Benatar and Blondie, it was suggested to me that the single Power and Control is pure Bat for Lashes, which will annoy Marina’s contemporary Natasha Khan.

Throw in a bit of Diana Vickers up-and-down vocals, the chunky synthesisers of Little Boots and some most-modern, post-consumerist, post-feminist lyrics and you get an album of cynically knowing story-songs wrapped in glittery bubblegum-pop production.

Electra Heart‘s title, with its’ classical allusion, labels this too-clever-by-half second album with it’s art-school pretensions. If you like Marina already, you’ll like the intelligent songs with playground lyrics and a decidedly jaded world view.

You also get a lot of album for your money; sixteen tracks, mostly shy of four minutes. If you don’t like one, another will be along soon.

The short, punchy intro number Bubblegum Bitch, apart from the shock value of that b-word has no real lyrical value other than to highlight the undercurrent of hate for the modern woman. First single release Prima Donna Girl is a witty extension of the Material Girl thread. The explosively titled Homewrecker (“I break a million hearts just for fun”) really does a hatchet job on a certain type of woman, “looking pretty in this dress, just an image of deception.”

In case you get complacent, power ballad Starring Role throws around a few F-words just to highlight the disappointment and betrayal theme – Marina does Alanis Morrisette – ” send my best regards from hell.” Even amidst the angst, “I’d rather walk alone than play a supporting role,” Starring Role is one of the more rounded tracks.

The State of Dreaming starts slow and kicks into a faster pop number. You can’t say it’s particularly original lyrically – “My life is a play” and “I live my life in a dream, only waking when I sleep” – but this is the most Kate Bush-like track, an inevitable comparison you just can’t avoid. Placed over a snappy ELO backing track, it is however quite effective.

Power and Control, the current single is the big production number with all the poppy Marina trademarks. It’s also the most blatant Bat for Lashes imitation. Luckily it is also the ‘Marina the modern-woman fights back’ track which is a relief coming half way through the album.

Living Dead unfortunately goes back to jaded synth-pop; “Got bubble-wrap around my heart waiting for my life to start.” As for Teen Idle, it’s witty in the post-Lilly Allen style of wit. Scathing of teen culture, of course it turns dark; “Burning up a Bible, feeling super super super suicidal.” It’s not exactly Lennon and McCartney, but at least it has something to say.

I dreaded to think what Valley of the Dolls would bring; a Vangelis backing track and a reflection on female identity. “Built with a heart broken from the start, I die easily.” That’s pretty much how it trundles on. Can you see the patterns emerging?

Hypocrates: “So hypocritical, overly cynical, who are you to tell me?” It’s a gentle, mainstream, Smooth Radio act of resistance. With a long guitar break.

Fear and Loathing: “I’ve lived a lot of different lives, been different people many times… I fill my heart with emptiness.” Oxymoronic, Marina. However she means well – “not everyone is out to screw you over…. you don’t have to live your life in fear.” Wow. A positive message inside a song that sounds like a suicide note. All this and self-diagnosis – “Got different people inside my head.” Evidently it’s a pop-star thing.

Another single, Radioactive, does the night-club trance thing. It’s a sort of Marina’s Greatest Hits, another feminist fightback song over some cool beats, something for the DJ’s and remixers to play with and get the kids on the dancefloor. “My heart is nuclear.” Reach for the Gaviscon.

Sex Yeah. “Been there, done that, got the t-shirt.” Not the most original lyric, but that’s that out of the way.

Lonely Hearts Club: “Do you want to be with somebody like me?” Ah, modern dating, both needy and desperate, cynical and aloof. It’s all a bit percussive and disonant. Which is fine if that’s your world view, I suppose.

Buy the Stars: “You’ll never see that the stars are free.” It’s a curious sign-off, that wraps up all the things that are right and wrong with the album. Somewhere between a coldly calculating production exercise and a public service, pulling back the curtain in Oz.

It’s an accomplished album, no question, but I don’t quite understand who Marina’s audience is, which is perhaps why she hasn’t made bigger inroads to the pop charts and why the Americans regard her as a novelty act. SC

Sue Corsten is a film and TV make-up artist based in the UK.
View all posts by Sue Corsten »
« Humour: Ever Feel Like You’re in the Wrong Place?
Movie Catch-Up: The Road »

3 thoughts on “Review: Marina and the Diamonds – Electra Heart”