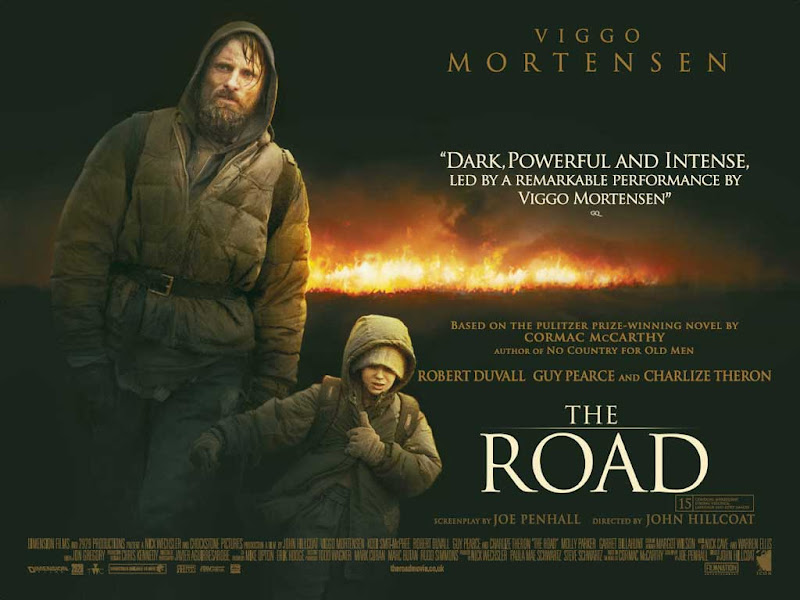 In a post-Apocalypse America, a father and son (Viggo Mortenssen, Kodi Smit-McPhee) scavenge to survive in this adaptation of Cormac McCarthy’s (No Country for Old Men) Pulitzer Prize-winning novel The Road.

In a nuclear-winter wasteland overrun by red-neck cannibals, this is not so much Mad Max as Dreary Filthy Max as re-imagined by Ingmar Bergman. This is a grim, down-beat schlepp through the decaying detritus of civilisation, in which most of the thrills from McCarthy’s ‘thrilling’ novel have been removed.

This may well be how it is when the thin veneer of civilisation is stripped away and what’s left of humanity loses all decency and dignity in the struggle simply to survive. However much Mortenssen tries to remain a man of moral courage and ‘carry the fire,’ his fire is dying.

The unspecified apocalypse remains a mystery even in the flashbacks with wife and mother Charlize Theron, a decent cameo matching those by Robert Duvall and barely recognisable Guy Pearce. The resulting death of all plant and animal life makes for a truly grim world, an all-pervasive sense of doom.

At nearly two hours, The Road feels longer, as director John Hillcoat (The Proposition) takes Joe Penhall’s edgy but slow screenplay and slows it down further, giving the parent-child relationship time to breathe (or cough, in Mortenssen’s case), whilst giving us a truly scary vision of the end of the world, all mud and ashes and leaden skies.

If not for Mortenssen, Smit-McPhee and Theron, this would be a dull, unappealing journey, even with a spark of hope in the midst of tragedy at the end. There is no happy end to the misery, despite the boy’s spirit and moral fire; prospects at the end-credits remain bleak.

I remain divided over The Road. It may be a masterpiece, but having lived through their apocalypse, you feel so downcast by the finale, you just want the world finally to end. It may be fine drama and escapism, but it’s not into a world you enjoy. Tom Hardy’s Mad Max re-boot opens soon and  I’ve a feeling The Road will remain one for the art-house philosophers.

Robin Catling gained degrees in both arts and technology which led to a diverse portfolio of employment. A freelance systems analyst, project manager and business change manager for the likes of American Express, British Airways and IBM, he moved on to web design, journalism and technical authoring. He has also worked in film and television, both behind and in front of the camera, including productions by Steven Spielberg, Martin Scorcese, Ron Howard and Ridley Scott. A qualified three-weapon coach, he runs West Devon Swords teaching sports fencing to all age groups, and in recent years qualified with the British Federation of Historical Swordplay to teach medieval and renaissance combat in the Historical Western Martial Arts.
View all posts by Robin Catling »
« Review: Marina and the Diamonds – Electra Heart
Book Review: Williams’ Progress by Matt Rudd »

7 thoughts on “Movie Catch-Up: The Road”