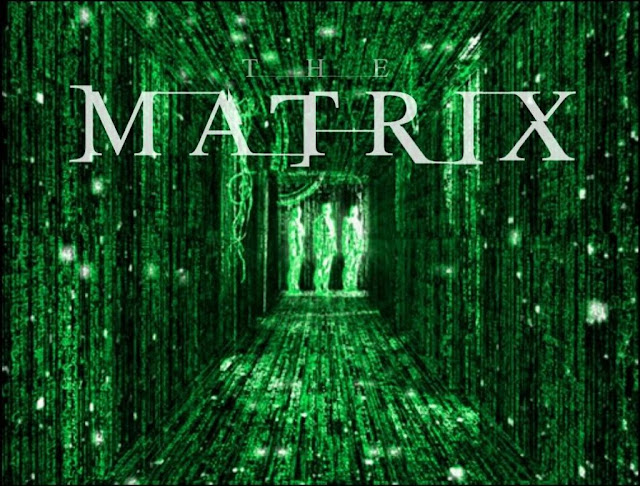 [Sigh] I think the trouble is, I like the idea of The Matrix more than I like the movie.

The visual pizazz and kinetic frenzy of it still stand up well. An effects and martial-arts laden behemoth, it gave us bullet-time photography and a new generation of CGI’d movies. Like many a high-concept movie, The Matrix begins well, an action-conspiracy thriller, but like many of them, it soon collapses under the weight of its’ own messianic pomposity.

Written and directed by the Wachowski brothers, the problems with The Matrix begin with them. It takes a lot of arrogance to make this kind of millennial-angst, pop-corn sci-fi and the trouble is they deliver an absolute turkey of a script to actors they simply don’t know how to direct.

To many, this will be sacrilege, although the religiosity of The Matrix is a whole subject of itself. Can you work out who’s Jesus, John the Baptist, Judas and the other Apostles?

All plaudits go to the bad guys, Hugo Weaving at his most sinister and Joe Pantiliano at his most repulsive, because without them all you get is Laurence Fishbourne’s thuddingly dull, ponderously clunking delivery and leading man Canoe Reeves at his most wooden. Frankly, faced with these two, I’d want to shut down the revolution and go hide in the power plant for the rest of eternity as well.

Start stripping away plot, dialog and acting and you find that aside from the visuals it’s painfully unoriginal. For all the virtual reality nonsense, the constant references to other books and movies give away how unoriginal it is. Alice in Wonderland meets Dune and King Arthur with a dash of Star Wars thrown in. Well, everything’s been done already, why not?

It begins to decompose as soon as Morpheus (Fishbourne) reels off his bit of Basil Exposition explaining what the Matrix is – cue first clunking mistake. The Matrix is the sop to keep the human crop quiet while they’re harvested in the Power Plant, “…combined with a form of fusion.” Hello, if you’ve got fusion what the hell do you need five billion sheep for?!?!? What really kills it is the messianic Prophecy, that says Neo (Reeves) is the One. He’s a right one, no question. But saviour of humanity? Just as laughable as Kyle McLachlan’s Paul Atreides in Dune (another turkey for another time).

Despite the delightful turn by the late Gloria Foster as the Oracle, and some playfulness with the idea of fate and predestination, the very mention of The Prophecy derails the whole thing.

By the way, the Wachowski’s cod-philosophy is priceless. “It is not the spoon that bends, rather it is yourself.” Which is funny, as a few seconds earlier, we’re told “there is no spoon.” Ah, dialog. Who needs it when you’ve got Carrie-Ann Moss in a selection of skin tight rubber outfits? Have we mentioned the rubber and leather fetish? Or the slightly kinky green suit and sunglasses look of the Agents?

Or, more worryingly, the unhealthy gun fetish, combined with a body count to make Rambo blush. The Matrix made fashionable the slow-motion bullet ballet that we’ve suffered from ever since.

You can enjoy the various chase sequences and the now-iconic rendering of the matrix in computer code, while the mixed martial arts hark back to Bruce Lee classics – although personally I could do without the constant whooshing sound effect with every blow. The orchestral score cranks everything up to eleven on the Overblown-Wagnerian scale, sacrificing most of the pop-rock songs on the alternative soundtrack.

I look at The Matrix now and I understand not only why some folk don’t ‘get’ science fiction or fantasy, but why some don’t get the movies at all. Don’t even mention the two sequels. RC

Robin Catling gained degrees in both arts and technology which led to a diverse portfolio of employment. A freelance systems analyst, project manager and business change manager for the likes of American Express, British Airways and IBM, he moved on to web design, journalism and technical authoring. He has also worked in film and television, both behind and in front of the camera, including productions by Steven Spielberg, Martin Scorcese, Ron Howard and Ridley Scott. A qualified three-weapon coach, he runs West Devon Swords teaching sports fencing to all age groups, and in recent years qualified with the British Federation of Historical Swordplay to teach medieval and renaissance combat in the Historical Western Martial Arts.
View all posts by Robin Catling »
« Book Review: Williams’ Progress by Matt Rudd
Opinion: Microsoft Surface Tablet »