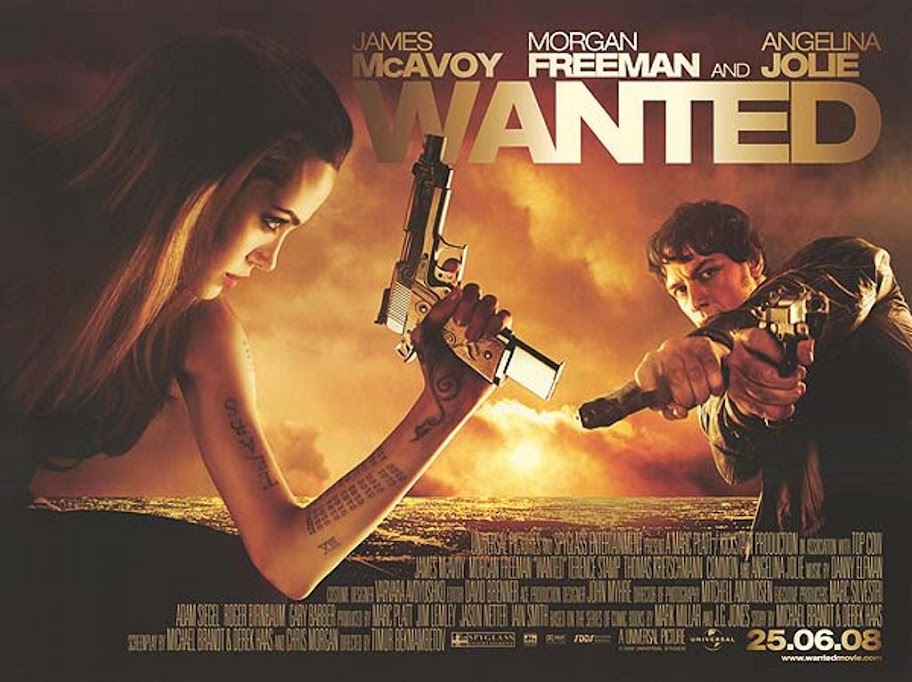 Unwanted, adolescent, derivative, vacuous, over-the-top, stunts and effects-driven tosh from Timur Bekmambetov (Night Watch, Day Watch), mistakenly given a big budget to feed his slow-motion gun fetish for this ridiculously violent guff about a cult of super-assassins. I suspect it’s all about the video game.

Morgan Freeman at least tries to keep a straight face spouting rubbish about the Loom of Fate. What next? The Vacuum Cleaner of Destiny? More like the Toaster of Disappointment.

Wanted desperately tries to be the next Matrix crossed with James Bond. Terrence Stamp and Angelina Jolie turn up to collect the cheque, while hilariously mis-cast James McAvoy looks suitably embarrassed through the whole thing. Not wanted at all. But in case you still want to…

Wesley Gibson spends ten minutes as corporate drudge and is then whisked off via ten minute chase sequence to be brutally trained up as the uber-assassin to catch his father’s killer; for Wesley is The One. Oh dear, we’ve been here before.

In a mere six weeks he can shoot around corners, run, jump, knife, kick and punch anything that moves. So he does. Endlessly. Train de-railment off a bridge into a ravine notwithstanding. Until dramatic-turning-point-three at about one hour fifteen. Then we get the Matrix style break-in to the top-secret assassins’ hide-out (a linen factory).

From the opening Matrix-lite sequence of flying assassins and round-corner bullets, Wanted is an R-rated splatter-fest so shamelessly derivative it ought to sub-title the shot-list with the original credits.

It’s based on 300 creator Mark Millar’s 2003 mini-series for Top Cow comics; which explains a lot, none of it favourable. The Fraternity, a pre-crime cult of assassination based on names from the Loom of Fate (nope, still sounds stupid) woven into cloth, somehow manage to miss Hilter, Stalin, Pol Pot, Jeffrey Dahmer…

The cast includes another Brit, Marc Warren as a hard man (???) and Bekmambetov’s stalwarts from Night Watch and Day Watch.

Now those are two silly, excessive, but ambitious and witty movies; here Bekmambetov completely goes off the rails with all the toys he has to play with – guns, cars, CGI, Angelina. There are occasional inspired flashes, but little to top McAvoy’s ATM: “Insufficient funds.You’re an asshole.”

Angelina as ‘Fox’ (groan) is mostly absent, quietly rehashing a bit of Lara Croft. Freeman (Sloan) does a bit of class acting on auto-pilot, as does Stamp. McAvoy is much more entertaining as the loser Wesley, with whom we could have had a decent re-run at Gilliam’s Brazil. McAvoy eventually stops whining long enough to channel Toby McGuire’s Peter Parker but by then, I’d stopped caring. Actually I never started.

As a cynical insert into the action genre, the studio must have known the real audience for this guff isn’t old enough to get into the theatre to see it. RC

Robin Catling gained degrees in both arts and technology which led to a diverse portfolio of employment. A freelance systems analyst, project manager and business change manager for the likes of American Express, British Airways and IBM, he moved on to web design, journalism and technical authoring. He has also worked in film and television, both behind and in front of the camera, including productions by Steven Spielberg, Martin Scorcese, Ron Howard and Ridley Scott. A qualified three-weapon coach, he runs West Devon Swords teaching sports fencing to all age groups, and in recent years qualified with the British Federation of Historical Swordplay to teach medieval and renaissance combat in the Historical Western Martial Arts.
View all posts by Robin Catling »
« Opinion: Microsoft Surface Tablet
How-to: Sweep Your Hotmail Inbox »