Review: The Girl With the Dragon Tattoo 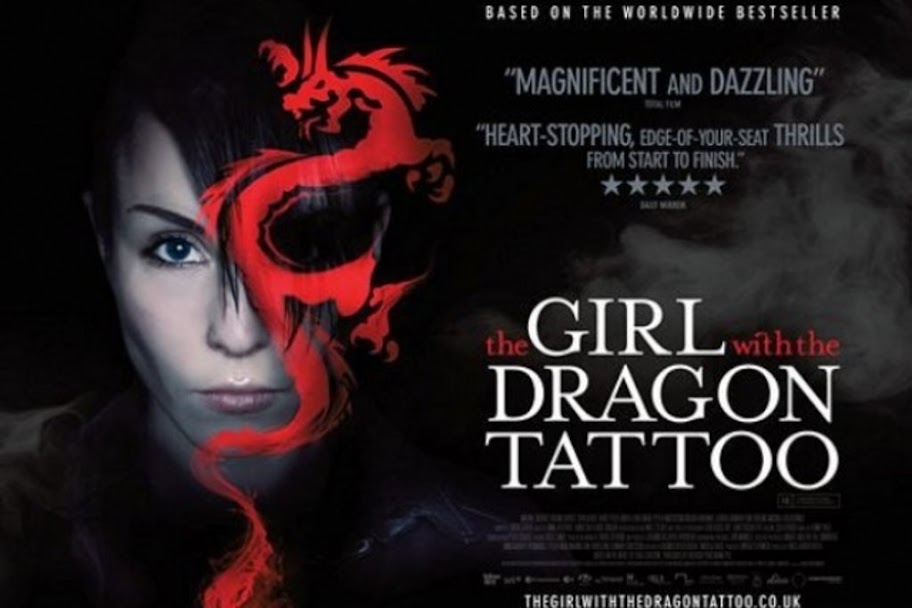 This is a movie that divides opinion: smart thriller featuring a feminist action-heroine, or an exploitation flick that savours violence against women?

Campaigning journalist Blomkvist loses a libel case against a wealthy businessman, and is offered a working exile by an equally wealthy industrialist. Determined to solve the forty year old disappearance of his niece, Vanger suspects his bickering family of her murder. Salander cannot resist breaking cover to help in the investigation…

The Girl With the Dragon Tattoo is a serious, shadowy, almost monochrome movie adaptation of a dark, heavyweight thriller. Although less than three years old, the content and style are staples of TV cop shows of the last decade; murky family murders, serial murders and the unmasking of a serial killer. It looks and feels much like the darker TV cop dramas that grace our small screens; everything from Sky’s Sleepyhead to Lynda La Plante’s Above Suspicion, Denmark’s The Killing and of course, both Swedish and English versions of Wallander.

If not for sales by the truckload of Larsson’s book trilogy, TV is undoubtedly where this would have ended up; there’s enough material to fill a decent mini-series and nothing particularly cinematic about it – not even the landscapes.

It is well executed, well cast – even if Nykvist gets short-changed with his agent-provocateur role – if a little slow in places, but then Swedish cinema always does things at a different pace. What sets this apart is the central performance by Rapace as the introverted, post-punk, Mad Max heroine Salander; leather-clad, spike-haired, piercings and that immense tatoo down her back – which we get to see a lot of in the course of some graphic sex scenes to go with the graphic violence.

It is hard to say which is more shocking, the physical and sexual assaults Salander suffers or her equally violent vigilante fightback. The movie spends a lot of time on the graphic indignities inflicted on our angry survivor. Forget Lara Croft and Nikita, this is one tough bird, closed down and resisting sympathy – Blomkvist’s or ours. It makes her rather difficult to like, much less cheer on.

Things gets silly with Salander’s elite computer hacking skills which mostly deliver plodding Blomkvist the solution on a plate. If you don’t spot who dunnit from the performances, even under sub-titles, then you’re not paying attention.

So what we get by the end is a trail of murdered women, strung together Tab-A into Slot-B in a formula familiar from 7even of TV’s Messiah with a few closet Nazis and obligatory insane Biblical references.

I’ve just missed the English language remake with Rooney Mara, Daniel Craig; I’ll expect more of Craig and less of Mara; you know the remake will be faster and sanitised for the Americans. Whether it will be more cinematic or better remains to be seen. I’ll take a Swedish original any time. RC

Robin Catling gained degrees in both arts and technology which led to a diverse portfolio of employment. A freelance systems analyst, project manager and business change manager for the likes of American Express, British Airways and IBM, he moved on to web design, journalism and technical authoring. He has also worked in film and television, both behind and in front of the camera, including productions by Steven Spielberg, Martin Scorcese, Ron Howard and Ridley Scott. A qualified three-weapon coach, he runs West Devon Swords teaching sports fencing to all age groups, and in recent years qualified with the British Federation of Historical Swordplay to teach medieval and renaissance combat in the Historical Western Martial Arts.
View all posts by Robin Catling »
« How-to: Keep Spam out of your Hotmail
Review: Amy MacDonald – Life in a Beautiful Light »

10 thoughts on “Review: The Girl With the Dragon Tattoo”