Review: The Girl Who Played With Fire 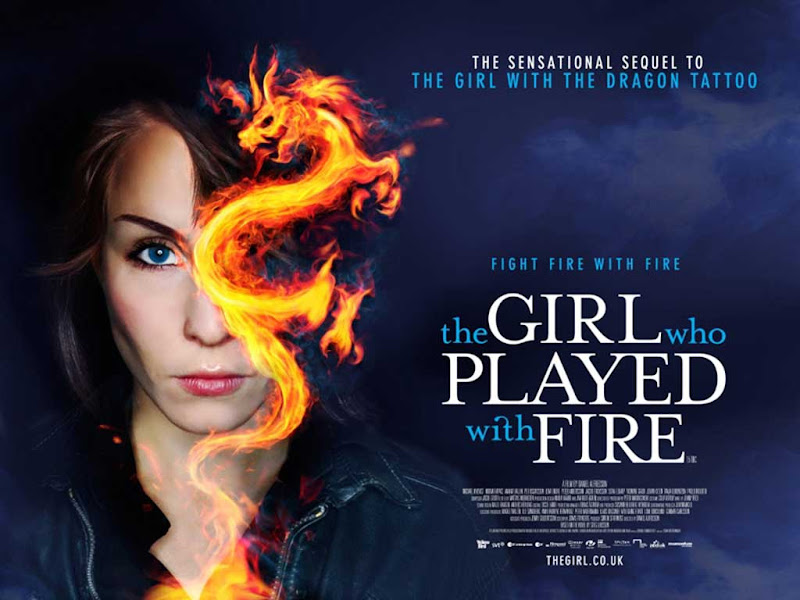 The Millenium Trilogy slams into the ‘awkward middle episode’ as a jumble of TV detective fiction with some sex, violence and post-Cold War espionage thrown in to liven things up.

After the excellent, if un-cinematic, The Girl with the Dragon Tattoo, it looked like the adaptation of Stieg Larsson’s Millenium novels would be the next hot film franchise. Made swiftly to capitalise on the International success of the first instalment, The Girl Who Played With Fire has all the elements but not quite the, well, fire…

Disjointed and with a disappointingly loopy plot, Noomi Rapace gets credit for saving this also-ran Sunday evening TV mystery.

Rapace is back as Lisbet Salander, Larsson’s damaged, goth cyber-hacker heroine, still the cold revenger against those who’ve wronged her. Only this time, we get Salander as spy-girl, traipsing about in a succession of bad disguises. Michael Nyqvist gets to do some investigating as rehabilitated reporter Blomqvist, with trade-mark leather jacket and hair colour only slightly less preposterous than the Ikea loft apartment which passes for his Millenium magazine office.

And this is where the dual plot strand fail to connect either the characters or to a conclusion: tangle of sex-trafficking, official corruption, a Russian mafiso who happens to be a Soviet defector, a triple murder and – oh, Salander’s the chief suspect! No contrivance is too much as Lisbet has a family connection at the head of all strands.

What we liked about Girl with the Dragon Tattoo was the combination of edginess and grit, discomfort and emotional wreckage. For The Girl Who Played With Fire, they’ve thrown out most of that in favour of a standard Hollywood thriller format with added sleaze and violence. I know it’s a Swedish film, but do we need the lesbian sex scene near the beginning?

Instead of a serial killer we get a disfigured Bond-era villain with a Bond-style henchman. Mikael Spreitz is scary in a Jaws/Odd-job way as peroxide giant Ronald Niedermann, an East German tough who cannot feel pain (see Reynard, Bond: The World is Not Enough). Fortunately for Salander’s survival, they are both as incompetent as Bond villains.

The screenplay does no one any favours. Of the suporting characters, Yasmine Garbi gets some decent screen time as Salander’s lover Miriam Wu along with professional boxer Paolo Roberto playing himself as a character from the original novel! Short-changed in all this is the riveting Johan Kylén as Jewish police inspector Bublanski, potentially the most interesting new character, sadly almost cut completely.

What we also lose is the central relationship of Salander and Blomqvist who never meet. With Salander on the run, the pining Blomqvist plays a dull game of “Where in the World is Carmen Santiago” – badly. He arrives late, not so much the cavalry to save the day as the passer-by to call the ambulance. It’s left to Rapace as Salander – through the emotional flashbacks, a shooting to add to the usual beatings, administering some torture, blackmail and beatings of her own – to contain the fizz of this sub-Wallander bottle of pop. RC

Robin Catling gained degrees in both arts and technology which led to a diverse portfolio of employment. A freelance systems analyst, project manager and business change manager for the likes of American Express, British Airways and IBM, he moved on to web design, journalism and technical authoring. He has also worked in film and television, both behind and in front of the camera, including productions by Steven Spielberg, Martin Scorcese, Ron Howard and Ridley Scott. A qualified three-weapon coach, he runs West Devon Swords teaching sports fencing to all age groups, and in recent years qualified with the British Federation of Historical Swordplay to teach medieval and renaissance combat in the Historical Western Martial Arts.
View all posts by Robin Catling »
« Review: Amy MacDonald – Life in a Beautiful Light
How-to: Laptop Buying Guide Part One »

4 thoughts on “Review: The Girl Who Played With Fire”