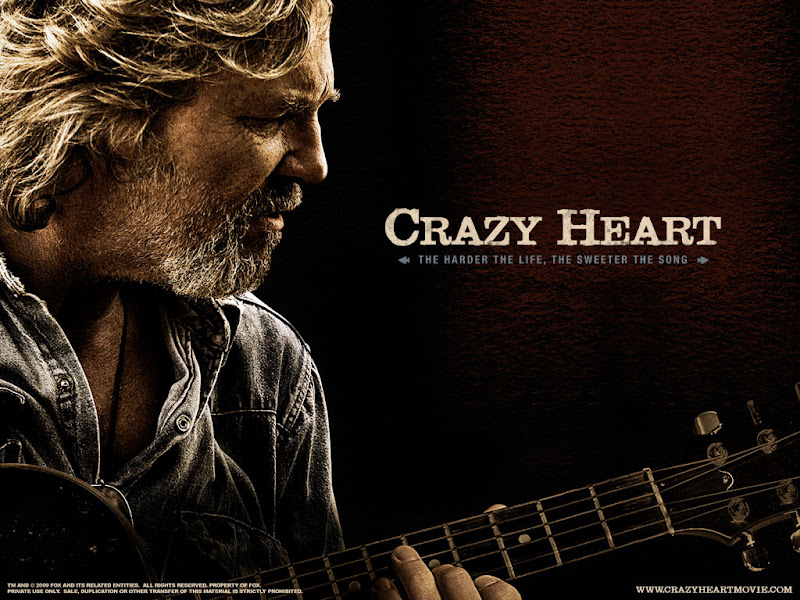 A chance interview with young reporter Jean (Maggie Gyllenhaal) gets him thinking a new life might just be possbile. But as a single mother, a sick and alcoholic Blake is far from first choice step-dad material.

Don’t let the Country music put you off, either. It’s really rather good.

From The Last Picture Show to True Grit, over forty years, Jeff Bridges now has more gravity than Jupiter. With the gravel voice and lived-in face, this is a performance more solid than Mt. Rushmoor and fully deserves the Oscar nomination it received. A credible faded and jaded star, Bridges dons the stetson and guitar and performs the songs with a lifetime’s bravura. You can believe in the talent of a genuine star, so the lows of the broken-down man are all the more agonising.

All of which might brew trouble, if, like so many conventional bio-pics, the central character overloads the picture. Fortunately the supporting cast is excellent. Maggie Ghyllenhall now has the depth to match Bridges and it’s good to see her go head to head without getting steam-rollered by the Bridges charisma.

In the biggest surprise, professional Irishman Colin Farrell makes a decent job of country and Western superstar Tommie Sweet. There’s a couple of good scenes with Bridges, in which Sweet is far from the prima-donna monster Blake describes. Rather it is the young star who eclipsed Blake’s success and who knows how to work the modern music industry. It’s the kind of understated, subtle performance all too rare in Farrell’s portfolio these days, a reminder of how good he can be in the right role – which reminds me I must re-watch Tigerland some time.

Unlike Robert Altman’s rambling portmanteau Nashville, Crazy Heart is a tightly focused, personal journey for Bridges character. Walking a fine line between sentimentality, pathos and tragedy, it may not be the most original journey, but when it’s this well done, just sit back and enjoy the performances.

With a soundtrack featuring T-Bone Burnett and other Country luminaries, the songs are pretty good, too. RC

Robin Catling gained degrees in both arts and technology which led to a diverse portfolio of employment. A freelance systems analyst, project manager and business change manager for the likes of American Express, British Airways and IBM, he moved on to web design, journalism and technical authoring. He has also worked in film and television, both behind and in front of the camera, including productions by Steven Spielberg, Martin Scorcese, Ron Howard and Ridley Scott. A qualified three-weapon coach, he runs West Devon Swords teaching sports fencing to all age groups, and in recent years qualified with the British Federation of Historical Swordplay to teach medieval and renaissance combat in the Historical Western Martial Arts.
View all posts by Robin Catling »
« How-to: Closing Windows Pt.6 (Guest Post)
How-to: Have Some Trust in Hotmail »