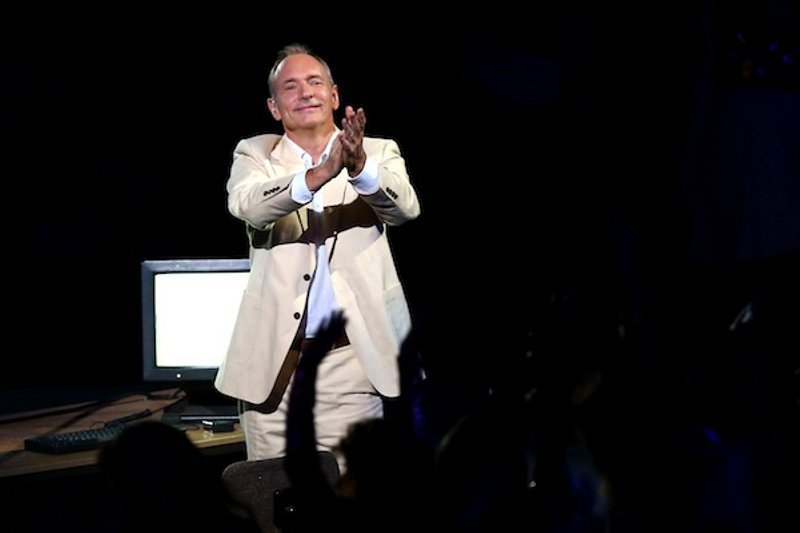 A worthy tribute was made to Sir Tim Berners-Lee, the inventor of the worldwide web, at Friday’s opening ceremony of the London Olympic Games.

Show director Danny Boyle chose to honour Sir Tim as the creator of the information revolution, successor to the Industrial Revolution of the first part of the show.  Amid the musical numbers, the ‘typical British house’ rose into the sky to reveal Sir Tim Berners-Lee, NeXT Cube by his side, live-tweeting during the 2012 Olympics opening ceremony:

The message flashed around the stadium, illuminated on the ‘pixel’ paddles held by 70,500 members of the audience.

“The values and achievements of the Olympics will be amplified by the World Wide Web. It will be like millions of digital torches carrying the spirit of the Games to every corner of the world,” Berners-Lee said, according to a report in Pocket-Lint.

Sir Tim took the applause of the crowd, a good number of whom won’t have known who he was – they do now, as do the estimated one billion television audience. RC

Robin Catling gained degrees in both arts and technology which led to a diverse portfolio of employment. A freelance systems analyst, project manager and business change manager for the likes of American Express, British Airways and IBM, he moved on to web design, journalism and technical authoring. He has also worked in film and television, both behind and in front of the camera, including productions by Steven Spielberg, Martin Scorcese, Ron Howard and Ridley Scott. A qualified three-weapon coach, he runs West Devon Swords teaching sports fencing to all age groups, and in recent years qualified with the British Federation of Historical Swordplay to teach medieval and renaissance combat in the Historical Western Martial Arts.
View all posts by Robin Catling »
« How-to: ‘MakeUseOf’ Guide – Buying Laptop Computers 2012
Review: The Welcome Wagon – Precious Remedies Against Satan’s Devices »