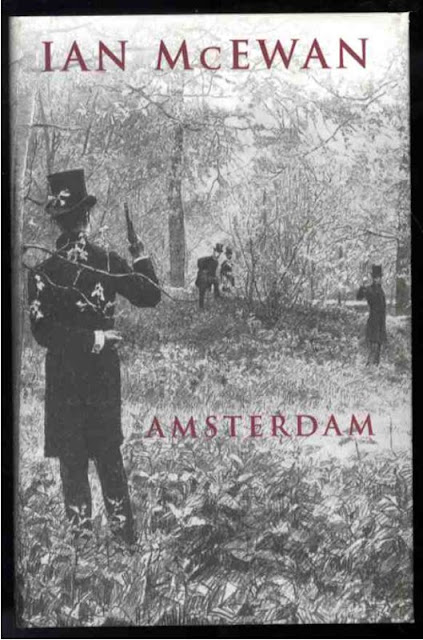 Most of us strive to be heroes, but when we’re vying to achieve ambition, it’s easy to wind up as villains. Amsterdam depicts three high profile characters desperate to create a worthy legacy, but who are sunk by immoral decisions they make on their journey to the top.

Clive Linley, Vernon Halliday and Julian Garmony meet at the funeral of their ex-paramour, Molly, who died of a debilitating illness, the “sick-room prisoner” of the possessive, behind-the-scenes villain of the piece, George Lane. Clive is an internationally-acclaimed composer; Vernon is editor of the eminent broadsheet The Judge, appointed to boost falling consumer figures. Julian Garmony is the Foreign Secretary and, if he plays his cards right, the Prime Minister’s putative successor.

Dismayed at the death of witty hack Molly, the protagonists ponder their own legacies, and determine to avoid a humiliating demise. Clive and Vernon safeguard their dignity by agreeing to euthanize each other should time call for it.

An unexpected plot twist sparks the downward spiral of each man’s career. George Lane shows Vernon risqué photographs, taken by Molly, of Garmony cross-dressing. Vernon publishes them to promote The Judge, causing a rift in his friendship with Clive who declares it is an insult to Molly. Clive’s turn for moral humiliation emerges when, hiking in the Lake District, he has a musical epiphany minutes before a man assaults a woman. Desperate to record a score that will secure him virtuosic fame, he dismisses the fight as a marital row, only to find out that the attacker was a rapist. More plot twists quickly ruin the reputations Vernon and Clive have spent years building.

Garmony’s career takes its own downturn. His wife’s loyalty in spite of the photographic revelations gives him a parachute to ease the fall, but he still ends up back at ground level. Nothing, however, can prepare us for the denouement in Amsterdam when we realise how formidably significant the opening funeral is.

Amsterdam may be a modern moral fable, but it is also about endings – the death of people, the demise of careers, the eradication of an immaculately crafted public image. Characters imagine they are working towards success, but are in fact working towards the opposite. McEwan has that rare talent of writing a thrilling novel without resorting to sensationalism, although the ending is sensational enough, and unexpected to say the least.

Well worthy of its 1998 Booker Prize win, Amsterdam’s greatest merit is its simplicity. McEwan doesn’t need an ostentatious style or plot to prove he’s an expert in his field. VP