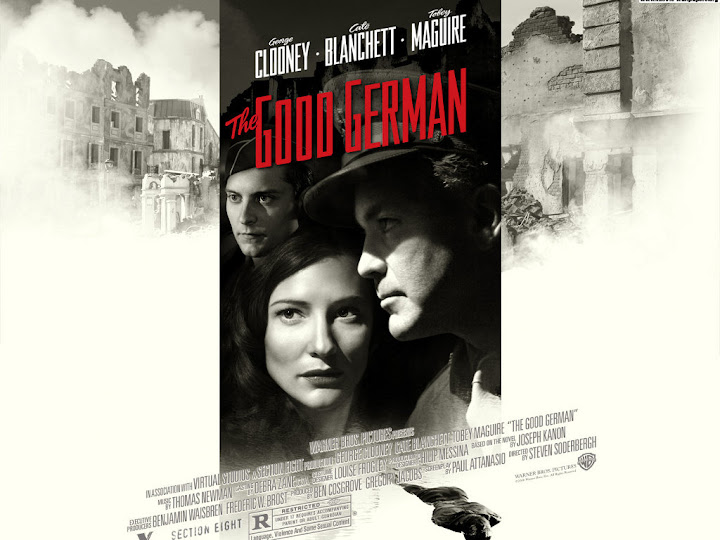 Amidst the horror of the fall of the Third Reich, the chaos of the Potsdam conference and the beginnings of the Russo-American Cold War, reporter Jacob Geismar returns to an devastated Berlin, instantly embroiled in politics, war crimes and murder.

It’s a murky, vicious, murderous Berlin, where half the people are trying to uncover the mis-deeds of the other half. Playing against type, Toby McGuire is the thuggish army motor-pool chancer and black marketeer, soon washed up in the river at Potsdam. There are no heroes, only villains and survivors; Russians and Americans alike are chasing German rocket scientists for the Cold War era, war crimes are excused for expedience.

Soderberg has proved himself a master of modern noir, so why he felt the need to make this ersatz Raymond Chandler pudding is the real mystery. Blurry monochrome and repeated wipes for scene transitions give the false impression of period authenticity, but we’ve too much graphic violence and blood, the script reads like a reinvention of 1960’s and 1970’s thrillers (Quiller Memorandum and Parallax View).

As Geismar, the obstinate would-be private dick with a notepad and a US Army officer’s uniform that counts for nothing, Clooney gets regular beatings from the rest of the cast in typical Philip Marlowe fashion. Anyone else would have given up long ago, but Geismar has his obsession with femme fatale old squeeze Lena (Cate Blanchett).

Blanchett is overloaded with misdemeanours of which overt prostitution is only the beginning; her dark past is portrayed through endless long looks at the floor.  Never looking anything less than fabulous amidst the designer bomb damage of the Berlin sets, Blanchett gets stuck in a clichéd Marlena Deitrich impersonation, with a dodgy accent and a deeper voice than most of the male cast. It’s a studied and well constructed performance and the trouble is you’re only too aware of it. If you don’t believe in her, you don’t believe in the rest of the movie. Soderberg commits so many sins with this script, but the worst is suddenly changing the narrative voice-over from Clooney to Blanchett for no worthwhile purpose.

The movie takes far to long to play out it’s noir-conspiracy tosh (Howard Hawks would have knocked this out in 80 minutes or less), you know everyone has their dirty secrets except for the plot, because Lena’s dead husband is obviously alive a la Harry Lime, so when he gets the line “why does it have to be so complicated” you can only agree with him. But we never find out what familiar face Tony Curran’s Glaswegian barman is doing in Berlin.

Not to spoil the ending, there’s a tribute scene between a guy and a girl at an airport in the rain, with a shiny silver plane to catch. It’s either a either fantastically reversed trope of Casablanca or the most ill-judged assassination of a cinema classic. That stands for the whole movie. RC

Robin Catling gained degrees in both arts and technology which led to a diverse portfolio of employment. A freelance systems analyst, project manager and business change manager for the likes of American Express, British Airways and IBM, he moved on to web design, journalism and technical authoring. He has also worked in film and television, both behind and in front of the camera, including productions by Steven Spielberg, Martin Scorcese, Ron Howard and Ridley Scott. A qualified three-weapon coach, he runs West Devon Swords teaching sports fencing to all age groups, and in recent years qualified with the British Federation of Historical Swordplay to teach medieval and renaissance combat in the Historical Western Martial Arts.
View all posts by Robin Catling »
« Review: Amsterdam – Ian McEwan
Review: The Crimson Petal and the White – Michel Faber »