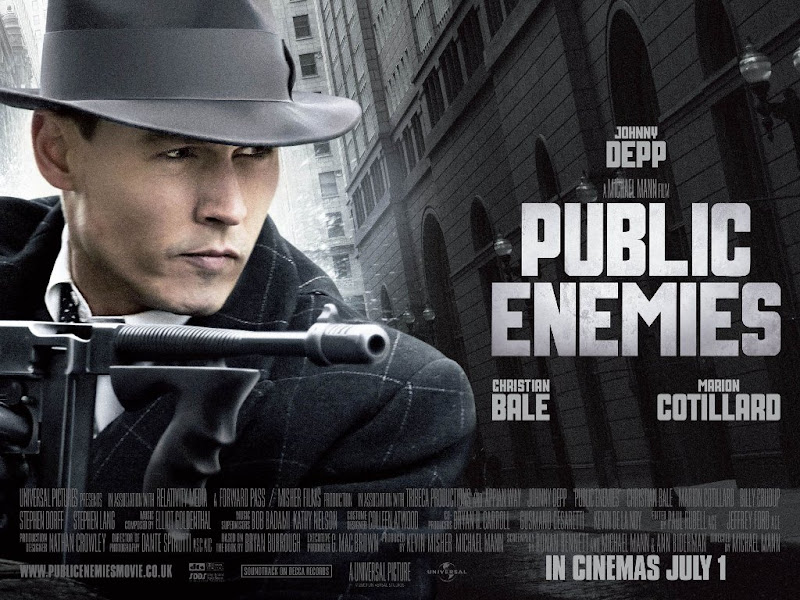 Director Michael Mann competes with his own definitive crime drama Heat, as cops and bank robbers go head to head in 1930’s America.

Real-life Depression-era bank robber John Dillinger’s lightning bank raids made him a folk hero and national celebrity, with the fledgling FBI promoting him to ‘public enemy number one.’ Mann’s movie is essentially a remake of the 1973 Dillinger, a Depression-era Western with hangdog Warren Oates as Dillinger and Ben Johnson as the monolithic lawman Melvin Purvis.

This movie begs comparison with Dillinger and Heat and finds itself lacking – mainly Pacino and De Niro, Johnson and Oates. We’re in typical Mann territory, virile and testosterone-fuelled; casual cruelty and the uncaring society. What we get instead is Mann’s slick visual style and adrenalin-pumping shoot-outs.

Though this movie covers much the same ground as Dillinger, Depp is far to pretty and lightweight for the lead, an ugly but charismatic character in real life. You can see the impish Depp desperately trying to hold in check his Captain Jack theatricality. Where Warren Oates was the amoral powder-keg, Mann lingers on Depp’s flawless features and creates a romantic hero, a Robin Hood for the Depression. Unfortunately enough Dillinger’s workaday violence remains to undercut this ‘rebel without a clue’ act but whippet-thin Depp never looks alpha-male menacing enough to slap around most of his male victims.

Christian Bale growls and twitches his way through his role as Purvis; it’s a one note performance and the same note Bale displays in everything from Equilibrium, 3.10 to Yuma, Batman and Terminator. A bit of passion from either of them would have been good, but Bale turns in his studiously constructed rehash of Elliot Ness, mistaking sulking for acting.

Unlike Dillinger, where there’s precious little sympathy for anyone, Mann tips us too far in favour of his glamorous, reckless young guns, whilst the lawmen are either bland, incompetant or sadists. The robbers takes hostages as human shields and both cops and robbers blaze away regardless.

As a tense action picture, it excels in the several shoot-outs and jail-breaks. There is explosive, graphic violence, the ferocity of the shoot-outs with iconic Thompson sub-machine guns echoes Heat and occasionally goes over the top.

Whilst some facts have been altered to fit the narrative here, the tale of Dillinger’s fall largely retains its’ shape.  Dillinger and Purvis meet only once, as Purvis is growing in awareness and stature, and Dillinger, despite capture, seems unaware of his inevitable demise; a young man’s hubris and belief in his own immortality, while all those around him fall. Dillinger is portrayed as a man out of his time, defying the social mores by playing at the Hollywood gangster and Jesse James.

Michael Mann’s includes all his signature sequences, with plenty of huge closeups of tense male faces; but in high-definition video, it all looks like an episode of TV’s Miami Vice inconsistently dirtied down to look like the 1930’s.

As usual, Mann’s ambitious vision doesn’t quite come together, not in the characters, the script or the droning orchestral score by Elliot Goldenthal which is often far too loud at key moments and punctuated with electric guitar. The uneven script and poor choice of leading men means it ultimately falls short, but I’ll take a soaring Michael Mann failure over most director’s successes any day. RC

Robin Catling gained degrees in both arts and technology which led to a diverse portfolio of employment. A freelance systems analyst, project manager and business change manager for the likes of American Express, British Airways and IBM, he moved on to web design, journalism and technical authoring. He has also worked in film and television, both behind and in front of the camera, including productions by Steven Spielberg, Martin Scorcese, Ron Howard and Ridley Scott. A qualified three-weapon coach, he runs West Devon Swords teaching sports fencing to all age groups, and in recent years qualified with the British Federation of Historical Swordplay to teach medieval and renaissance combat in the Historical Western Martial Arts.
View all posts by Robin Catling »
« Review: The Weekend – Bernhard Schlink
How-to: Speed Up Your Internet Connection For Free »