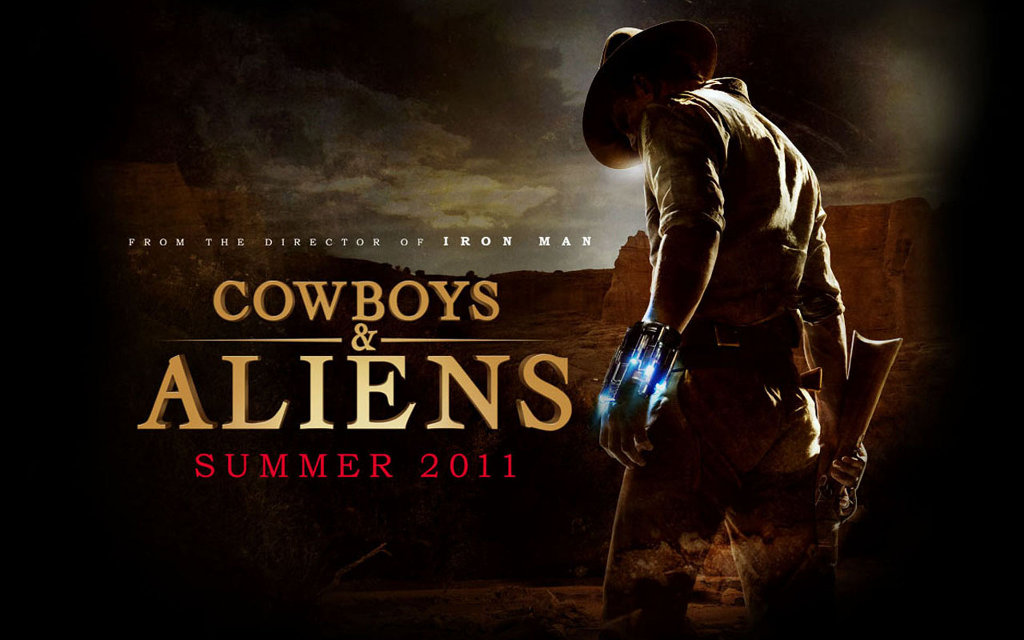 “I know, let’s put James Bond and Indiana Jones together in one of those genre mash-up movies. It’ll make a fortune.”

The cynical desperation of this dumb idea is not the surprise. The surprise is that anyone signed off the $150m cheque to make it. You thought Abraham Lincoln: Vampire Hunter was a dumb idea? Shakespeare, compared to this.

Humourless Harrison Ford mumbles his grumpy way through bad dialog like he’s counting down the days toward death, while a badly miscast Daniel Craig is the cleanest, suave-est Western bandit you’ve ever seen. They both pick up fat cheques whilst staring blankly at a bunch of green-screen special effects while Favreau blows a lot of s*** up.

And I wrote that part of the review before I even saw the movie.

The studio was counting on this Boy’s Own Adventure appealing to both the sci-fi nerds, the old-fashioned Western geeks and the cool kids wanting to try another new genre-buster. Thats an audience of one. Me.

A man with no name (Craig) wakes up with no memory outside a cow-town named Absolution. With only an extra-terrestrial bracelet on his arm, he takes out three bounty hunters, has a run-in with the local cattle-baron’s son, the town sheriff (Keith Carradine) and mysterious traveller Ella (Olivia Wilde).

Revealed as a notorious bandit, Craig’s Jake Lonergan is saved from tough-guy rancher Col. Dollarhyde (Ford) by a massive aerial attack which destroys half the town and kidnaps the other half, including Dollarhyde’s son.

Ford ends up fighting an alien invasion with a bank robber, a boy, a dog, a woman in a summer dress, a preacher and a barman (Sam Rockwell). This being a revisionist Western, the native tribes turn up to lend a hand along with Jake’s gang including Justified‘s Walton Goggins. We get HR Geiger-inspired alien nasties, flying sequences, some nifty alien tech and handsome landscapes.

We also get some nasty violence; guns, bombs, beatings, horses blown up (CGI or not), torture and incineration. There’s also an uncanny and unfortunate recreation of the Challenger disaster footage.

Iron Man director Favreau was hoping for another hit comic-book adaptation, but it’s oddly lifeless; written by the Iron Man committee and produced by a football team of producers including Ron Howard and Steven Speilberg – which is presumably how the cloying sentimentality appears at the end.

The Western elements work ok, the sci-fi fails miserably. Craig tries his best but Ford flounders. Token woman (in more ways than one!) Olivia Wilde gets to do nothing but look sultry and be rescued, final act of reckoning not withstanding. It’s a perfect storm of post-911 paranoia, a United peoples of America fending off Johhny Foreigner in the bloodiest way possible. There’s no joy, no fun and very little originality. Three random teenage boys could have come up with a better script as a weekend assignment.

If you want a real sci-fi Western, check out Serenity. RC

Robin Catling gained degrees in both arts and technology which led to a diverse portfolio of employment. A freelance systems analyst, project manager and business change manager for the likes of American Express, British Airways and IBM, he moved on to web design, journalism and technical authoring. He has also worked in film and television, both behind and in front of the camera, including productions by Steven Spielberg, Martin Scorcese, Ron Howard and Ridley Scott. A qualified three-weapon coach, he runs West Devon Swords teaching sports fencing to all age groups, and in recent years qualified with the British Federation of Historical Swordplay to teach medieval and renaissance combat in the Historical Western Martial Arts.
View all posts by Robin Catling »
« News: Metro Isn’t Metro Any More
Review: Newton Faulkner – Write it on Your Skin »