Review: I am Not Lefthanded – The Fire and The Sigh 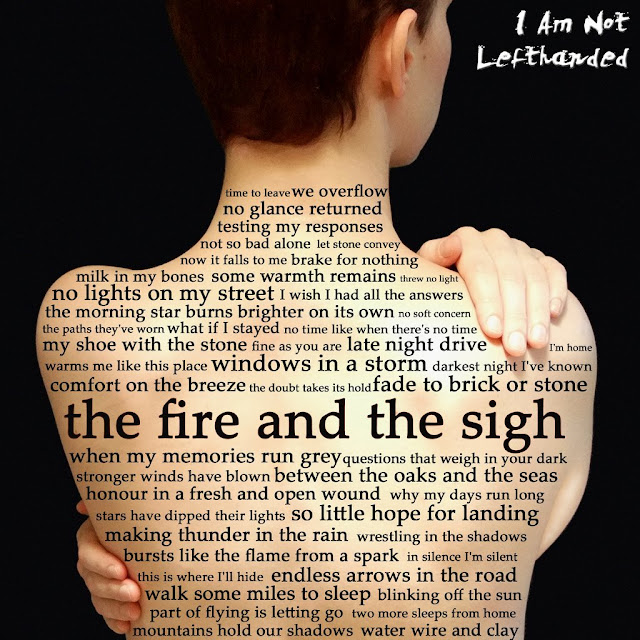 Fiercely independent, female-fronted Irish indie trio I Am Not Lefthanded  are known for their lyrical, evocative songs and quirky home made videos. Playing sparse but uplifting post-grunge music, they’ve been described as sounding like ‘Natalie Merchant fronting Death Cab for Cutie’.

Well, that’s their version. A discovery I made via Dan Lynch’s eclectic music podcast Rathole Radio (ratholeradio.org), the band consists of Kathryn Williams from the far west of Ireland, Belfast-born Daniel Frazer and Benji Savigear, a Cornish drummer.

The Celtic connection gives them a sound close to Amy MacDonald, with a nod to The Cranberries, without taking anything away from Williams characterful vocals and emotive songs. If they sound familiar it may be you heard the band’s music in a number of TV shows and indie films – including a global ad campaign for P&G. With this, their first full album, I Am Not Lefthanded have a fully formed commercial pop-rock sound and I have no problem with any of it.
Brace Brace sets out the stall at a brisk pace. Return is an assertive piece of song-writing set in a neatly minimalist production with real immediacy. You can get in close to this album and almost think of it as a live performance. Spark slows things right down; No Time proves there are no weak tracks in this lyrically strong collection of songs; intelligent narrative and sparing use of cliché means you have words to match the melodies. You can hear all the lyrics but its worth reading, too, there’s some great poetry in there.

Late Night Drive does mainstream rock/pop and could grace any radio station on the planet.
Screamager has that sound of Celtic fiddle, a curious frame for an angry song of unrequited love. Alone (it’s not so bad) is a last quiet introspective pause ahead of the strongest track, It Falls to Me, an uplifting, surefire, mainstream hit.

I Am Not Lefthanded prove there is life outside the pop charts, but if there was any justice, they would be at the top. RC

The Fire & The Sigh by I Am Not Lefthanded
The digital 8-track album  is available for immediate download in your choice of MP3 320, FLAC and other formats for ₤7 GBP  (or more).

Robin Catling gained degrees in both arts and technology which led to a diverse portfolio of employment. A freelance systems analyst, project manager and business change manager for the likes of American Express, British Airways and IBM, he moved on to web design, journalism and technical authoring. He has also worked in film and television, both behind and in front of the camera, including productions by Steven Spielberg, Martin Scorcese, Ron Howard and Ridley Scott. A qualified three-weapon coach, he runs West Devon Swords teaching sports fencing to all age groups, and in recent years qualified with the British Federation of Historical Swordplay to teach medieval and renaissance combat in the Historical Western Martial Arts.
View all posts by Robin Catling »
« Review: Luke Ritchie – The Water’s Edge
Review: The Awakening (2012) »

3 thoughts on “Review: I am Not Lefthanded – The Fire and The Sigh”