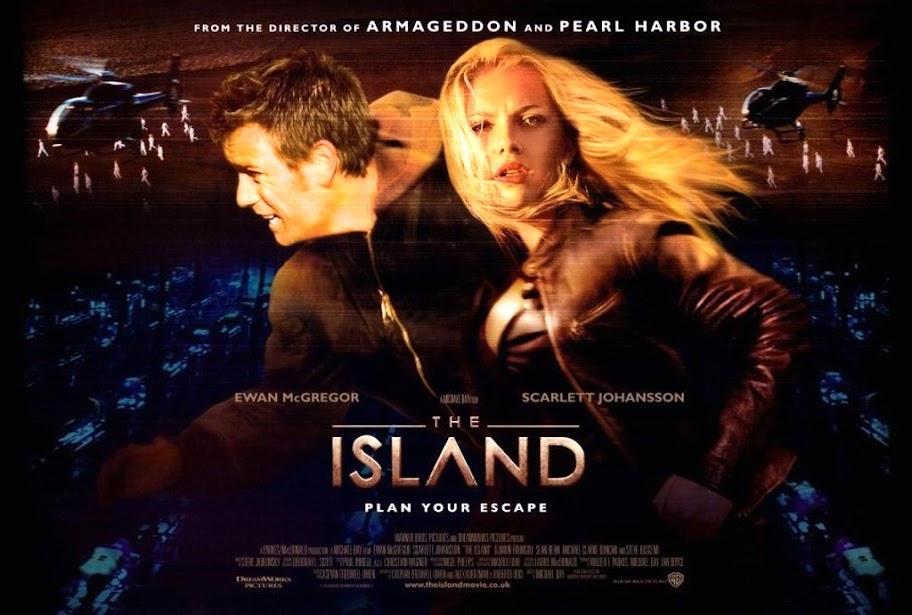 Beginning in a grand Twilight Zone, Brave New World utopia, a white jumpsuited, innocent Lincoln Six Echo (Ewan McGregor) begins to question his confined indoor refuge from a ravaged outside world, while he awaits the next lottery and a place on the paradise colony, the Island.

Only utopia is run by menacing, black-suited doctor, Sean Bean. This can’t be good. He’s got form (Bond, Clear and Present Danger). Breaking out into the backstage tunnels and surgeries of the old air force base, Lincoln discovers his entire community are clones bred as spare parts for their wealthy originals. With Jordan Two Delta (Scarlett Johansson), Lincoln escapes into the real world to find his ‘original’ self…

One of Michael Bay’s better efforts (though that’s not saying much) before he started cranking out Transformer-porn, The Island lashes together the better bits of THX1138, Logan’s Run, The Matrix and his own Bad Boys II without any original plotting or characterisation. For the massive chase sequence in the middle, Bay cranks up the action to eleven and blows up everything in sight. Again. Naturally, Lincoln has to do the right thing and break back into the cloning facility to set things right, so we get effectively a heist movie and a Bond movie climax where Bay gets to blow s*** up. Again.

There are so many things wrong with this movie, I barely know where to begin. Set mid-way through this century, we’ve got perfect human cloning, a government-backed facility and evidently legislation allowing advertised cloning for spare part surgery, available to anyone rich enough, without any qualms in wider society. None of the staff gives the game away to the clones, so they continue live in blissful, child-like ignorance. There goes utopia.

We’ve also got really cool hover bikes and lots of guns. Of course. When the going gets tough, the tough get silly and that means the ludicrously improbable chase sequence in the middle of the movie. Starting quietly like Hitchcock’s North By North-West, into a road chase like Matrix Reloaded, it ends like Total Recall, a mass devastation of buildings and freeways. This is, after all, from the director of Armageddon (loathsome) and The Rock (two hours of my life I’ll never get back).

And still I haven’t said why I like it.

Character. Nobody does anything new, but they’re all on top form. Steve Buscemi rolls out his sympathetic cynic, Djimon Hounsou is a morally dubious bounty hunter, Sean Bean mumbles his villainy without ever raising a sweat.

I tell a lie. Two of my least favourite actors, McGregor (one of the laziest ‘stars’ in the movies) and Johansson (one of the most vacuous) put on the most misplaced star turns to keep me watching this misbegotten project.

McGregor rolls back the years to play Lincoln as the innocent abroad from Trainspotting, while for contrast, he plays the dual role of his Scottish playboy inventor pre-clone ‘original’. Johansson takes the thing seriously enough to give Jordan some guts and some weight (given her ‘original’ is a world’s top model, not bad); so when she starts the ass-kicking, her anger at the world is credible. Between them, the quieter, character driven moments are actually engaging, and Bay gives them enough room for us to realise their predicament.

It’s been said that there’s a very good 90-minute thriller inside The Island, so it’s a shame the film is 136 minutes long. I can’t disagree. However, Bay doesn’t know where to find the scissors, so what you get is by turns bombastic, silly, overblown and yet, at times, dull. One for the hardcore sci-fi fans, I’d say. Doh!!. RC

Robin Catling gained degrees in both arts and technology which led to a diverse portfolio of employment. A freelance systems analyst, project manager and business change manager for the likes of American Express, British Airways and IBM, he moved on to web design, journalism and technical authoring. He has also worked in film and television, both behind and in front of the camera, including productions by Steven Spielberg, Martin Scorcese, Ron Howard and Ridley Scott. A qualified three-weapon coach, he runs West Devon Swords teaching sports fencing to all age groups, and in recent years qualified with the British Federation of Historical Swordplay to teach medieval and renaissance combat in the Historical Western Martial Arts.
View all posts by Robin Catling »
« Humour: Who are you calling Big Nose?
How-to: Windows 8 Start-tip Power-menu »