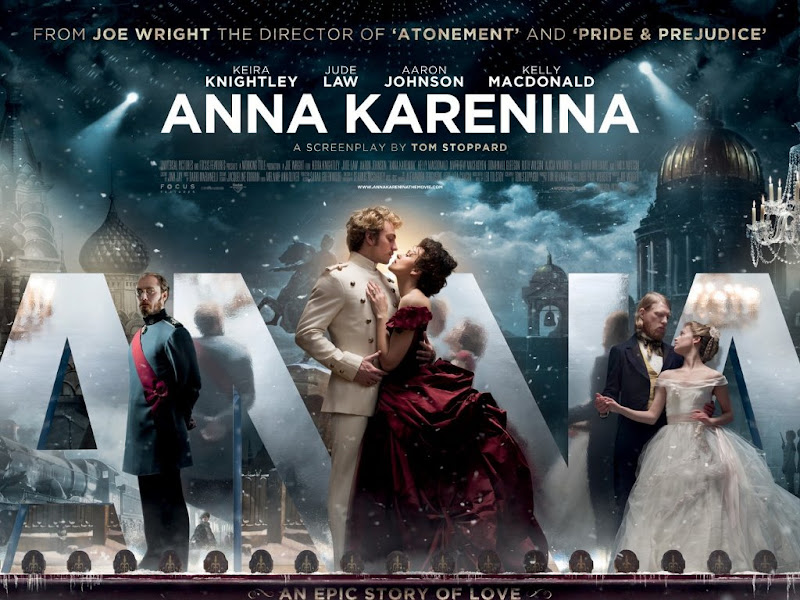 Joe Wright (Pride and Prejudice, Atonement, Hanna) is back with brio, taking on one of the dullest, longest, most unsympathetic clunkers of social commentary novels: Anna Karenina. Feel free to disagree.

Tolstoy’s characters are leaden, frock-coated and bonneted, melancholy Russians, whom cinema has re-made to death over the decades. So Wright has to resort to some wild, theatrical re-invention to make this fly, helped in a large part by writing genius Tom Stoppard.

The traditionalists will hate it. Baz Luhrman, however, may see a sorcerer’s apprentice at work…

The third Wright collaboration with Keira Knightley sees her delightfully cast as pouting, petulant and dissatisfied Anna. Jude Law, never my favourite until the Holmes movies, acquires some depth and a receding hairline and is transformed into a proper actor (if you saw him in Marber’s drama Closer, there’s the contrast). Aaron Taylor-Johnson dashes splendidly as the beau in uniform, Count Vronsky.

The last version I tried to get through was the Bernard Rose 1997 Zhivago-obsessed lump; Sophie Marceau bleary-eyed as Anna, James Fox like an antique dresser and Sean Bean channelling his non-aristocratic TV Yorkshireman Sharpe. You can forget all that.

Rose has been contemporising the Tolstoy catalogue ever since, seeking ‘atonement’. Stoppard and Wright seem to have reached a similar conclusion; tear up Tolstoy’s 950 page opus, forget the Russian locations, go post-modern, set the thing in an 1870’s theatre as a stage play and go wild! It worked for Attenborough’s Oh What a Lovely War. I expect it was cheaper, to boot.

In the theatre, Tolstoy’s huge canvas becomes the microcosm of the Russian aristocracy; Wright can be intimately Liaisons Dangereuse and Stoppard can take us on inventive theatrical theme park rides, setting key scenes in all parts of the theatre. Stylised and handsomely shot, it’s far from the standard costume drama.

Knightley has the tough task of making Anna passionate, alluring, cruel and ultimately mad, without being melodramatic. Thinking back, I keep changing my mind as to her success, so let’s mark this as a ‘good effort’.

This issue may be with Wright’s film-making. Am I the only one who finds him emotionally unengaging? Chilly detachment suited Hanna, but stilted a playfully shallow Pride and Prejudice. Atonement I’ve never got to grips with. Russia may be a cold land, but the Russians live on their passions. I didn’t feel that here.

Like Pride and Prejudice, this may not be the definitive Anna, but Wright takes an entertaining sideways tilt at it and the time flies by. Who’d have predicted that to close a Tolstoy adaptation? SC

Sue Corsten is a film and TV make-up artist based in the UK.
View all posts by Sue Corsten »
« How-to: Permanently Delete a Facebook Account
Opinion: Discovery as a Painful Process in Windows 8 »