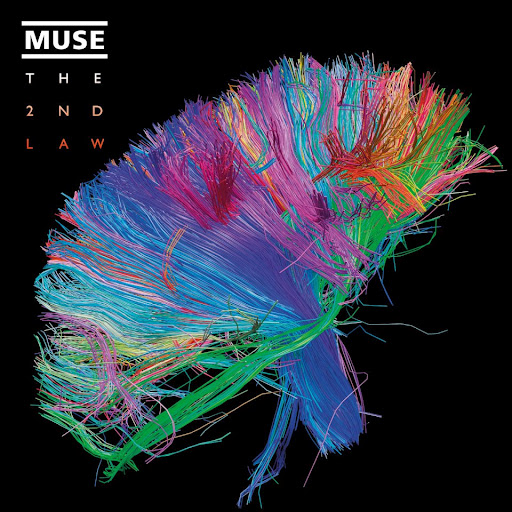 You either like Muse or not, based on Matt Bellamy’s high-wailing vocals over grungy guitar. Of late, Muse has gone through a genre-busting transformation through 70s, 80s, prog-rock, metal and pop. This goes further. Fans may be dubious; new listeners may stop and give it a try.

The Second Law, the sixth Muse album, depicts the human struggle against the second law of thermodynamics – the loss of a little energy in every reaction or exchange, until eventually the reaction dies, still and cold. Cheery old Muse.

What this amounts to is a latter-day concept album; a weird and wonderful mixture of electronica, soft rock, rock-opera, prog-rock bombast, verging on heavy metal. At times it treads dangerously close to rock pastiche. It demonstrates no lack of ambition. Muse maintains the trademark, mournful existential undercurrent of hopeless struggling against the odds.

Supremacy opens like a Bond soundtrack, full of strings with John Barry/ David Arnold chord progressions. Literally, Bond is in there, with a dash of White Stripes in the rock parts.

It may be my ears, but the album version of Madness is much better than the current single on the radio. It has a big dollop of Queen harmonies and Brian May tribute guitar. From a slow build it finally soars – Absolution, without the misery.

Panic Station is a weird 80s throwback (Queen’s Another One Bites the Dust?) with some 70s funk and 70s production. Somebody may have been taking lessons from Scissor Sisters.

Track four is Prelude. No, I don’t get it either. A minute or so of Rachmaninov-inspired piano and big choirs.

Survival. Remember the Olympic ‘anthem’ that never was? The tune supposed to be played at the medal ceremonies (we got Chariots of Fire instead). I’m sure that was a joke. Opening like a Broadway show tune, we’re launched into this off-whack Wagnerian prog-rock folly. Very Muse. Utterly bonkers.

The genre-jumping continues with Follow Me – if U2 re-wrote I Will Survive, this is what it would sound like. Only better.

Animals demonstrates more 70s prog-rock virtuosity. As far as the lyrics are concerned, we’re back with Bellamy’s obsession with the human condition, resistance and struggle. A seemingly quieter track, with guitar tributes to Joe Satriani, it then takes off and ends with a riot. Why not?

Explorers is a gentle melodic lullaby about existential angst and suicide, essentially. Big Freeze: this time it’s global warming and the end of existence. Don’t say Muse shirk the big issues. We’re back in U2 territory with another big guitar solo.

Save Me comes as something of an ambush. There’s a different vocal!?! Bassist Chris Wolstenholme steps up to the mic and delivers this and Liquid State. This is the hard and heavy Muse, a fusion of Foo Fighters and 80s metal bands.

For the finale, the titular Second Law comes in two parts. The 2nd Law ‘Unsustainable’ brings that operatic, orchestral, choral opening again. A glorious melange of physics, entropy, economics, TV documentary voiceover and vocoder backed by a lot of guitar noise. Our economy is Unsustainable. Bellamy’s doing satire again in a high-energy Daft Punk meets James Bond style. Can’t wait to see how they do this one live.

The second part, The 2nd Law Isolated System is that tinkly Mike Oldfield Tubular Bells thing they’ve done before, using more samples and documentary voiceover. It picks up into a Robert Miles trance track, with Muse’s hard-working drummer keeping the whole thing on the rails as usual. Then the whole thing fades away in a whisper. Curious. Anti-climactic. Genre-defying.