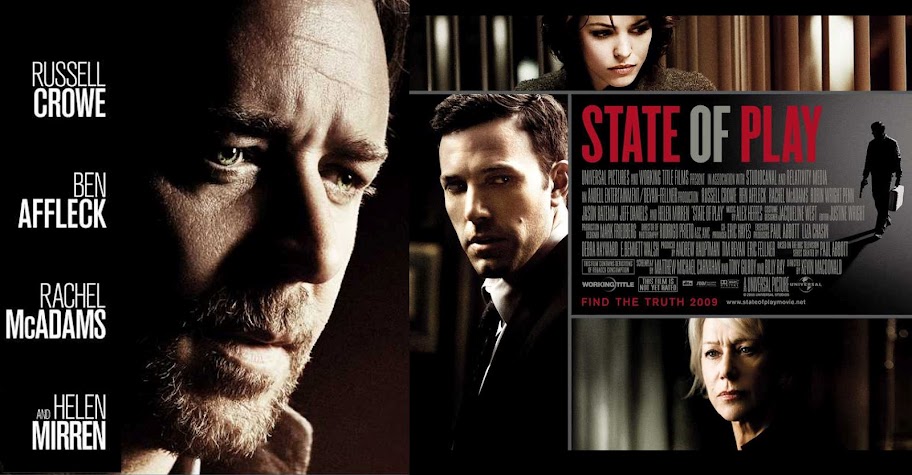 Paul Abbott’s original BBC TV thriller is transformed into Not Quite All the President’s Men, where the best you can think is “workmanlike”.

British director Kevin MacDonald (The Last King Of Scotland) dives into Hollywood for this overdue makeover of the TV three-parter. Despite MacDonald’s flair and dynamism, the performances never rise above a choppy script and the overbearing presence of Russell Crowe.

Perhaps my view is jaundiced by the quality of the original.

It all comes back to the lumbering, ursine performance of Crowe as reporter Cal McAffrey. Crowe is now such an A-list star, his screen persona now drowns any role he takes on. That’s fine for a  Western like 3-10 to Yuma, but somehow his ink-stained gun slinger on the digital news frontier is fatally out of whack in this conspiracy thriller, in which his character is meant to be a grubby, ambitious hack journalist. More on that later.

Ben Affleck does a good job as the campaigning congressman Stephen Collins (sadly they’re never as wholesome or handsome), chair of a defence spending committee and prospective Presidential nominee under a cloud after the apparent suicide of a young female intern. But I don’t believe he and McAffrey could ever be friends in this world. Back in the BBC version, the edgy and slight John Simm was Cal, a political journalist and former campaign manager for the minister.

The personal ties between the pair are a college education and a previous menage-a-trois including the Senator’s wife (Robin Wright Penn given short shrift again).

Rachel McAdams does well as Della Frye, the feisty (of course) young blogger and cub reporter whose story overlaps Macafrrey’s but there’s nothing believable in the relationship. Their competitiveness is mostly McAdams clinging onto screen time, trying not to get wiped out by Crowe. There’s no friendship and certainly no romance (one cliche avoided, then) yet lone dog McAffrey hands over a huge prize by the end – we’re not talking about a gift of a necklace of pens, either.

The TV paper’s editor was Bill Nighy, but Helen Mirren has been drafted, in a nod to modernity, as the British editor-in-chief of the Washington Globe. Mirren adds a touch of class, gravitas and punchy delivery to rein in her reporters, and I still don’t believe a word of it.

But this is all about Crowe. His McAffrey is an older, crumpled investigative reporter of the old school; which doesn’t and never did exist except in Hollywood movies. A short-hand grizzled cynicism conceals a heart of gold and journalistic ideals. Really? McAffrey sets his own hours and trades quips during his West Wing walk-and-talk through the unreal grubby-chic of the newspaper office. His stories apparently bypass the sub-editors and the legal department. He’s so brilliant, Mirren can threaten him with the paper’s corporate owners and the push for sales over integrity – yet he never gets fired.

Crowe holds the screen, but it doesn’t compare with his paranoid corporate whistle-blower in Michael Mann’s conspiracy thriller The Insider.

Script writers Matthew Michael Carnahan (Lions For Lambs), Billy Ray (Shattered Glass) and Tony Gilroy (the Bourne trilogy) take a stab at condensing the BBC material, upping the pace but losing the plot. As a result, the dialog and set-pieces can’t help but slide into Hollywood hokum every other scene.

That is the trouble with conspiracy thrillers. The conspiracy is never as earth-shattering or as deep as everyone wants to think. McAffrey is a composite fantasy character and Collins too unstable for US politics (did I just say that???). Frye too cute and Mirren – is just, well, Mirren. Less Chief Editor than Chief Superintendant.

State of Play is perfectly watchable, but despite references to blogs, the Internet, rolling TV news and CCTV surveillance footage, could have been made any time in the last thirty years. Go hunt down the BBC box-set. RC