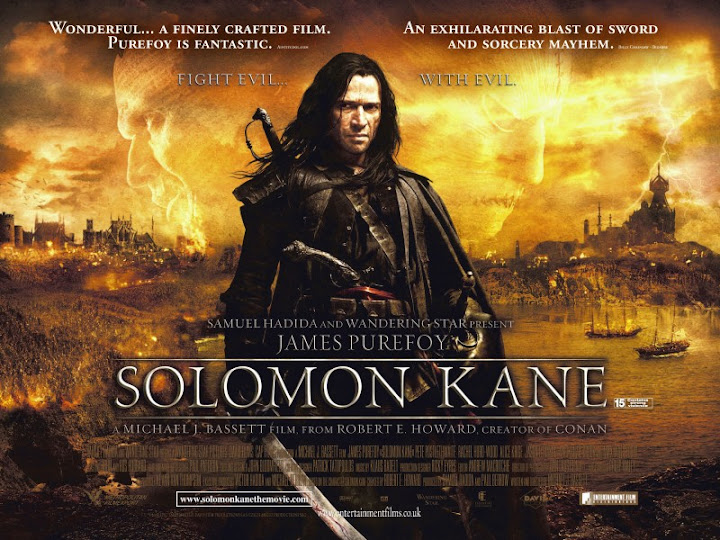 Based on Conan creator Robert E. Howard’s early pulp character from the 1920’s, Solomon Kane is a mash-up of Hammer Horror and post- Lord of the Rings fantasy, set in a Mad Max Elizabethan landscape with a touch of Spaghetti Western, samurai-chic.

Defying the Devil’s Reaper who claims his soul, the pirate Kane retreats to an English monastery to start his life over, only to be cast out of his sanctuary into a countryside infected by plague and supernatural bandits. Falling in with a Puritan family who have sold up to travel to the American colonies, Kane’s peaceful path is broken by the bandits. An oath to rescue the kidnapped daughter of the family becomes Kane’s shot at redemption and the black-hatted and cloaked avenger is born.

The landscapes of this British-Hungarian co-production are suitably grim aided by some passable CGI. The monsters are well rendered mixtures of CGI and actors in prosthetics, right up to the final fire demon. Clearly a cheaper version of LOTR’s balrog, the fire demon is twenty-five feet of flaming skeletal nasty that doesn’t feel like anything more threatening than the bundle of pixels it comprises.

It is of course, Howard hokum, rendered with love and pride by writer/director Michael J Bassett. Purefoy plays it as straight as he can amid the mud, rain and men in latex makeup and gimp masks. Glorious. RC

Robin Catling gained degrees in both arts and technology which led to a diverse portfolio of employment. A freelance systems analyst, project manager and business change manager for the likes of American Express, British Airways and IBM, he moved on to web design, journalism and technical authoring. He has also worked in film and television, both behind and in front of the camera, including productions by Steven Spielberg, Martin Scorcese, Ron Howard and Ridley Scott. A qualified three-weapon coach, he runs West Devon Swords teaching sports fencing to all age groups, and in recent years qualified with the British Federation of Historical Swordplay to teach medieval and renaissance combat in the Historical Western Martial Arts.
View all posts by Robin Catling »
« Review: Ian Hislop’s Stiff Upper Lip BBC2
Review: Canada by Richard Ford »