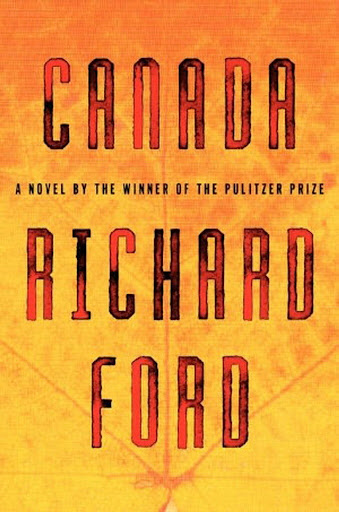 “First, I’ll tell you about the robbery our parents committed. Then about the murders, which happened later.”

Now that’s a hook. That’s what made me want to read on. Sensational? Yes. Direct? Certainly. An Elmore Leonard crime novel? Definitely not. Canada is the story of 15-year-old Dell Parsons’s life in the aftermath of an ill-planned and inept bank robbery.

With its’ American teenage protagonist and dramatic set-up, you expect something between Catcher in the Rye and a lurid Elmore Leonard crime-noir. Don’t.

Knowing nothing of Pulitzer prize-winner Ford’s other six novels, I had no idea of his style or approach. Canada is a long book about consequences rather than actions. Dell Parsons has his entire family life turned upside down, repeatedly and shockingly, yet Ford writes a mixture of lean, sparse prose alongside meticulous sentences stretched over entire paragraphs.

A friend of mine to whom I lent the book described Ford’s prose as elegant and sparse – almost poetry. Ford gets away with it since his narrator, conveniently a retired English teacher, looks back on his teenage years with a certain detachment.

This is an older man meticulously trying to piece together the past, to be unambiguous about every single thing, hence the detailed description of period life, cars, clothes, the small-town routine. The younger Dell loves school, chess and bee keeping. Don’t laugh.

After that sensational hook, Canada takes an age to get moving, one of those slow trains that doesn’t speed up even for the fateful bank robbery. Anyone who can take the drama out of a heist and the arrest of one’s parents deserves some kind of prize.

That’s part one, Great Falls, Montana; fifties America painted as a forlorn place of broken promises, with the young Dell suffering Dickensian tests of character through penury. And yet, the catalyst to the robbery is the beef-smuggling racket with the local Indian tribe that goes horribly wrong. If not for the violence, the whole thing would be comic. It isn’t.

Part Two is the fugitive flight to equally small-town Canada which goes all David Lynch with bizarrely eccentric gangsters oddly placed in the wilds of Saskatchewan. Dell is employed as the odd-job boy for dubious American exile, Arthur Remlinger. Of course, Remlinger’s past catches up with him and Dell becomes accomplice to a killing. Cue second fugitive flight to Winnipeg, 500 miles away – and a complete blank. We’re told nothing about this episode at all.

Part three jumps forward to the retired Dell visiting his estranged and terminally ill twin sister in Minneapolis. Yes, twin. It makes for a significant and ponderous contrast in fortunes.

There are several ways of looking at the narrator’s strangely detached story-telling. You could oversimplify it to post-traumatic stress; Dell recounts his father’s behaviour as a World War Two veteran as a possible motive for the robbery and the odd home life; a man dislocated in time, place and morality. And by the way, Dell’s mother was Jewish. Is it surprising that Dell adopts the defensive stance of the survivor? Stay calm, stay detached, be in society but not belong to it?

He’s not plainly interested in the crimes, being no crime writer, but in the consequences on the younger and older Dell. It’s a slow-burn novel, with no great epiphanies and even the revelations of his parents’ and sister’s fates are dealt with in the same quietly understated prose, from a comfortable distance.

That’s when I realised two things; one, Dell is a passenger, the least engaged or engaging protagonist I’ve read in years and he really gave me little cause to care about him. Two, the whole novel is framed the same way as that great Philip Seymour-Hoffman movie Triple Bogey on a Par Five Hole, about the impact of a calamatous family robbery on the surviving siblings. The movie is, at least, funny.

Mr Parsons the school teacher ends up a little too Dead Poets Scoiety for me. I don’t know what passes for wisdom in American classrooms, but he ends up sounding a bit pompous and a bit Thoreau: “I believe in what you see being most of what there is… and that life’s passed on to us empty. So, while significance weighs heavy, that’s the most it does. Hidden meaning is all but absent.”

After all that description and debate; after Dell Parsons repeatedly tries to define what ‘normal’ life is after these extraordinary episodes and the balance of a life lived… ordinarily. That’s it? I’m not even sure that makes sense. Measured, downbeat, even flat, Canada has very little to do with Canada in the end. It’s a book that takes a long time to get to an existential void. SC

Sue Corsten is a film and TV make-up artist based in the UK.
View all posts by Sue Corsten »
« Movie Catch-up: Solomon Kane (2009)
News: Ubuntu 12.10 Quantal Quetzal is Available »