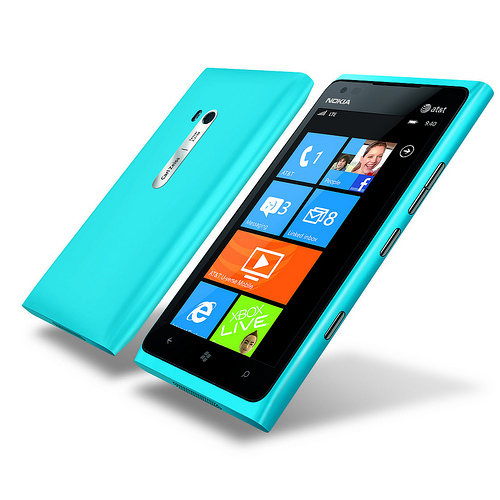 My Android phone developed a fault, so I borrowed a Nokia Lumia phone over the weekend. This is a Windows Phone (trademark, copyright, patented to the eyeballs, Microsoft 2010).

As we all know, Windows Phone is NOT Windows Mobile 5, 6 or 7, or Windows CE, which were mostly taken up by corporate customers and which were utterly hateful. Microsoft’s iPhone-killer and answer to the Android challenge, Windows Phone 7 with the now infamous Metro tiled interface launched early and lacked obvious features such as copy, paste, and wireless tethering.

Despite good reviews for the rest of it, Windows Phone 7 didn’t sell in massive numbers…

Having learned from the mess that Windows Mobile fell into, Microsoft has tightly licensed Windows Phone 7x, so that any device to be sold running Windows Phone 7.5 (nick-named ‘Tango’) has to meet a minimum device specifications:

The hardware buttons are not all hardware or buttons: there are three “soft keys” on the front of a Windows Phone 7 device:

The three hardware buttons on the side.

The close specification and tight license means that Microsoft has solid control over the platform, copying Apple’s model and avoiding the fragmentation of Android, where the manufacturers were able to modify and ‘skin’ the Android operating system with a variety of more or less awful customisations and manufacturers’ ‘crapware’ – excuse me, but that’s the common term for the software layered on top of Android.

The usual suspects all make Windows Phone models which are now being more heavily subsidised and promoted, so you should be able to get your hands on, for example;

You can also find PC makers in the smartphone market;

Modern/Metro is based around larger tiled icons than iOS or Android. They are larger so that anyone can use them regardless of fat fingers and thumbs, but also large enough to display some dynamic information on the tile itself. Windows Phone 7x has no need for status bars or notification areas, everything is displayed and updated in the relevant tile; Weather tile, phone tile, calendar tile.
You can drag tiles around the screen into any arrangement on the Start screen – although this will only display in portrait orientation.

Windows Phone 7x User Interface
It’s for use on a smart phone with a touch screen. The gesture support is not unfamiliar to iPhone and Android users:

Visual cues that you will see on-screen include Ellipses (“…”); these indicate a hidden menu. Tap or drag these dots to view the  available options for that app.

The keyboard appears overlaid on any web-page or app when text input is required. The main keyboard comes up in the default language, showing lower case characters with the shift key switching to upper case and the “&123” button switching to numbers and symbols.

Depending on the app context, the keyboard can show short cut keys such as “.com” for web addresses – tap and hold this to choose other common top level domains such as .net or .org.

We haven’t yet looked at Hubs, Social Media, Search Speech recognition (it’s not Siri), SkyDrive and other Cloud services, Microsoft Office Mobile (yes, really, an Office compatible suite on a 4-inch touch screen), gaming or the Microsoft Store. More on that next time.

Oh yes, depending on your carrier, you may find it also makes phone calls. More or less. AJS

Allan J. Smithie is a journalist and commentator based in Dubai.
View all posts by Allan J. Smithie »
« Review: Adele – Skyfall Theme
Review: Person of Interest Season One »