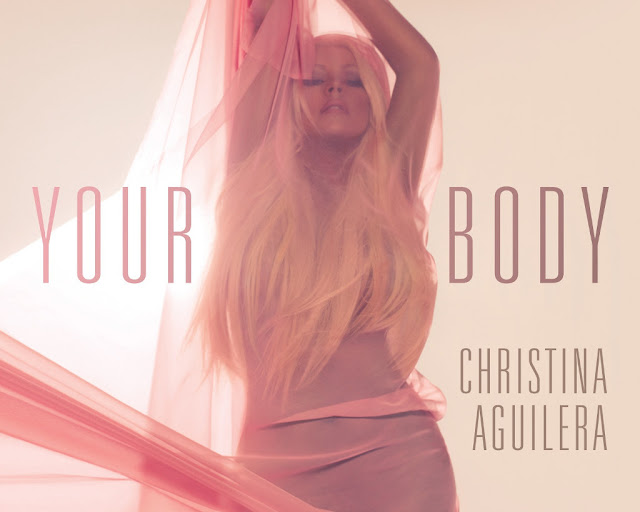 Few singers get the one name moniker – Maddy, J-Lo, Mariah, Beyonce, and Christina (no, not Perri!). La Aguilera is back after babies and divorce. The former Mickey Mouse Club teen sensation with the big voice is back. But it feels like a ‘me-too’ knock-off, as if competing with the new girls means losing her distinctive sound.

After 2010’s Bionic album did mediocre business, RCA and ‘Xtina’ have entered the re-invention stakes with a dance floor pounder and a free radio play-list magnet stuck on the back. The famous Aguilera pipes are buried so far down the mega-production wall of noise, that for the first three plays I thought it was one more from the Kelly Rowland production line. Only when Aguilera lets loose on the bland chorus can you spot that it’s her.

Sadly, Your Body is a cliche-loaded embarrassment of a song, straight out of the Usher Book of Anonymous Sex; “So don’t even tell me your name/All I need to know is whose place.” The radio-friendly version “All I wanna do is love your body,” has an altogether more explicit lyric, no doubt to stir up a storm with the Parental Advisory sticker for parents buying the album Lotus over Christmas (release November 13). I’m not sure this is the best re-invention strategy.

Worse, a frankly bizarre video for the song has Xtina as an uneasy combination of white trailer trash and PG-13 Serial Killer – paint and glitter are not adequate substitutes for blood when the weapons of choice are a large blade and a baseball bat. Will Xtina fans take it as intended or take offence? She looks like a cast off from Jersey/Geordie Shore through most of it. It’s whacky, trashy, completely unsexy and not at all funny in the way I assume it’s intended. I fail to see how it’s meant to sell a bland song. Or is it merely a diversion, the car-crash fascination for the video makes you forget how worthless a track your Body is? SC