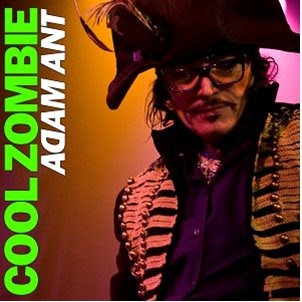 Cool Zombie is the first single from Adam Ant’s new album Adam Ant Is The Blueblack Hussar In Marrying The Gunner’s Daughter which is scheduled to be released in January, 2013

As is widely reported, latest pop act on the come-back trail is Adam Ant, whose new single, Cool Zombie is now available for on iTunes and Amazon. You can find an audio preview of the studio recording on YouTube. With over 5,000 views in less than 10 days for a 90 second sound byte, it seems the public’s curiosity for Adam Ant abides.

Although that may have as much to do with his sudden departure from the music business. Ant (Stuart Goddard) toured a lot around the millennium’s turn in 80’s revival line ups, with the likes of Belinda Carlisle, Bananarama and Spandau Ballet, brought to an abrupt halt when he was put into hospital with bi-polar disorder (among the kinder reports). The rock’n’roll lifestyle and the pressure of living up to the many faces of Adam Ant seemed to take their toll on the diminutive popster famous for Prince Charming, Stand and Deliver and of course, Ant Music. The short solo career, minus band of Ants, went as far as Goody Two Shoes and Deutscher Girls then fell off a cliff.

But like so many in the music industry now, Goddard refuses to hang up his leather trousers and clear the stage. According to Goddard himself, heard in a BBC Radio 2 interview with Jo Wiley a few days ago, he has travelled some and spent two years living in the backwoods of American’s Southern Blues country.

Well, he’s back. The single Cool Zombie is the usual mix of art school pretension and silly pop posturing over a bluesey drum and guitar backing track. It’s a mix of Dylan, the Stooges and some characteristic Ant wailing in the background. It plods a bit, lacking the ‘oomph’ to raise it to TV theme status – it could so nearly be the opening credits song to another Breaking Bad or Justified. True Blood is well out of reach. But as a piece of pop to which to listen?

Even for those who have loved Adam Ant since 1979 (never my personal taste, but the teenage girls lapped him up) this song is unlikely to rocket Adam Ant to the top of the hit parade. Sorry. Nothing actually wrong with it, other than it sounds like an Ants album track.

As a promotional booster to ticket sales on his forthcoming tour, it is garnering plenty of interest. Based on recent live show recordings, Cool Zombie is well within his range, and, despite looking like Bob Dylan playing with the dressing up box (spectacles, grandad moustache and Napoleon hat with feathers), he still has some star quality.  SC

Sue Corsten is a film and TV make-up artist based in the UK.
View all posts by Sue Corsten »
« How-to: Watch Digital TV in VLC Player – Ubuntu
Opinion: Eleven Things I Hate About Ubuntu »