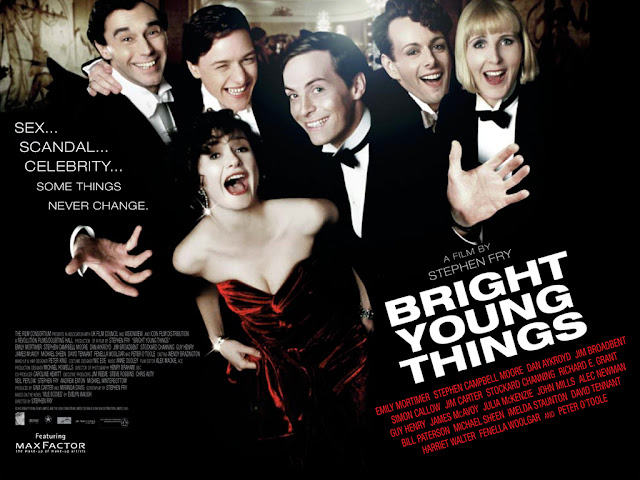 London’s aristocratic offspring party hard between the wars in Stephen Fry’s directorial début, an adaptation of Evelyn Waugh’s 1930 social satire Vile Bodies. It’s a surprisingly modern tale for our celebrity and gossip obsessed times. Indulging in sex, drugs and jazz, they are the target of the gutter press, tabloid gossip columns and paparazzi, the old respect for social rank all but gone.

It’s taken me five attempts to see this through, purely because of the source material; I just can’t love Waugh’s upper class twits as much as Fry. His script and direction are assured and energetic, the fine ensemble cast are fitted to a T. The only thing missing is Hugh Laurie and Fry himself in full Blackadder mode.

No, it’s Waugh. From the moment Stephen Campbell-Moore as the hapless would-be author, Adam Fenwyck-Symes returns to England and has his manuscript impounded, he plays the typical Waugh hero; hopeless yet lucky, helplessly storm-tossed on the seas of fate, forever making congenitally stupid, naive and gullible decisions. Is he so feckless as to win £500 (worth about £10,000 now), bet double or nothing, win then give the whole £1000 to a complete stranger, a drunk racing pundit? Apparently so.

A cartoonish buffoon for two thirds of the movie, Adam’s smart-set includes a luminous Emily Mortimer as socialite Nina Blount. Larger than life are Fenella Woolgar, James McAvoy and an outrageously camp Michael Sheen. These young people inhabit a world about to disappear, drenched in an ‘end of empire’ feeling, the party’s almost over. A young generation of over-privileged, shallow and bored young people, their inevitable fall manifests in madness, suicide and disgrace.

Adam goes through a Dickensian hero’s journey surrounded by a cast of comic caricatures – Jim Broadbent, Julia McKenzie, Peter O’Toole, Simon Callow and, unfortunately, Dan Ackroyd; scene-stealers all. The only man out of place is David Tennant as a queasy and dubiously rich chancer.

The trouble is, Fry spends so much time establishing this feckless lot partying, drinking, taking drugs and behaving badly – or on Fenwyck-Symes various mishaps and episodes – that the final third of the film is rushed. By the time they acquire any depth, they are facing their final curtain. The cast are grappling with broad-brush caricature, huge dollops of coincidence and bad plotting.

Fry also moves events along to the late 30’s and the outbreak of war and here it deviates from Waugh’s relentless satire and casual cruelty to his characters; instead Fry gives us heroism, World War II, a fine romance and some moral reformation.

It’s a handsome, witty, if uneven film, far from the usual ‘heritage cinema’ of literary adaptations. I just wish it had been Wodehouse and not Waugh. RC

Robin Catling gained degrees in both arts and technology which led to a diverse portfolio of employment. A freelance systems analyst, project manager and business change manager for the likes of American Express, British Airways and IBM, he moved on to web design, journalism and technical authoring. He has also worked in film and television, both behind and in front of the camera, including productions by Steven Spielberg, Martin Scorcese, Ron Howard and Ridley Scott. A qualified three-weapon coach, he runs West Devon Swords teaching sports fencing to all age groups, and in recent years qualified with the British Federation of Historical Swordplay to teach medieval and renaissance combat in the Historical Western Martial Arts.
View all posts by Robin Catling »
« How-to: Try Chrome OS Without a Chromebook Part One
How-to: Use Google’s Diagnostic Page »