Review: Leslie Hunt – Your Hair is on Fire 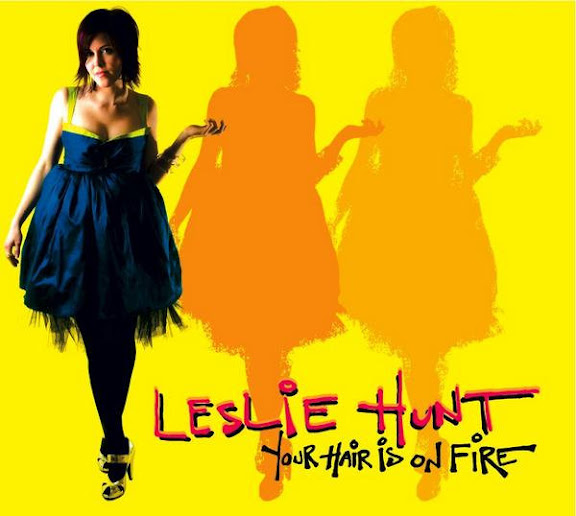 “This album is a collection of songs ranging from heartbreak to first dates and back. What sets Leslie apart is that she straddles two extremes: a witty, bouncy pop artist in brightly colored dresses who is pitted against her darker self, a sensual, piano-crouched exhibitionist. Whether it is a cheerful, hook-heavy pop tune about love or a dark and insightful ballad of self-discovery, Leslie Hunt’s music is a window into a her soul for any listener willing to look.”

This is not a new album, but a release from 2009 which came as a recommendation from the eclectic playlist of Dan Lynch on  Rathole Radio (‘Tomorrow’s Best Music’). You can get hold of the album free and legit on Jamendo.

Hunt has a fantastic voice and unlike say, Kelly Clarkson, a much more rounded repertoire of largely self-penned songs. Hunt writes lyrically grown up, often anguished, often playful songs. I missed her brief moment in the spotlight on American Idol, but I suspect she’s too quirky for that audience, difficult to corral into any convenient pigeon hole.

From the opener American Dream Man, a bouncy up tempo pop tune, the quirkily named title track Your Hair is on Fire glides into Tracy Thorne/Everything but the Girl territory in sound and structure, with a middle eight that is Paramour-lite. The album really takes off with All the Way, if KD Lang got to sing a Bond theme, this would be it. Let Them Go is a longing for a happy ending.

The stand out track that first drew my notice is Way Too Much, back in a Tracy Thorne groove (but with banjo), sweeping through a full sultry range. First Date is another big bouncy, optimistic pop tune, that reminded me of eighties jazz-pop act Swing Out Sister. I Only Care About You When You’re Gone just goes to show there’s not a weak or bad track on this album.

Alone Tonight and I_ (the most EBTG track yet) return to more anguished material, while Down Day is almost Evanescance in tone. Lonely Home comes in a jazz lounge style, then Sea I Provide is almost big finish Paramour rock track (without the anguish and the noise). But then comes Open Your Eyes, going the full Swing Out Sister / Kelly Clarkson mile, by turns moody, poppy, rocky and electro – with a Beatles’ chamber orchestra break. It’s a tour de force finale.

Robin Catling gained degrees in both arts and technology which led to a diverse portfolio of employment. A freelance systems analyst, project manager and business change manager for the likes of American Express, British Airways and IBM, he moved on to web design, journalism and technical authoring. He has also worked in film and television, both behind and in front of the camera, including productions by Steven Spielberg, Martin Scorcese, Ron Howard and Ridley Scott. A qualified three-weapon coach, he runs West Devon Swords teaching sports fencing to all age groups, and in recent years qualified with the British Federation of Historical Swordplay to teach medieval and renaissance combat in the Historical Western Martial Arts.
View all posts by Robin Catling »
« How-to: Try Chromium OS Part Three – Bootable USB
Cranking it Out Daily »

3 thoughts on “Review: Leslie Hunt – Your Hair is on Fire”