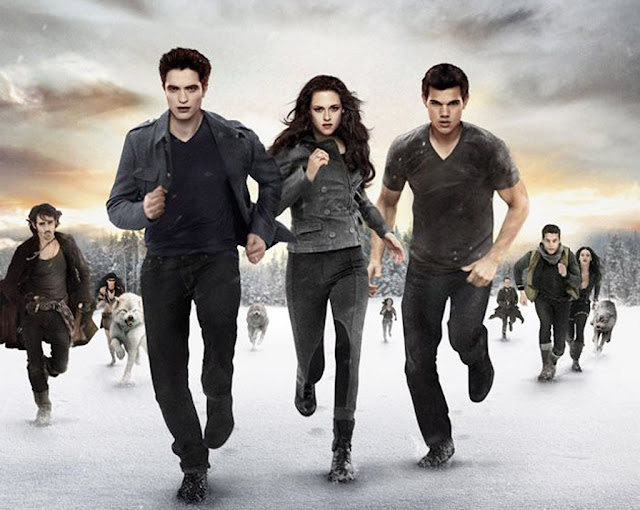 Stephanie Meyer’s vampire-werewolf saga concludes with the fourth of three volumes, a camp, ludicrous, melodramatic pantomime of a climax. R-Pats and K-Stew try their best to steam things up in this sexier 12-rated comicbook-horror, only to be let down by a poor script, plotting and Meyer herself producing Melissa Rosenberg’s screenplay. The Avengers this ain’t.

In this fifth film, Bella Cullen is restored as new-born vampire, new mother and super-heroine as a combination of Supergirl and Wonderwoman, but still with the teen-Bridget Jones tendency to whine.

But it’s my only time in the cinema when the whole audience hit a plot twist and said “wha- what?!?” out loud.
Fans of the teen vamp romances have sat through this uneven series of movies in expectation of a triumphant Bella walking into the sunset with her immortal beau. But as fourth series director Bill Condon captains the listing ship to its final harbour, lurching between the marker buoys of Meyer’s novel, this feels like a series of unfinished sketches, littered with bad CGI set pieces, wholly unconvincing wire-work and blur-motion, and capped by bad CGI face-replacement (the baby and toddler in particular). Even R-Pats’ piano-playing hands are CGI replacements this time.

Much of the comedy is unintentional. Edward and Bella’s daughter gets a laugh the first few times Renesmee is mentioned. Then a joke about nicknaming her ‘Nessie’ after the Loch Ness monster is completely ill-timed and ill-judged, in a movie full of mis-steps.

The threat from the Volturi, the vampire mafia, led by Michael Sheen, is this time aimed at Renesme, wrongly identified as an illegal vampire child. The quest element of the movie is gathering ‘witnesses’ to counter the Volturi and prove the child is no threat; cue mini-travelogue of the Cullens gathering a multi-ethnic vampire friend list with the most absurd collection of vampire ‘talents’ – super-powers that make DC Comics’ Justice League America look like documentary.

Filled with the weirdest looking parade of ‘pretty’ people with badly coloured contact lenses, designer stubble, fur, and ethnic costumes – if Vivienne Westwood hosted a fancy dress party for Best Cosmetics Section Saleswoman from your local department store, you could take it more seriously than this.

Michael Sheen does a high-camp turn as the Vampire ‘Il Duce’, Aro, in black with gold braid, a Gothic fascist dictator with huge shoulder pads and a cloak (but no neck). Sheen leaks previous outings as Kenneth Williams and David Frost, yet somehow still works as a principal villain, an army of black hooded minions at his back. Among his tedious cronies, Jamie Campbell-Bower spits venom, while Christopher Heyerdahl continues his long-faced, languid and world-weary growling.

So Breaking Dawn winds up being campy and funny and over-the-top, creaking under the weight of its own mythology and a million miles away from the first Twilight, the tiny, low-key, vampires-in-a-small-town story. Not that the fans or casual movie-goers will care.

It is all so confused that in a major re-working of Meyer’s plot, it is Alice, not Bella, who ultimately saves the day, but to give away any more would ruin the best moment of the whole series, the one thing that is worth seeing in Twighlight Breaking Dawn Part Two. Altogether, now; “wha- what?!?” RC

Robin Catling gained degrees in both arts and technology which led to a diverse portfolio of employment. A freelance systems analyst, project manager and business change manager for the likes of American Express, British Airways and IBM, he moved on to web design, journalism and technical authoring. He has also worked in film and television, both behind and in front of the camera, including productions by Steven Spielberg, Martin Scorcese, Ron Howard and Ridley Scott. A qualified three-weapon coach, he runs West Devon Swords teaching sports fencing to all age groups, and in recent years qualified with the British Federation of Historical Swordplay to teach medieval and renaissance combat in the Historical Western Martial Arts.
View all posts by Robin Catling »
« Cranking it Out Daily
Review: Skyfall »