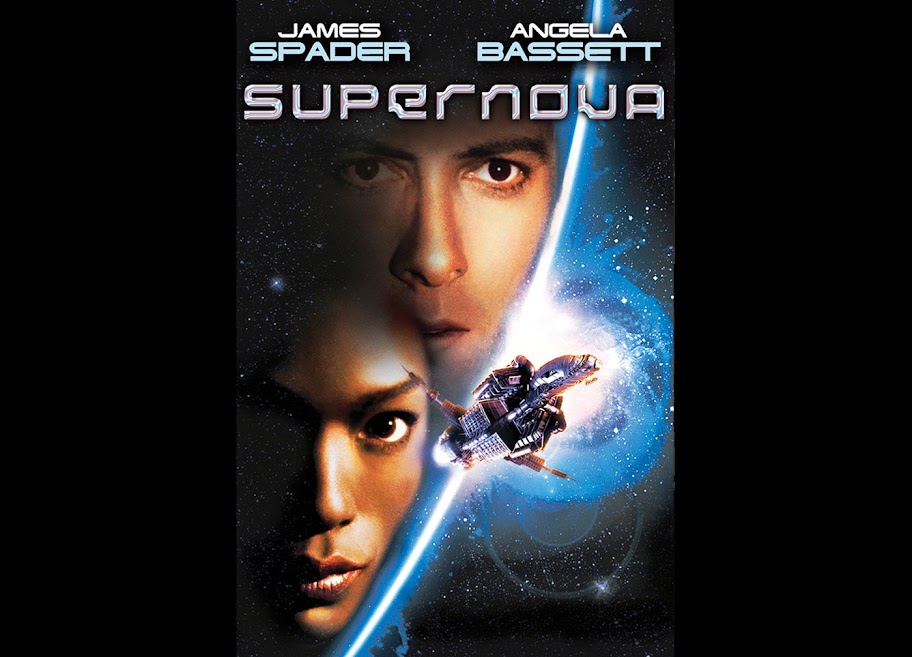 This should have been better, a big budget sci-fi spectacular with James Spader and Angela Bassett… but a production so troubled, actual directors Hill and Scholder removed themselves from the credits.

A 22nd century medical rescue team crosses deep space in an inter-stellar ambulance, waiting to answer distress calls. Captain Marley (Robert Forster), pilot Vanzant (James Spader), medical officer Evers (Angela Bassett), medical technician Penalosa (Lou Diamond Phillips), paramedic Lund (Robin Tunney) pick up a distress call from a mining colony. Picking up lone survivor Larson (Twilight‘s Peter Facinelli) and his alien artefact, neither he nor it are quite what they seem, neither is the co-incidence that brings them all together.

With the acting talent on board, this looked so promising and Supernova looks visually stunning, both in production design and effects. Unfortunately the script is a confused and derivative mess made worse by the cuts, edits and re-edits. You can bolt the elements together from the left-over pages of Dead Calm, Alien, Event Horizon and Sphere. By the time the things gets into it’s stride, what we get is Psycho in Space, with a suitably Hitchcock Maguffin, the alien artefact, threatening Doomsday.

If you play the ‘with.. and… but’ game with the cast, then it’s ‘James Spader with Angela Bassett and Robin Tunny, but Lou Diamond Philips,’ whose clammy, lizard features are enough to ruin a movie before he utters a line. Peter Facinelli does his best as predatory maniac Larson and makes this a scary PG-13.

The real surprise is James Spader as action hero. Really. Buffed. In fact the entire cast (Robert Forster excepted) appear to have spent months in the gym getting ripped for this. Must be the boredom when you’ve got months in space waiting for medical emergencies which the talkative ship’s computer then resolves all on its own. Just as well, given the all the running, jumping, crap fighting; shuttle crashes, near maroonings on abandoned space stations and, of course, impending supernovae. Come on, that’s hardly a spoiler. You can probably even guess who comes out alive at the end. RC

Robin Catling gained degrees in both arts and technology which led to a diverse portfolio of employment. A freelance systems analyst, project manager and business change manager for the likes of American Express, British Airways and IBM, he moved on to web design, journalism and technical authoring. He has also worked in film and television, both behind and in front of the camera, including productions by Steven Spielberg, Martin Scorcese, Ron Howard and Ridley Scott. A qualified three-weapon coach, he runs West Devon Swords teaching sports fencing to all age groups, and in recent years qualified with the British Federation of Historical Swordplay to teach medieval and renaissance combat in the Historical Western Martial Arts.
View all posts by Robin Catling »
« Review: Skyfall
How-to: Limit Profile Visibility On Facebook »