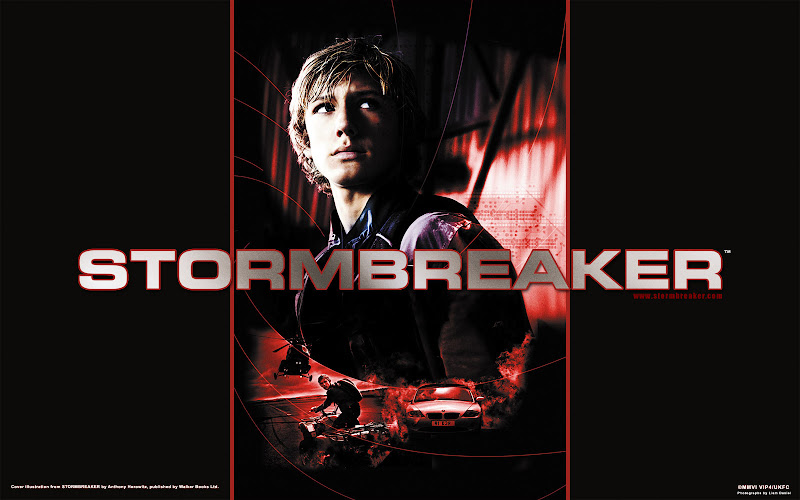 Intended to kick-off a franchise of James Bond Junior movies, this sorry effort had the money and the talent to make a profitable long-running series. Where did it go so wrong? Well, in just about every department. Script, performances, casting, design.

You can see the budget up on screen; hugely glossy by British standards, cheesily cheap by Hollywood standards, but the longer it goes on the more Stormbreaker reminded me of Die Another Day, easily the worst Bond film ever.

The script is the biggest problem. Allegedly adapted by Anthony Horowitz himself from his own successful source novels, this should be Harry Potter Goes Spying. I know this is an early-teens action-adventure movie that is clearly not aimed at my demographic, but I have no idea who the producers thought they were aiming at. It’s too violent for younger kids, too dumb for older teens. There’s no smart layer for the parents, unless you count references to every Bond movie ever made, but they just remind you how superior is every Bond movie ever made compared to this trash. Vastly experienced TV director Geoffrey Sax evidently seemed like a safe pair of hands to the producers, but maybe he was malleable and/or cheap.

Kicking off with the idea to bump off the adult Bond agent in the pre-title sequence – although in this case another gurning Ewan McGregor, give-me-the-fat-cheque cameo – Stormbreaker sets out it’s stall early and then fails to sell you any of it’s maggot-ridden produce for the remainder of the running time.

The script is a laughable re-hash of all the 007’s, with a slice of unintentional Austin Powers spoofing thrown in. Any original thought clearly stopped with the idea to make Alex Rider’s super spy at fourteen year old boy (which he clearly isn’t). The rest is utter dross thinly threaded around a computer ‘virus’ (ha, ha, aren’t we clever) aimed at wiping out most of Britain’s school children, because Micky Rourke’s  billionaire loony (aren’t they all) was bullied at a posh British school as a kid. From there we get secret underground bases, sky-scraper roof-tops, gadgets, gizmo’s, a private army of goons with machine guns, some nonsense about it being a North Korean plot and… oh, I can’t be bothered…

Alex Rider’s escapades are cut together like a cheap 60’s spaghetti Western, lurching from one inept chase sequence, capture and miraculous escape to the next with no logic or reason other than ‘this is what you do in a contemporary spy thriller.’ Die Another Day all over again.

The movie is filled with British talent looking thoroughly embarrassed. Only Sophie Okenedo comes out with dignity intact and that’s only because she’s just so phenominally good in everything (yes, even Aeon Flux). Bill Nighy going over the top with the pauses and twitches in an absurd pair of spectacles; Robbie Coltrane thoroughly embarrassed to be playing the British Prime Minister. Poor Stephen Fry gets to be the gadget-meister based at Hamleys’ toyshop. Damien Lewis turns in the worst cod-Russian accent ever and sleep-walks through various shootings and other villainy.

This doesn’t help since the rest of our villains fare no better. Andy Serkis is largely wasted as a silent Joker-turned-butler sidekick. Misi Pyle produces an Aryan PR assassin so laughably bad that Helga from ‘Allo ‘Allo would be an improvement. Worst of the lot is Mickey Rourke who clearly thinks he’s underplaying his flamboyant psychopath, but is so many sprinkles short of an ice cream that nothing that comes out of his mouth is even vaguely credible. You long for a decent Alan Rickman, Jeremy Irons villain or failing that, Mike Myers’ Doctor Evil at least to deliver these lines with some comic timing and give us some decent laughs. Well, there’s always the rubber jelly fish. Really, there’s a rubber jelly fish. It doesn’t do anything except sit in the tank and look… rubbery. It still turns in a better performance than the superfluous Alicia Silverstone, still in search of a career beyond Clueless.

For the benefit of the International (American) audience, there’s a horseback and Mini Cooper chase across London (Hyde Park, Marble Arch, Lloyd’s building, St Paul’s Cathedral), British bobbies being inept, a troop of mounted Horse Guards, and lots of shots of London’s skyline. There’s the obligatory pretty (as in ‘pretty vacuous’) girl-friend in peril, the dubiously-named Sabina Pleasure (Sarah Bolger) to add to the Bond-cliché’s. The equally pretty (as in ‘pretty wooden’) Alex Pettyfer struggles unconvincingly through this pudding, running, jumping, abseiling, quad-biking and achieving very little; doing the most irresponsible things because that’s what written down for him; a Sean William Scott character in a school-uniform. The difference being that Bullet-Proof Monk was less silly than this.

Robin Catling gained degrees in both arts and technology which led to a diverse portfolio of employment. A freelance systems analyst, project manager and business change manager for the likes of American Express, British Airways and IBM, he moved on to web design, journalism and technical authoring. He has also worked in film and television, both behind and in front of the camera, including productions by Steven Spielberg, Martin Scorcese, Ron Howard and Ridley Scott. A qualified three-weapon coach, he runs West Devon Swords teaching sports fencing to all age groups, and in recent years qualified with the British Federation of Historical Swordplay to teach medieval and renaissance combat in the Historical Western Martial Arts.
View all posts by Robin Catling »
« One Thousand Posts
How-to: Get the Most from Powerpoint »