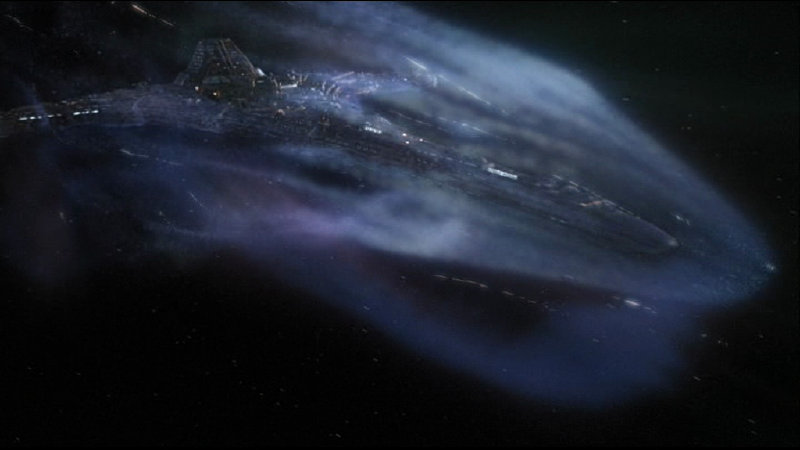 I finally finished Season Two, hoping in vain for a decent story arc to emerge. It didn’t.

Stargate Universe was the ‘Star Trek Enterprise‘ of this particular fanchise; a good idea that tried to do something different from its predecessors but ended up looking like a me-too mash-up of other shows while milking an old idea. Universe carried too much baggage from the previous shows and never really found its feet.

In a post Battlestar Galactica sci-fi genre, Universe decided to go dark. Dark plots, dark characters, and dark sets. Starship Destiny (no cliche there, then) travels faster than light, which must be why none of the lightbulbs worked on board – just the mood lighting in the fixtures and fittings.

SG-1 and Atlantis were fairly daft, conventional sci-fi shows based on an equally daft Stargate movie original – Spaceships of the Gods, Erich von Daniken, Earth deities were aliens, blah, blah. Universe decided to go even further and more momentus; schlep off on an inter-galactic odessey in a million-year old spaceship built by the Ancients (they don’t build ’em like that any more) in search of God. Apparently the Creator autographed the background radiation from the Big Bang. Hey, why not sign your best work.

Given the pedigree of SG-1 and Atlantis, for all their silly, space-opera shenanigans, you’d think Universe would have come up with something engaging. Instead we got variations on old themes, with the occasional space battle in well realised but still unconvincing CGI. Everything was shot in hand-held wobble-cam for that fly-on-the-wall look and it still wasn’t real.

A bunch of good looking actors (not you, Lou Diamond Philips) gave it their best shot, but the crew wound up playing sub- Galactica and the spectre of Star Trek cast a very long shadow.

There was an interlude for a few episodes where opening the stargate inside a star splintered the timeline and dumped a version of the crew two thousand years in the past (don’t you just hate it when that happens); to colonise new worlds, build new life and new civilisations and boldly go where… oops, sorry, wrong show.

Despite some of the best performances and scripts of the whole enterprise (sorry), it was just inter-series navel-gazing, a bit of ‘alternate history’ that happens when a sci-fi show either gets self-indulgent or runs out of ideas. I think it was the latter. The clinching proof? A lack of a decent nemesis for the crew.

What finally chased them out of a galaxy was a bunch of clockwork toys; an army of drones and command ships belonging to a dead race. At least you know there you are with SG-1‘s Egyptian gods or the Klingons – sorry, Wraiths – in Atlantis; some proper villains to boo and hiss. There’s only so long you can mooch about galaxies, moaning about how Destiny is old and falling apart while having no clue and no evident story arc. Fling abuse at Start Trek Next Generation, it did fill the Twilight Zone/Outer Limits slot for interesting and different bit of sci-fi wrapped around a morality tale every week, with decent characters you cared about. Destiny’s crew always wanted to be anywhere but there.

The emotional gloom matched the energy-saving lightbulbs on the ship. How did Firefly manage more drama, adventure and emotion in fifteen episodes than Universe in almost two full seasons?

Instead, Universe just moodled about until the networks decided to kill it. So we got a sort of finale for episode twenty. The doughty Colonel (Louis Ferreira), the grumpy Scientist (Robert Carlyle) and the wide-eyed Boy-genius (David Blue) got the last words while everyone else played their bit-parts. And Destiny carried on falling apart to the very end.

It was earnest. They tried. They boldly went. They’ve boldly gone. Can somebody turn the lights on, now, please? RC

Robin Catling gained degrees in both arts and technology which led to a diverse portfolio of employment. A freelance systems analyst, project manager and business change manager for the likes of American Express, British Airways and IBM, he moved on to web design, journalism and technical authoring. He has also worked in film and television, both behind and in front of the camera, including productions by Steven Spielberg, Martin Scorcese, Ron Howard and Ridley Scott. A qualified three-weapon coach, he runs West Devon Swords teaching sports fencing to all age groups, and in recent years qualified with the British Federation of Historical Swordplay to teach medieval and renaissance combat in the Historical Western Martial Arts.
View all posts by Robin Catling »
« How-to: Get the Most from Powerpoint
Full Circle Magazine Issue 67 Out Now »