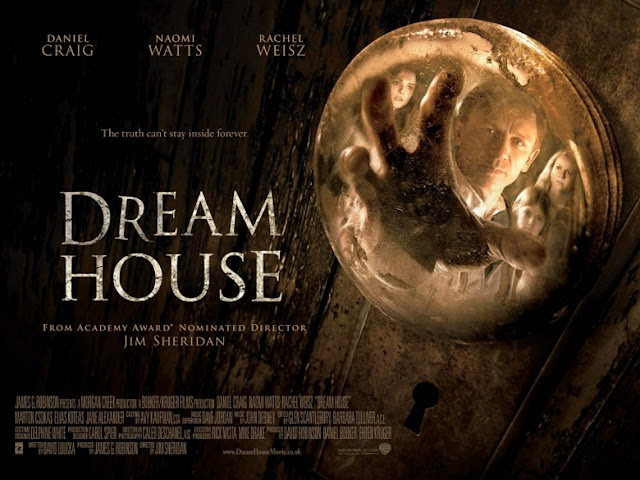 I hate to say this but Daniel Craig has poor form with his movie choices. Invasion, Cowboys and Aliens, now Dream House; a supernatural-horror-mystery-thriller, re-cut by the studio without the director, where the cast disowned it as simply not good enough.

Daniel Craig is hotshot book editor Will Atenton, who decides to drop out of the Manhattan rat-race (boo-hoo) to spend more time with his family (Rachel Weisz and twins Taylor and Dee Dee Geare) and yet still write a novel (mutually incompatible activities).

Their all-American clap-board house in Connecticut has chilly neighbours,  random trespassers and was where a family had been murdered five years earlier – supposedly by the father who’s just been released from a  psychiatric hospital. Already you know this won’t end well…

Joining Craig and Weisz are Naomi Watts and Elias Koteas under a renowned director Jim Sheridan (My Left Foot, In the Name of the Father).

Sold as Black Swan meets The Shining, we have ghostly goings on, children in peril, haunted houses and a madman on the loose threatening Cape Fear violence.

One simple question, Mr Craig, if you’ve so much money why not just move out of the house after ten minutes? Don’t wait for someone to run you over in your own driveway! But no. Craig decides to sit it out, so must we.

Screenwriter David Loucka plants a big reversal at thirty minutes, which is way too early in a one hour thirty movie, but still thinks he can get away with it; a question of mistaken identity and mistaken haunting (if such a thing has credence). It hardly makes for a unique selling point and reeks of desperation. Perhaps the studio edited the reels in the wrong order.

To solve all this, Craig ends up running to and from neighbours the Pattersons (Naomi Watts and teen daughter Rachel Fox from Desperate Housewives), estranged from husband Jack (Marton Csokas). Craig does his best to hold our sympathy but has to play unhinged for the sake of the plot. Weisz and Watts are luminous, but asked to deliver ludicrous dialogue.

Dream House has too many set-ups; loving-family, doomed-family, sane-insane fathers, stalkers, ghosts, murders, asylums. Then is blows the lot and settles for full-on bonkers, by which time you don’t care about any of them.

Lurching about between genres between first second and third acts, Dream House is disjointed and episodic. It is shamelessly derivative of other films, disappearing up the tailpipe of its own ambition. Throwing several layers of twists atop each other, the whole thing descends into a TV-movie melodrama of the silly, clichéd, contrary and obvious.

A movie that could have been another Black Swan in horror, psychological thriller and dramatic character study ends up borrowing, no, stealing wholesale, from Fight Club and Ghost in a patchwork plot that finishes as Shutter Island.

The final edit tries to distract the audience from all that with a hackneyed climax of guns, fire, screaming, punch-ups, a touch of American Psycho and a soundtrack that is amped up so loud you just want to shout at the orchestra to keep the noise down!!! No wonder the neighbours got so upset. SC

Sue Corsten is a film and TV make-up artist based in the UK.
View all posts by Sue Corsten »
« Review: Stephen Fry – Gadget Man
Review: Boardwalk Empire Season One »