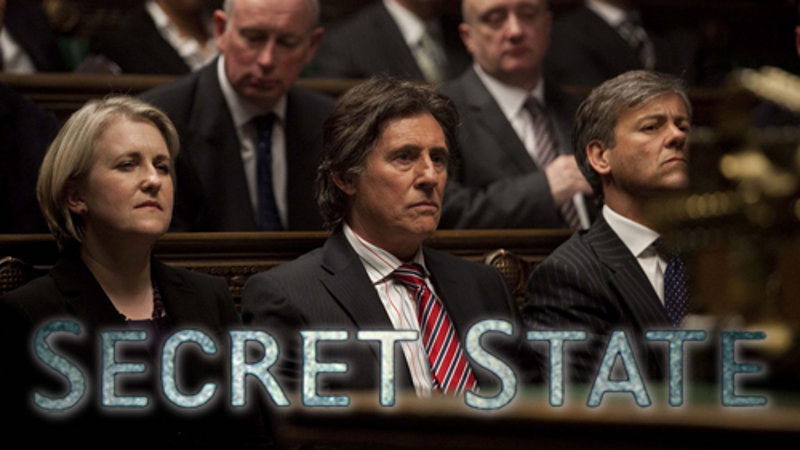 UK terrestrial Channel 4 turns in a superior conspiracy thriller; with all the baggage that comes with the genre.

It’s the second time Labour MP Chris Mullin’s book A Very British Coup (rather a giveaway title for a thriller) has been adapted for TV. This time it is Gabriel Byrne as rebel Prime Minister Tom Deakin, ex-army officer and man of principle fighting the massed ranks of greedy politicians, slimey bankers, slippery oilmen and rogue intelligence chiefs.

Beginning with Byrne’s horrified face at the site of an industrial accident and his discovery of a child’s hand still in its’ mitten, we get the assassination of a Prime Minister, UAV drones, terrorism and corporate bad behaviour in an Orwellian nightmare version of Surveillance Britain.
A fine supporting cast includes the best of British; Nicholas Farrell, Lia Williams, Sylvestra Le Touzel, Gina McKee, Anton Lesser, Stephen Dillance, Charles Dance, our mate Rupert Graves and Douglas Hodge as an embittered retired MI5 drunk, Deakins personal friend from his army days.

Byrne has an uneven film and TV CV: highlights being Millers Crossing and In Therapy, lowlights in End of Days and Siesta. Here, he pulls off the difficult trick playing a politician you actually root for, a radical with an obligatory dark past.

In an attempt to update the core of Mullins’ book, Channel 4 throws the kitchen sink into the thriller mix; bad bankers, bad corporations, warring intelligence agencies, whistle-blowers, party-political skullduggery plus the unseen bad guys, the Iranians. Last outing (1988), PM Harry Perkins went to the Soviet Central bank to blow off the IMF and bail out the UK; this time it’s India.

Despite the restrained performances and intelligent script, this drone-fuelled try-hard jumps around between Significant Glances. It’s no State of Play or Edge of Darkness (both British TV originals). It’s not even the smokily atmospheric time-capsule of Granada’s A Very British Coup.

As with all political thrillers, Secret State disappears up its own tail-pipe as the many plot strands crash together over the roughly 160-minute running time. The dialog gets hokey in places, with RADA’s finest shouting their carefully rationed expletives at key moments.

Also, it’s not as expensive as the noir production suggests. Deakin’s 10 Downing Street appears to have a staff of about three people and only one PR person running the entire government press machine. This is clearly TV fantasy land.

If you can swallow the clichés, certain scenes positively crackle with tension, Byrne is at his best making firebrand speeches in the House (with or without his native Irish accent) and you get exactly what you expect without the excesses of 24 or Hunted. RC

Robin Catling gained degrees in both arts and technology which led to a diverse portfolio of employment. A freelance systems analyst, project manager and business change manager for the likes of American Express, British Airways and IBM, he moved on to web design, journalism and technical authoring. He has also worked in film and television, both behind and in front of the camera, including productions by Steven Spielberg, Martin Scorcese, Ron Howard and Ridley Scott. A qualified three-weapon coach, he runs West Devon Swords teaching sports fencing to all age groups, and in recent years qualified with the British Federation of Historical Swordplay to teach medieval and renaissance combat in the Historical Western Martial Arts.
View all posts by Robin Catling »
« How-to: The ‘Elevator Speech’
Review: The Hobbit: An Unexpected Journey (2012) »