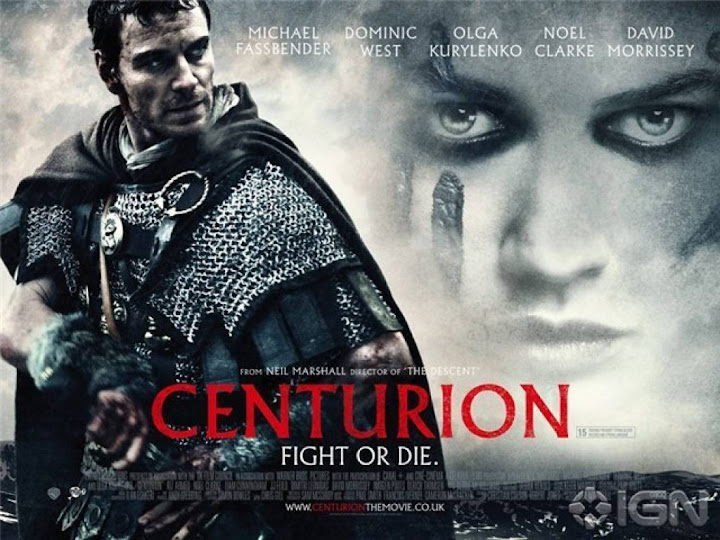 This is Platoon in togas, set in a time when men are real men and don’t die of exposure up Scottish mountains; where no impaling, throat-cutting, beheading or amputation can’t be improved by extra CGI blood or actual claret – preferably with extra gurgling, slicing noises.

Michael Fassbender (Prometheus, 300, Hunger) as centurion Quintus Dias, narrates his way through the mother of all chase movies that is either epic or monotonous, depending on whether you find endless helicopter shots of rugged Scottish landscapes thrilling.

If you saw The Eagle, you’ll know the tale of the mysterious disappearance of the Ninth Legion. Well, this is it. Except, as Marshall himself discovered in the research, it didn’t happen. But when the legend is better than the truth, print the legend (as they say in The Man Who Shot Liberty Valance).

So Marshall goes for legendary. All 3,000 of the legion are burnt, shot, impaled, beheaded or sliced in every possible gory way, until Fassbender has only six men left to rescue their captured general (The Wire’s Dominic West in full-on Brian Blessed “Gordon’s alive!” performance). Except they don’t.

Those ‘orrible blue-painted Picts put the general in chains that our heroes can’t break. So, having trekked for days behind enemy lines to get him, they have to escape even further to get home, pursued by vengeful harpy Olga Kurylenko (Quantum of Solace).

Under the tag line “Scotland: all landscapes, all the time,” Marshall relishes every brutal hack-fest as he whittles down his ragged band of survivors across mountain, river and forest.

There’s a momentary idyll in the forest at the home of blonde Scots enchantress Arianne (Imogen Poots).

No matter how many references Marshall shoehorns in to insurgent guerilla warfare to evoke Iraq and Afghanistan, harping on about “war without honor” and “war without end” this is essentially Boys’ Own Adventure stuff; Guns of Navarone with a chunk of Bravo Two-Zero.

Sure enough, Fassbender and stalwarts Liam Cunningham, David Morrisey, Noel Clarke and JJ Feild earn their money in wind, snow and frozen rivers, trying to keep the performances real, but the script is straight from the Magnificent Seven stable, with added f- and s- words.

While Marshall is determined to outdo his own previous bloody outings, Fassbender delivers a strangely stilted British army officer out of Sandhurst – no upper lip could be stiffer.

Fun in a hackneyed, World War Two movie style, more The Expendables than Troy, cheaper than The Eagle, but more inventive, Centurion deserves a round of applause if only for bringing back the cast alive from all that Scottish weather. RC

Robin Catling gained degrees in both arts and technology which led to a diverse portfolio of employment. A freelance systems analyst, project manager and business change manager for the likes of American Express, British Airways and IBM, he moved on to web design, journalism and technical authoring. He has also worked in film and television, both behind and in front of the camera, including productions by Steven Spielberg, Martin Scorcese, Ron Howard and Ridley Scott. A qualified three-weapon coach, he runs West Devon Swords teaching sports fencing to all age groups, and in recent years qualified with the British Federation of Historical Swordplay to teach medieval and renaissance combat in the Historical Western Martial Arts.
View all posts by Robin Catling »
« Review: Brighton and Hove Artists Open Houses Christmas 2012 [part 2]
Review: Brighton and Hove Artists – New England House 2012 »