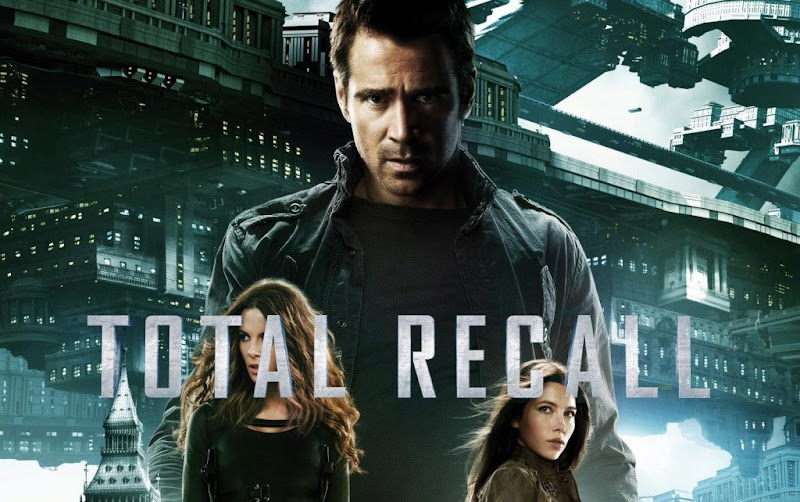 It’s deja vu all over again as Len Wiseman’s grand sci-fi movie mash-up doesn’t even qualify as Total Reboot. It could be worse – you could be sitting through Arnie’s big dumb original again…

Imagine a hideously expensive, hideous cocktail: one part Blade Runner, one part Minority Report, one part I, Robot, one part Philip K.Dick source story We can Remember It For You Wholesale, and three parts Total Recall, 1990. Dilute with some brain-numbing dialogue wiffling on about past present and future. Chug it back for two hours then leave with a sore head.

When factory worker Douglas Quade (Colin Farrell) awakes from a bad dream as a super-spy to a post-apocalyptic future in which he has quite a nice apartment, regular clean production line job and stunning Kate Beckinsale for a wife, the rest of us think, hang on, what have you got to complain about (besides the acid rain and the neon lights)?

But no, he has to go to Rekall, the company that can turn your dreams into real memories. When the procedure goes wrong, Quade gets quite violent, kills a police squad, finds his wife is a police assassin, and goes on the run.

This Total Recall is entirely Earth-bound, where the Colony (Australia) is controlled by the fascist United Federation of Britain (don’t laugh, it’s run by the Americans), controlled by Chancellor Cohaagen (Breaking Bad’s Bryan Cranston – I said don’t laugh). Quaid’s dream-girl is rebel fighter Melena (Jessica Biel) leading him to the head of Resistance (Bill Nighy) to stop a full military takeover.

This is the biggest chase movie since Minority Report and MI-2, but sadly, as a mega-bucks Hollywood actioner, there is only one route the plot can take. The rest is all window-dressing; marvellous see-through robots, flying cars, absurdist, surreallist architecture, including levitating buildings, hover-elevators in some kind of wierd 3-D platform game, all in the most lavish CGI money can buy.

The Fall, a giant gravity-elevator through the centre of the Earth is a ridiculous high-tec McGuffin and an excuse for some zero-G camera trickery and a suitable CGI-Mega-Sets (TM) (R) (C) Inc. set-piece finale.

As with a lot of these Event Movies, the action frequently feels like watching someone else playing a really exciting video game; and you’re not allowed a go on it.

And still it makes no more sense than the Arnie original.

We have a decent leading man, but for all Farrell’s talents for looking confused, he can’t wade clear of the soggy multi-layered plotting or dire dialog. Beckinsale and Biel do their best as Ms. Scarlett and Ms. White, with a lot of running, jumping, shooting and punching. Cranston fails to add any depth to the principal villain. And yet again the only black character is a traitor.

While we lose Mars, a snarling Michael Ironside villian, mutants and hokey tunneling machines, Wiseman unwisely allows too many sly references back to the 1990 movie. Whilst robbing Blade Runner blind, we get iconic images of Quade in the Rekall chair, a triple-breasted prostitute, a (robot) arm amputation in the elevator shaft and a playful tilt at the airport disguise scene. Ooh, aren’t we clever!  No.

But some things never change. Neither the robot or human bad guys can hit what they shoot at; the bullets fly freely, there’s death and carnage on a massive scale, yet it’s all curiously bloodless.

And at two hours, about thirty minutes and three chases too long.

I chose to sit back and admire the production design and the relentless pace of chases and punch-ups. It’s all terribly well done but the result is as empty as the 1990 original without the big dollop of over-lit camp buffoonery. Soldier on Colin, there’s another Tigerland or Crazy Heart in you yet. RC