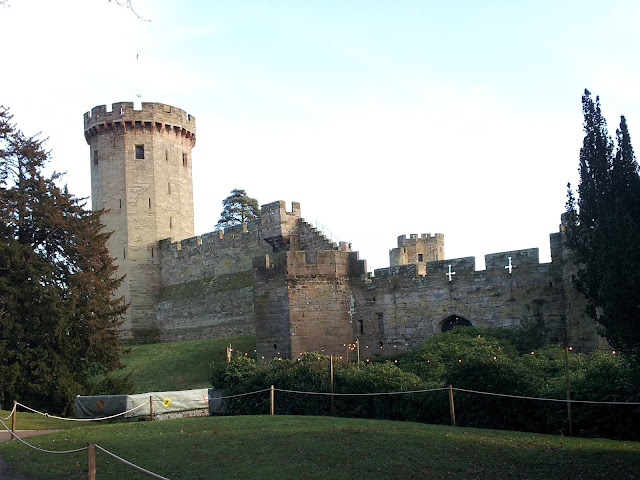 Firstly a warning – in fact, two warnings. The first is that Warwick Castle has been run for the last thirty odd years by the Madam Tussauds parent company, which, as the famous London waxworks museum attests, is expert at extracting the very last tourist penny.

Warwick Castle used to have huge gates and a portcullis. Now it has turnstiles at the entrance. Go in with your eyes open and plenty of cash, you’ll have a whale of a time (not that you’d fit a whale through the castle gate…).

Second, related to the first, is to be aware of what’s in your ticket price and when you buy it. For the hardened tourist, Warwick Castle’s pricing is almost as Byzantine as British railway tickets.

Take a look at http://www.warwick-castle.com/tickets-and-gifts/one-day-ticket-prices.aspx the ticket table and have a handkerchief ready. Basic adult price is £22.80 on the door. This includes tax at 20% but excludes the two current add-on displays, the BBC TV tie-in Merlin Tower exhibit and the Castle Dungeon. Add both, you’re looking at £30.60 for adults, £25.80 for children and a family of 4 ticket is 107.40. 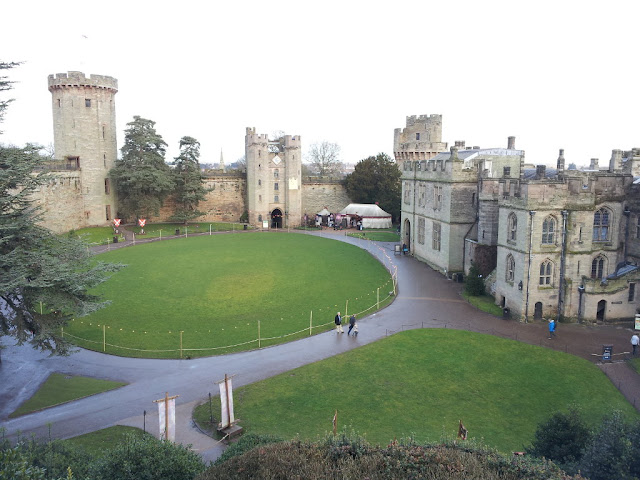 Set against that, the old place does take some up-keep. According to Tussaud’s own figures, they spent £6m on the place this year. Although they don’t say on what. Presumably not the car park which is charged separately at £6 for the day and you don’t find out until you drive up to the gate!

Food and drink are readily available and of decent quality but not cheap. Budget for provisions for the day.

Myself and my young lady picked up a 2-for-1 voucher (in back of a Stratford on Avon promo leaflet as it happened) valid for 2012 which got us in for £11.80 a head. You can find offers through ticket agencies and tourism boards at certain times of year. The Internet and Tourist Information offices are your friend in this.

The Attraction
Bear in mind this ain’t no Euro Disney or Alton Towers. There are no roller coasters, death slides or ghost trains. It’s mostly a faux-historical, child-friendly, Horrible Histories pitch that sits alongside Merlin on the one hand and fashionable Downton Abbey and King’s Speech celeb-name-dropping on the other.

Billed as ‘Britain’s ultimate castle’ – Windsor and Edinburgh might have something to say about that – Warwick Castle saw military service first in the Norman invasion, then the Wars of the Roses, lastly in the English Civil War. By turns castle, prison, derelict, and rebuilt aristocratic stately home, the place is a patchwork of styles and usages.

As a Medieval castle, it is a fine example. The walls and ramparts trail takes you from ground level to the top most tower by way of 530 steep, dark steps, worth the effort but only if you’re fit and able. It’s a one-way route and there’s no lift service.

As a stately home, the upstairs exhibit does a fine tabloid job of early twentieth century name dropping of famous guests. Authentic (if not entirely original) decor and props surround a number of impressive Tussaud’s waxwork effigies – from Churchill to Edward VII.

The downstairs exhibit mixes up Tudor through to Georgian interiors, enlivened by likenesses of Henry VIII and a full set of wives (Warwick belonged to the king, he never visited).

The Great Hall is a gem for history buffs, being filled with a great collection of weapons and armour (mostly original). I also enjoyed the Kingmaker exhibit in the lower ground floor; more tableaux with wax figures in well executed stage sets.

My scholarly young lady was most disappointed with this and the general history-lite approach. ‘Ordinary’ folk, including little people are less likely to mind, particularly if they are running around in helmets with wooden swords purchased from any of the three gift shops.

Also be aware some events and displays are seasonal. On the island in the River Avon is a working trebuchet (catapult) which is demonstrated in summer. There is also re-enactment of Medieval jousting, not on when we visited so I can’t answer for the quality of the show.

What we did enjoy was the falconry display (Harris hawk and falcon), and the ‘meet the birds’ aviary, housing magnificent specimens including bald eagle, buzzard and the biggest owl I’ve ever seen.

There are several guided tours during the day on a variety of aspects of the castle, each of about twenty minutes; the guides are young, knowledgeable, good presenters and pack a lot into their allotted time. Topics vary so you will get a mixed programme on the day you visit. Currently billed are Christmas at the Castle, The Ultimate Castle Tour, Flight of the Eagles Show and Ghosts of Warwick Castle. We went on four completely different tours including one on historical armour.

Go on a dry summer’s day (assuming you can find one in the English Midlands) and there is more than enough going on to fill it. Friends of mine recommending the place maintain there’s more to do than fits in a day and they could be right. Go in, check the events list, consult the map and make a plan. RC

Robin Catling gained degrees in both arts and technology which led to a diverse portfolio of employment. A freelance systems analyst, project manager and business change manager for the likes of American Express, British Airways and IBM, he moved on to web design, journalism and technical authoring. He has also worked in film and television, both behind and in front of the camera, including productions by Steven Spielberg, Martin Scorcese, Ron Howard and Ridley Scott. A qualified three-weapon coach, he runs West Devon Swords teaching sports fencing to all age groups, and in recent years qualified with the British Federation of Historical Swordplay to teach medieval and renaissance combat in the Historical Western Martial Arts.
View all posts by Robin Catling »
« Humour: No room at the Inn
Review: Samantha Jade »