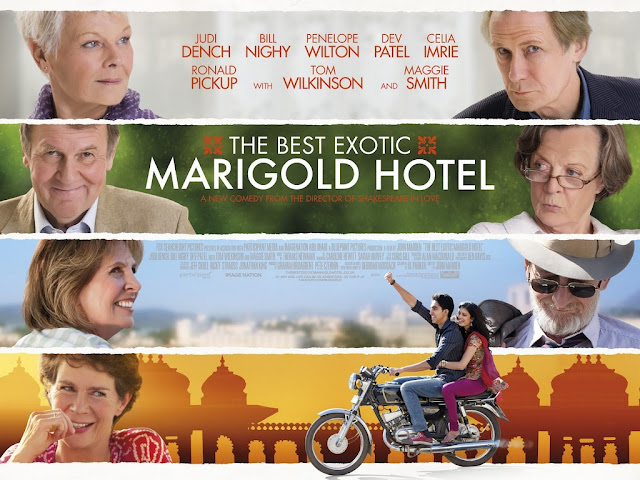 Following a group of British retirees who decide to “outsource” their retirement to less expensive and seemingly exotic India, the newly ‘restored’ Best Exotic Marigold Hotel turns out to be less than advertised.

The crumbling edifice is overseen by the hopeless optimist and even more hopeless manager, Sunny Kapur (Slumdog Millionaire‘s Dev Patel), and India is shabby, vibrant, growing and chaotic in equal measure.

Their dreams of a life of leisure in a reborn Raj broken, the ex-pats – Maggie Smith, Judi Dench, Ronald Pickup, Celia Imrie, Bill Nighy, Penelope Wilton and Tom Wilkinson, have to reassess their lives and find what it is they really want from their declining years.

BEMH plays like a latter-day Ealing comedy, with a first rate cast, a sparkling script and some excellent lines. There are a few surprise turns along the way, although the end point of the feel-good script is exactly where you expect it. Relationships and characters turn around fairly predictably in the last act. And so they should.

Playing in the shadow of E.M. Forster and Merchant-Ivory productions, BEMH is never quite the revisionist portrait of India it wants to be. It plays to many stereotypes of India and, despite the contrast with modern office blocks and call centres, fails to overturn most of them. The truth is the movie needs them to turn in the attractive post-card back-drop of India to bring in the dollars (or should that be ruppees?). The clichés of the arranged marriage and the iron-willed Mummagee may be an India too far for some.

In the hands of this cast, it is forgiveable, as you are caught up in the stories of these twilight travellers. It’s almost impossible to single out any of their very different, but equally engaging performances. Rarely do you get an ensemble cast of this much depth and talent.

We don’t do star ratings; well, we do now. Five. RC

Robin Catling gained degrees in both arts and technology which led to a diverse portfolio of employment. A freelance systems analyst, project manager and business change manager for the likes of American Express, British Airways and IBM, he moved on to web design, journalism and technical authoring. He has also worked in film and television, both behind and in front of the camera, including productions by Steven Spielberg, Martin Scorcese, Ron Howard and Ridley Scott. A qualified three-weapon coach, he runs West Devon Swords teaching sports fencing to all age groups, and in recent years qualified with the British Federation of Historical Swordplay to teach medieval and renaissance combat in the Historical Western Martial Arts.
View all posts by Robin Catling »
« Happy New Year 2013
Humour: Man Flu Scourge of the Y Chromosome »