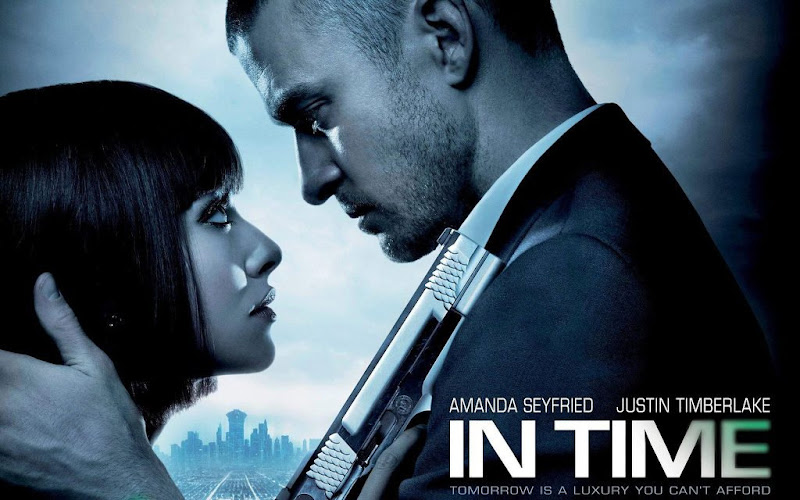 In a near-future where disappointingly little has changed except the most laughably abhorrent and ludicrous genetic engineering, Justin Timberlake and Amanda Seyfried go on the run, get chased and try to smash the system of buying immortality. In this post-2008 financial crash thriller, the bankers and the rich are the villains.

I love a high-concept sci-fi movie, but… we’re less than a century into the future and clearly religion, ethics, politics and morality have either disappeared or got selective amnesia. No matter how hard it tries as a thriller, In Time just can’t get past the bonkers sci-fi set-up.

In Time must have been some pitch meeting for writer/director genius Andrew Niccol (Gattaca): “We’ll steal wholesale from Logan’s Run, Gattaca, Bonnie and Clyde, The Adjustment Bureau, and Inception (we’ll even get Killian Murphy). We’ll fill it with young, pretty people, throw in a couple of car chases, some shooting, a British gangland villain to meet the quota – and running. Lots of running.”

Tell you what, go see any of those movies instead of this glib, irresponsible PG-13 tosh.

In this future, you mature at 25 and stop ageing. Which would mean immortality, except time is now a currency and the day-glo clock on your arm counts down to zero when your body shuts down and you die. Unless you can earn time to go on living. It’s an uber-capitalist economy where you literally bank time.

In Time inhabits a funny old world. The genetic engineering doesn’t fit, doesn’t work, you get too long to think about it and realise all of the central technical conceits are daft ideas. Timberlake supposedly lives in a surveillance society, but only as long as it serves the plot. Nobody looks 25, and even the underclass have good teeth. There’s a guaranteed fatal car crash yet Timberlake and Seyfried walk away barely scratched (well, it was a scale-model shot). There’s some sub-cop-show shoot-outs and roof-top chases, a bit of gratuitous violence, swearing and skinny dipping.  Worst of all, the thing I can’t get past is Amanda Seyfried’s ridiculous wig.

The world of In Time is oddly muted. I don’t mean the muted wardrobe, or moody lighting of deserted night-time streets – all that is wiped out by the bright sunlit day shots in deserted urban streets, LA canals and bridges. With no traffic. So much for an overpopulated future. No, the people are muted. Nobody reacts they way they should. This is a very suppressed, alienated, disconnected world; it’s not a new way to paint a dystopia (see 1984, Equilibrium, THX1138), but unlike Niccol’s superb Gattaca, doesn’t engage.

Timberlake and Seyfried are supposed to smoulder with righteous anger and indignation, but mostly look bored or too-cool-for-school. The two leads hold the screen but lack depth. The torrent of clichés they have to swim through (literally in one scene) gets tedious. Even Murphy flounders as the dedicated black-clad Dirty Harry cop. I really didn’t care about any of them.

Net result: a true pudding of borrowed ideas that might have made a good Outer Limits or Twilight Zone episode, but as a two hour movie, it’s just tiresome. So tiresome, it doesn’t even make for a decent review. RC

Robin Catling gained degrees in both arts and technology which led to a diverse portfolio of employment. A freelance systems analyst, project manager and business change manager for the likes of American Express, British Airways and IBM, he moved on to web design, journalism and technical authoring. He has also worked in film and television, both behind and in front of the camera, including productions by Steven Spielberg, Martin Scorcese, Ron Howard and Ridley Scott. A qualified three-weapon coach, he runs West Devon Swords teaching sports fencing to all age groups, and in recent years qualified with the British Federation of Historical Swordplay to teach medieval and renaissance combat in the Historical Western Martial Arts.
View all posts by Robin Catling »
« Review: The Thick of It – The Inquiry
Review: Sherlock Season 2 DVD »