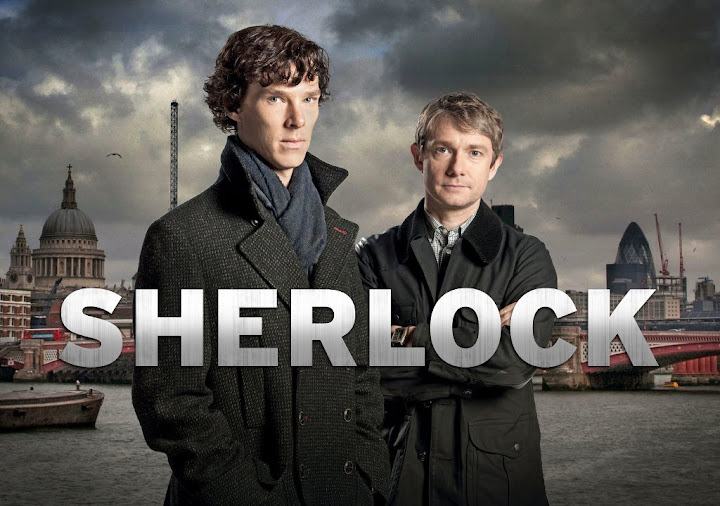 The best show on DVD? It’s an easy deduction to make.

Gone are the Victorian trappings: Sherlock is a modern ‘consulting’ detective, meaning he has a free pass onto crime scenes when the police are out of their depth. Highly intelligent, his sharp thought processes are visualised by computer keys flashing on screen, with computerised beeps reflecting his cognitive speed. His mind scrolls urgently through deductions, like pictures spinning on a game machine.

John Watson is an ex-soldier and army doctor, returned from Afghanistan, in need of a flatmate and a distraction from the post-traumatic stress of war. Mrs Hudson is their loyal, tolerant landlady.

Benedict Cumberbatch is, of course, excellent as Sherlock. His deep voice resonates with authority. His emotionless high-speed deductions convey Sherlock’s dismissive arrogance and lightning intelligence in a heartbeat. His Sherlock is still human enough to be likeable.

To suit our modern obsession, the writers address the long-standing mystery of Sherlock’s sexuality without solving it. We’re left to assume that Sherlock has the sociopathic gene to safeguard him from emotional lapses. Thanks to this, sentiment never thwarts his reasoning powers. John, on the other hand, is a good friend, and enough of a lady’s man to convince us he’s straight.

As John, Martin Freeman is the unsung hero. His skill as an actor is easy to overlook when unique characters such as Sherlock take centre stage. Freeman’s perfect comic timing and expressions highlight Sherlock’s oddities and restore the balance when his friend’s behaviour switches between sub- and super-human.

Sherlock’s high-powered brother Mycroft is played with smarmy superiority by Gatiss, and while the bitter puerile arguments between Sherlock and Mycroft seem catty, they nonetheless add backstory to Sherlock, stressing his social ineptitude.

The series’ only weakness is Moriarty. Recent TV villains (including Keith Allen’s Sheriff of Nottingham) have sparked a trend for loony sadists and the Sherlock team has jumped on the bandwagon. What better nemesis for Sherlock than a hyperintelligent criminal who fights the tedium of everyday life by devising labyrinthine problems for Sherlock to solve? On the face of it, Andrew Scott is ideal for the part. He’s pretty daunting as a Shakespearean villain. As Moriarty he doesn’t quite pull it off. The lunacy here is less sinister than weird. Is this miscasting or weak writing?

Appropriately, series two leaves us with a puzzle. How did Sherlock stay alive in the final episode? Could the hallucinogenic drug in the Baskerville episode have been a plot seed? Did the cyclist, who crashes into John at the end, inject him with the drug so that John saw what he expected to see? The answer is bound to be elementary. VP