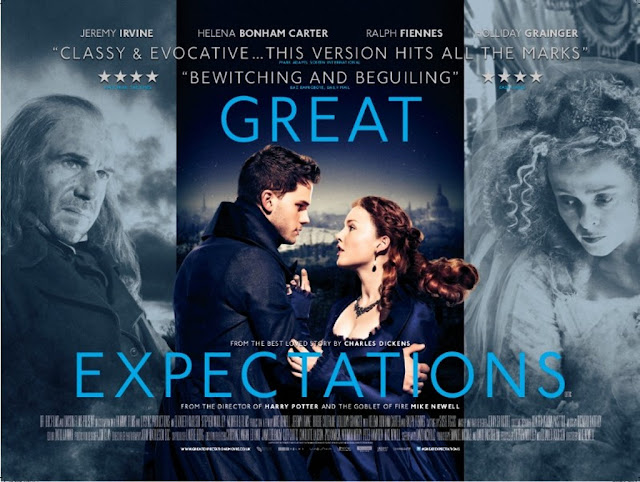 Dickens’ perennial favourite about the blacksmith’s boy made a gentleman gets another treatment by British Director Mike Newell. But can it beat the John Mills/David Lean classic and all its other predecessors?

Including, it has to be said, the dark BBC 2011 TV version with the prettiest Pip and the most bonkers Miss Havisham?

Expect this one to replay on TV every Christmas and Easter from now on.

Dickens didn’t write short books and this, arguably his masterpiece, has a lot in it. Harry Potter director Newell and screenwriter David Nicholls do a fine job of compressing the essence of Great Expectations into a solid 129 minutes.

Some have complained its still too long, others have called it leisurely. I thought it a satisfying length that didn’t drag.

It’s a handsome film, even when showing Victorian England at its most squalid. Recurring visual themes tie into the narrative and dialogue, and the necessary CGI landscapes and set-pieces never intrude.

It’s not without its faults, however.

Ever the rags-to-riches contrast in mind, sacrificing a few sub-plots and characters and losing much of the comic relief (Ewan Bremner’s Wemmick and Olly Alexander’s Herbert Pocket get downgraded), Newell keeps the main plot running on rails.

But that demands three rather blunt ‘Basil Exposition’ scenes in flashback to fill in the backstory; difficult to handle, given that’s how Dickens wrote, but it feels clipped, mechanical and not very cinematic. In fact, this is not a subtle retelling at all. When one character dies, the light literally goes out on their face.

The two leads, Jeremy Irvine (Warhorse) and Holliday Grainger (Bel Ami, The Borgias) are admirable as the older Pip and Estella. Irvine is going to be a fine actor when he hits his prime.

In support, Jason Flemyng is his best in years as Joe Gargery, Sally Hawkins a perfect shrew as Mrs Joe; Jessie Cave gets a big ‘aah’ as Biddy, but (Eastenders) Tamzin Outhwaite’s Molly barely gets a look in.

Headliners in the Harry Potter reunion cast (Bonham Carter, Coltrane, Fiennes) have plenty of material to work with. Coltrane’s hardened lawyer Jaggers doesn’t earn the same sympathy as David Suchet on TV, despite being rather central to the plot.

Bonham Carter brings out her usual, slightly irritating box of tricks for the first half, but produces real depth and pathos for Miss Havisham’s final repentance and demise. Crucially, she’s not full-on bonkers, wherein Gillian Anderson bravely failed in 2011.

Ralph Fiennes is utterly compelling as Magwitch. Something special happens whenever he is on. The definitive Magwitch? The definitive Great Expectations? Perhaps not, but very, very good. RC

Robin Catling gained degrees in both arts and technology which led to a diverse portfolio of employment. A freelance systems analyst, project manager and business change manager for the likes of American Express, British Airways and IBM, he moved on to web design, journalism and technical authoring. He has also worked in film and television, both behind and in front of the camera, including productions by Steven Spielberg, Martin Scorcese, Ron Howard and Ridley Scott. A qualified three-weapon coach, he runs West Devon Swords teaching sports fencing to all age groups, and in recent years qualified with the British Federation of Historical Swordplay to teach medieval and renaissance combat in the Historical Western Martial Arts.
View all posts by Robin Catling »
« Review: The Somnambulist – Essie Fox
Review: The Apple – Michel Faber »