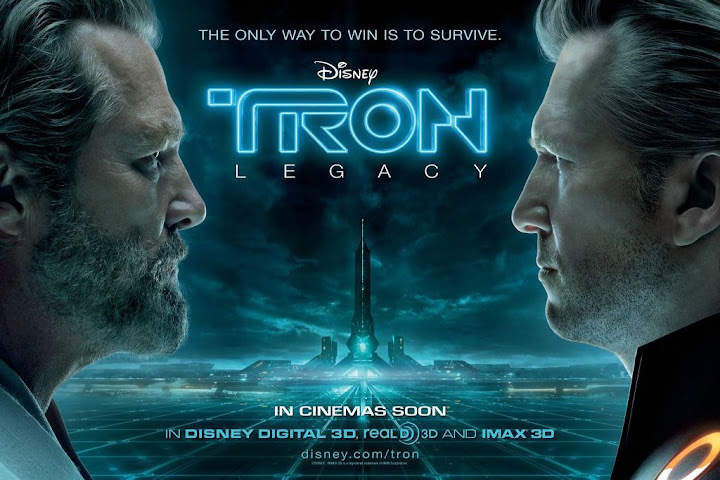 Perpetual adolescent Sam Flynn steps into his father’s shoes, fighting for freedom in the virtual reality world of Tron. It’s a sequel to Disney’s 1982 computer-game fantasy. With extra neon.

Of course, as a Disney fantasy, any resemblance to actual computers, software, AI or indeed anything scientific is a momentary lapse in script-writing. Mostly it’s about unfeasibly fit people in spandex, neon and  reflective helmets doing gymnastic martial arts in a two-hour pixel-fest cranked up to eleven. Joining the classic light-bikes, flying aircraft carriers, and gladiatorial games in a floating glass arena, are light-planes in full-on WWII dog-fights.

In the 80’s, Jeff Bridges as Kevin Flynn and Bruce Boxleitner as Tron fought the fascist Master Control program (a classic David Warner villain). This time, Bridges’ strangely disturbing, motion-captured avatar of his younger self is Clue, a program designed to create a perfect system out of an imperfect world. The resulting conflict in programming leads to violent suppression, genocide, and the threat of Clue’s software army invading our real world.

Tron Legacy exists in a stunningly imagined, designed and realised digital world, following directly from the original, and fuelled by Star Wars, The Matrix, Gladiator and any number of other movies. It’s far from original, but carries off the action in superb style. A direct successor to Tron, Legacy does at least try to be grown up about things.

Jeff Bridges is the centre of gravity, as both Flynn Senior and his avatar Clue, completely overshadowing Garrett Hedlund as nominal lead Sam Flynn, who is exceptionally bland. Olivia Wilde is Trinity-lite as kick-ass chick in leather pants and love interest Quorra.

There are some misjudgements in the script. The first is giving Bridges and Clue too much pretentious cod-philosophy about creation and freedom and freewill.

The second is a big clunker of a sequence mid-way. Now, we love Michael Sheen; his laugh in the final Twilight movie was the movie moment of the year. But in Tron Legacy, he’s channeling the most camp, outrageous version of David Bowie crossed with Freddie Mercury and the MC from Cabaret. Sheen is in a different movie and either nobody told him or he was given no direction. It’s embarrassing.

Despite a lot of standard Disney guff about family, fathers and sons, loyalty and betrayal, Tron Legacy is all about the action, with some fantastically detailed de-res’ings, as characters bite the dust in showers of bloodless pixellated crystal shards. You also get to fly through some lovingly rendered skies and landscapes.

It is what it is and if you have nostalgia for the original, switch off brain, engage your inner geek, enjoy. RC

Robin Catling gained degrees in both arts and technology which led to a diverse portfolio of employment. A freelance systems analyst, project manager and business change manager for the likes of American Express, British Airways and IBM, he moved on to web design, journalism and technical authoring. He has also worked in film and television, both behind and in front of the camera, including productions by Steven Spielberg, Martin Scorcese, Ron Howard and Ridley Scott. A qualified three-weapon coach, he runs West Devon Swords teaching sports fencing to all age groups, and in recent years qualified with the British Federation of Historical Swordplay to teach medieval and renaissance combat in the Historical Western Martial Arts.
View all posts by Robin Catling »
« What’s in a name? [Re-post]
How-to: Prevent Windows Blue Screen Restarts »