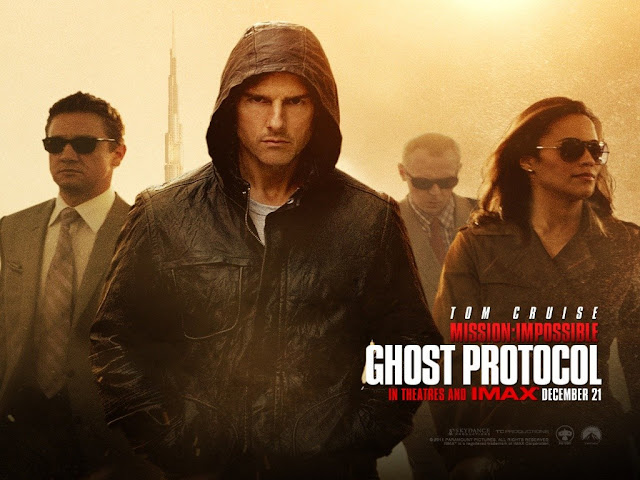 The Tom Cruise Show returns to an established spy franchise with plenty of crash-bang-wallop, thanks to J.J. Abrams and director Brad Byrd. This time it really is Mission Impossible; prevent World War III after the Kremlin is bombed.

The madness of the movie franchise arms race is matched only by the resurrection of the Cold War.

Amongst some inventive set-pieces, Jeremy Renner rehearses his Bourne Legacy. But nobody wears a mask; the character baggage and Swedish villain (Michel Nyqvist) fail to convince; and isn’t Simon Pegg in the wrong movie…?

In a movie that’s as pompous and overblown as its pseudo-jargon title, Cruise and the IM Force are discredited, outlawed, disavowed and on the run. Again.

This time they’ve been conveniently framed for the Kremlin explosion, the villain has made off with the Nuclear Codes, the Russians and Americans are after them, the Indians are on the take and no travelogue cliche is left out of the suitcase as the International action moves from Russia to Dubai to India.

It’s awash with gadgets, techno-babble, running, shooting, fighting, stunt driving, free-climbing and tense radio chatter. There’s also an over-reliance on computer-hackery of all descriptions, with technology that bears as much resemblance to the real world as my left foot does to Marilyn Monroe. Most of it belongs in The Avengers.

Joining the white-boys club of the IMF (hold on, isn’t that an international bank?) Paula Patton is on hand to check the quota boxes for female, black and eye-candy.

Not that it matters who’s in it; Cruise, Renner and Paula Patton act out their characters’ emotional baggage in the mistaken belief that anyone is listening or cares. This is an MI-spy movie. Just chase somebody, jump off something, dangle off a wire – or jump down a ventilation shaft onto an electro magnet – nobody cares about the plot. Nyqvist (Dragon Tattoo trilogy) is completely wasted as the principal villain – a mathematician, statistician and game-theorist so absorbed by nuclear Armageddon that he decides to start one. He’s written off as a nut-job with one line and that’s it.

But this is an MI movie. It is what it is: big, expensive, loud, frenetic and utterly ludicrous. And too long. You don’t want that? Don’t see it. I wish I hadn’t. RC

Robin Catling gained degrees in both arts and technology which led to a diverse portfolio of employment. A freelance systems analyst, project manager and business change manager for the likes of American Express, British Airways and IBM, he moved on to web design, journalism and technical authoring. He has also worked in film and television, both behind and in front of the camera, including productions by Steven Spielberg, Martin Scorcese, Ron Howard and Ridley Scott. A qualified three-weapon coach, he runs West Devon Swords teaching sports fencing to all age groups, and in recent years qualified with the British Federation of Historical Swordplay to teach medieval and renaissance combat in the Historical Western Martial Arts.
View all posts by Robin Catling »
« How-to: Trouble-shoot Windows Crashes – Software
How-to: Recover data from a damaged docx xlsx or pptx document »