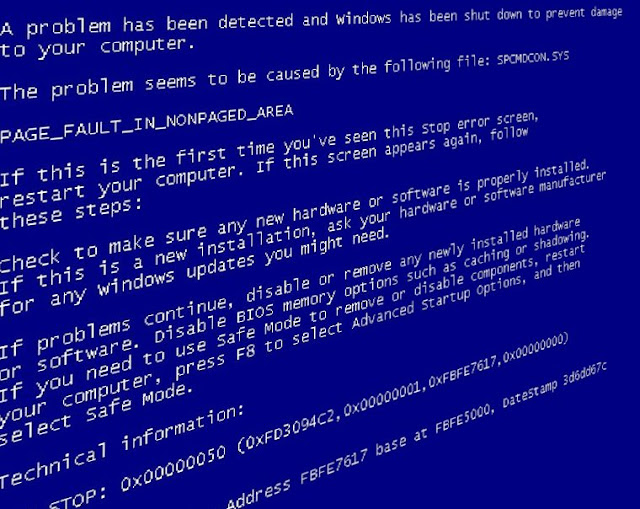 Windows is crashing. You’re looking at regular “program is not responding messages” or worse – a Blue Screen of Death. So you’ve worked through the software diagnosis outlined in part one and so far found nothing.

Perhaps it’s in the hardware; somewhere a fault has developed that’s stopping things working that worked before? Or have you just added a new piece of kit that’s made things unstable? You’ve checked the software drivers for the hardware, that doesn’t look like it. Time to check your hardware.

Bad Memory Or Motherboard
Memory and motherboards do not last forever. Components can fail. Manufacturing faults creep in at the nano-metre engineering tolerances used. Mean-time Between Failure measures increase, but you may get unlucky. Most of those Blue Screen Of Death (BSOD) crashes occur because of a memory or motherboard issue. You will often see a Fatal Exceptio_n Error, which means data that should be stored in memory could not be retrieved.

You can test memory with a utility like Memtest86 or, in some cases, a built-in motherboard diagnostic tool (see the motherboard’s manual). Thanks to heating an cooling cycles inside your machine, it may not be spotted cold. Try to test after an exception occurs.

BIOS Settings
Basic Input Output Settings. New generations of machines are appearing without traditional BIOS setup programs. For the rest of us, most motherboards still come from the factory with settings that are safely compatible. If you or the PC maker change those BIOS settings, be prepared to find the best balance between compatibility, performance and reliability. Clock-speed settings, RAM types and latency can be altered for gain, but at the risk of introducing timing faults, overheating and general compatibility issues.

If your CMOS battery goes flat, you will lose all your custom settings and find the factory defaults far from compatibile. Even the boot order of devices can change, giving you a partial or non-booting PC. Expect a Homer Simpson moment if you leave a non-booting USB stick in a machine that defaults to first boot from USB in the boot order. I had one two weeks ago. Nobody saw.

Boot failures for BIOS settings are often accompanied by a series of beeps from the machine, which you can decode to a specific reason using the motherboard manual.

Hard Drive Problems
The most frequent cause of boot failures. A sudden failure to find the boot drive or the boot sector containing the boot loader – check the BIOS is properly configured – then a hard drive has probably gone bad.It may be temporary and fixable with a disk utility, or it may be a sign of permanent failure – stick it into a caddy, plug it in and read your data off it pronto. Then try to fix it. Hard drive issues are also often behind crashes that occur only when opening a specific file.

Windows is keen to run the chkdsk utility at the first sign of trouble. Let it. After that, there are plenty of free hard drive testers and repair programs (Paragon Disk Manager and other versions come to mind). A bad report of many bad sectors, unmovable and un-repairable, means your drive is on the way out. Disk is cheap. Don’t risk it; replace.

Hardware Conflicts
Windows XP and earlier was great fun (/sarcasm) when dealing with hardware interrupt settings, which you often had to set yourself using the BIOS, a config program, driver settings in Control Panel or any combination of the three. Windows can still crash if itreceives conflicting information from different pieces of hardware. While it’s rarely harmful, but it’s a common cause of lockup’s and BSODs.

Hardware conflicts generally show up in the Device Manager, highlighted by the exclamation triangle next to the device. Take a look at the device properties (right-click menu) for that hardware. If there’s a setting for it, you can experiment. You may also have a utility for managing the settings from the device provider – check you menus for tools installed with the drivers and applications that came with it.

These types of conflicts are likely to have been found and solved (or not) by other users – again, a web search on the problem, being as specific as you can, will turn up answers.

Power Issues
A dirty, spiking, low-voltage electricity supply will cause crashes, particularly a random reboot or a BSOD, even on hardware you’ve verified as good. It may be the power supply in the PC (or the power block for laptops). There’s little you can do but replace it.

Problems with the electricity at home or the office – particularly an overloaded circuit, poor wiring or a faulty power strip could be the culprit. Try moving the PC to another socket or another room to see if the crashes stop. Have you a washing machine, tumble drier, dish-washer, power shower or other heavy drain on the same circuit in the building? It is seldom co-incidence. If in doubt, get a qualified electrician to check over the mains supply. Power failures can do lasting damage to equipment. Don’t risk it. Or by an Uninterruptible Power Supply (UPS).

Overheating
Computer components are sensitive to heat and over-heating can cause permanent damage. Most machines will shut down before the red-zone is reached and a crash error may result. Boot failures for heat causes are often accompanied by a series of beeps from the machine, which you can decode to a specific reason using the motherboard manual.

Overheating can have several causes; inadequate case ventilation, a faulty fan or a heatsink that has loosened with repeated power-on-off cycles. The thermal paste that glues the heatsink to the processor can dry out, lose it’s thermal properties or warp and loose contact between the two surfaces. Laptops can overheat simply because they’re placed on the wrong surface, or the tiny vents on the side are blocked or covered. I even had a 2.5in hard drive that would overheat all on its own.

ConclusionHopefully these two articles give you some idea where to begin diagnosing cracshes and Blue Screens. Don’t assume Windows 8 will be any better than its’ predecessors; until we move to an entirely new set of hardware and software architectures, these old problems will remain – rarer, but still tricky to resolve. Now, anyone know why my Android phone locks up…? AJS