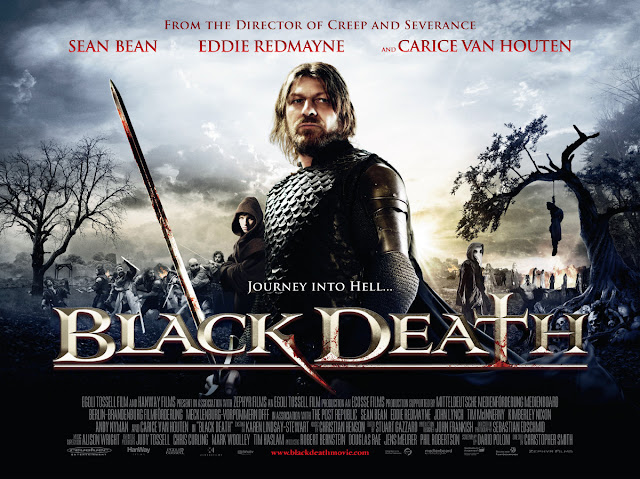 Another slice of Medieval misery to rival Ironclad, Season of the Witch and Ken Follett’s Pillars of the Earth / At Worlds End – this time with added Wicker Man! If you can take a thick slice of Dark Ages torture-porn, read on.

1348: the Black Death plague sweeps a superstitious and witch-craft-obsessed Europe. Novice monk Osmond (Eddie Redmayne) is recruited as guide by Inquisitor Ulrich (Sean Bean) as guide to take his cut-throat band to a village said to be controlled by a powerful necromancer. Osmond has already broken his vows and goes in search of his lover Averill who has fled the pestilence.

In a grim Medieval quest of mud, blood and splattery violence to rival Centurion and Valhalla Rising, the one thing you can guarantee is no happy ending…

Our Sean Bean doesn’t exactly have a spotless record, leading a number of cinema turkeys or else turning in pantomime villains for Hollywood. Game of Thrones redeemed him somewhat, but I began Black Death with trepidation.

If you can stomach the Medieval misery, it’s actually a decent reflection of the religious obsession, fear, paranoia, superstition, and barbaric violence of the period. Few outside academia realise what a world away we are from such times. Unfortunately it takes some liberties, throwing in plot elements from all these other movies and history from 1340’s to 1640’s, just to make a decent story arc.

There is a strong thriller element – does witchcraft exist or not? The characters are strong, if stock. Radmayne (My week with Marilyn) does his usual sad-eyed, sour-faced, ginger-on-the-brink of tears routine (trademark Eddie Redmayne, every bloody thing he’s in), Bean is the hard-bitten tough guy, and John Lynch gets to croon the Irish narration as the war-veteran sergeant ahead of a coarse band of mercenaries.

Carice Van Houten (From Time to Time) and oily Tim McInnerny are the suspected witch and necromancer.

Black Death drags on a bit, but is mercifully pacey compared to Valhalla Rising, far less silly than Season of the Witch, befre it turns into Hammer’s Witchfinder General.

All religions take a thumping, Christians and pagans are equally barbaric, good guys don’t exist and the best you can expect is a nasty, violent, bloody end. Still, mustn’t grumble. Turn over to Teletubbies, you’ll feel better in a bit. RC

Robin Catling gained degrees in both arts and technology which led to a diverse portfolio of employment. A freelance systems analyst, project manager and business change manager for the likes of American Express, British Airways and IBM, he moved on to web design, journalism and technical authoring. He has also worked in film and television, both behind and in front of the camera, including productions by Steven Spielberg, Martin Scorcese, Ron Howard and Ridley Scott. A qualified three-weapon coach, he runs West Devon Swords teaching sports fencing to all age groups, and in recent years qualified with the British Federation of Historical Swordplay to teach medieval and renaissance combat in the Historical Western Martial Arts.
View all posts by Robin Catling »
« How-to: Safely Clean Your Tablet or Smart-phone’s Touch-screen
Full Circle Side-Pod Episode 13: That’s How it Feels To Be Wrong »