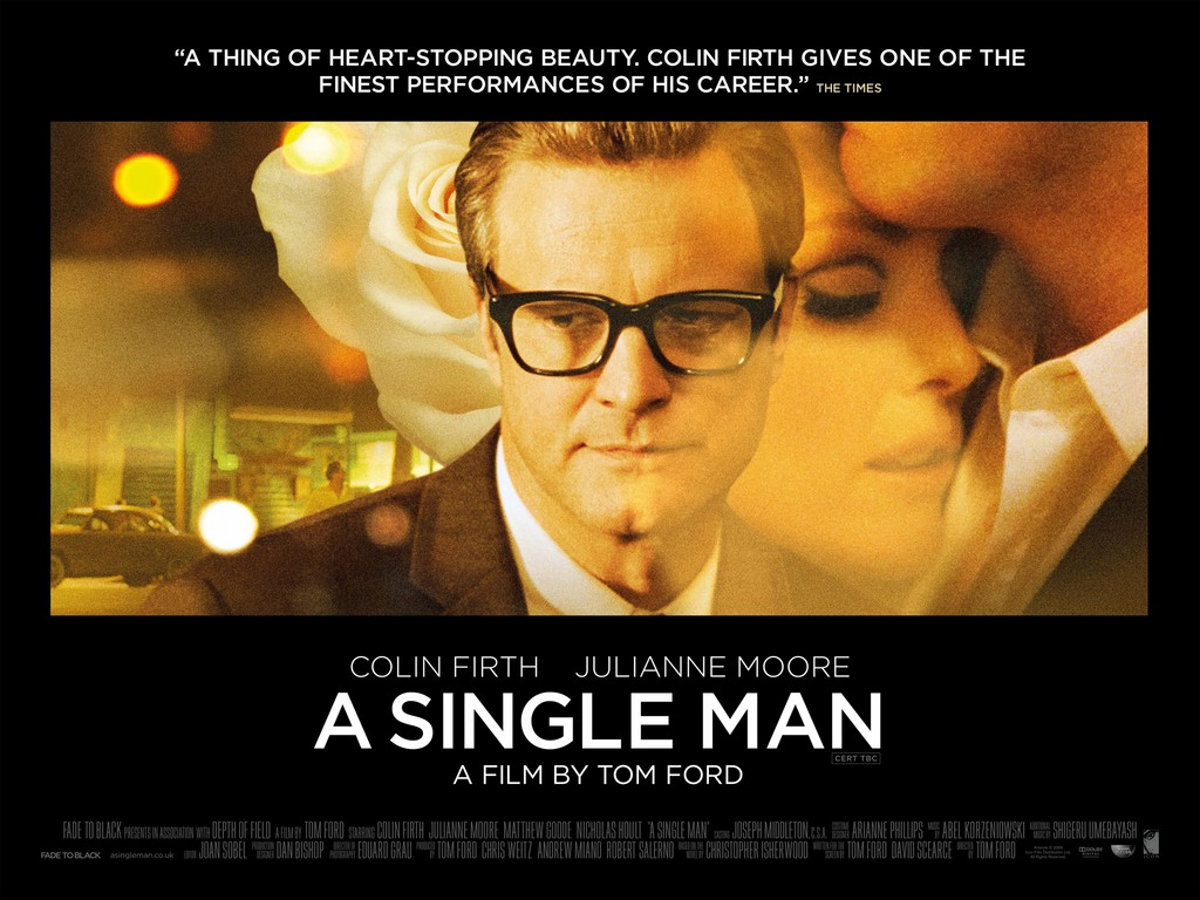 A grieving college professor, Colin Firth (Easy Virtue, Love Actually), experiences one last day after the death of his lover Henry (Matthew Goode; Watchmen). Firth is the ex-pat teacher in comfortable 1960’s LA; the Cuban missile crisis on the radio, a revolver in his briefcase. Life is poignant, beautiful and pointless.

From his last lecture, last dinner with a friend and a meeting with one of his brightest and probably gay students (fellow Brit Nicholas Hoult) is interspersed with flashbacks of his sixteen-year relationship with Henry.

Fashion designer Tom Ford’s debut film is languorous, gorgeous, reflective piece on love and loss. It’s a pitch-perfect period drama, immaculately dressed, of course. It is also a very gay movie (a Christopher Isherwood adaptation), so don’t go there if it’s not your thing. Otherwise, all the issues of homosexuality in society, attitudes, family and social norms still apply in some measure today. We have come a long way and yet we’re not so far from 60’s attitudes as we’d like to think.

Every frame looks like a double-page spread from Vogue or an up-market design magazine. In stark contrast to impending nuclear holocaust, the 60’s is depicted as a bright, shiny, designers paradise. Even a smog-bound LA becomes an impressionist painting in the red-pink smogged sunset. It’s a flamboyant, hyper-real, imagined version of the sixties that exists in the moment.

The movie has a fantastically evocative soundtrack, a mixture of orchestral score and contemporary pop.

Firth is brilliant in his full range as the Englishman abroad, the accademic, the alien, the alienated and the lost. Its a delicate performance of sadness and pathos, and its also a performance of light and shade. There’s a wonderful comic routine as he tries and fails to arrange his suicide.

Julianne Moore is ex-lover and neighbour Charlotte (complete with British accent). Their one big dialog scene, an awkward, intimate, drunken dinner is glorious, a little Noel Coward vignette of it’s own.

It will be interesting to see what Tom Ford does next. Somehow I can’t imagine him making a Trainspotting or Vera Drake. Will he even make another movie, or was this a one-time deal? RC

Robin Catling gained degrees in both arts and technology which led to a diverse portfolio of employment. A freelance systems analyst, project manager and business change manager for the likes of American Express, British Airways and IBM, he moved on to web design, journalism and technical authoring. He has also worked in film and television, both behind and in front of the camera, including productions by Steven Spielberg, Martin Scorcese, Ron Howard and Ridley Scott. A qualified three-weapon coach, he runs West Devon Swords teaching sports fencing to all age groups, and in recent years qualified with the British Federation of Historical Swordplay to teach medieval and renaissance combat in the Historical Western Martial Arts.
View all posts by Robin Catling »
« How-to: Habemus Papam! Electing a Pope [Guest Post]
How-to: Ten tips for a Successful Speech »