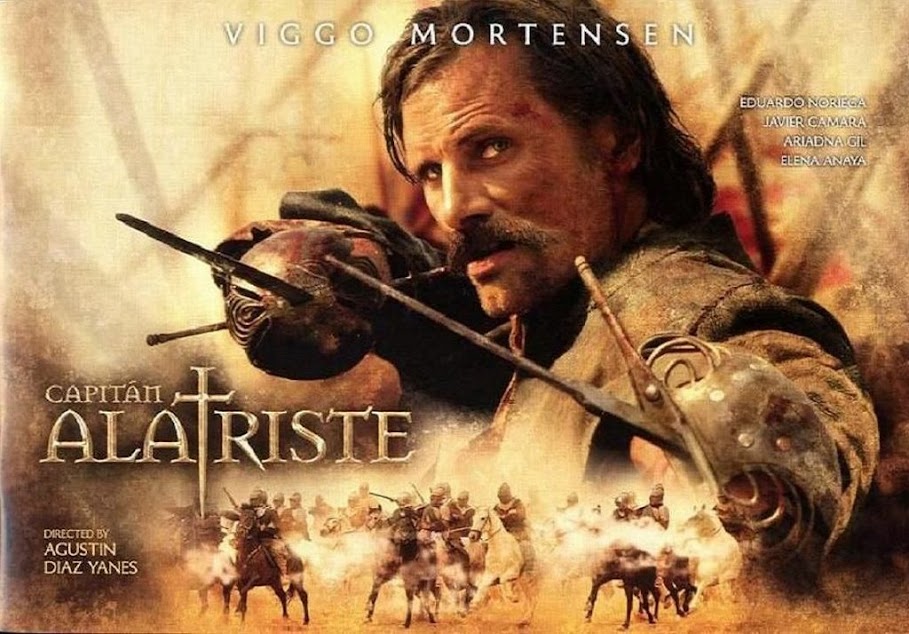 There’s much to enjoy in Viggo Mortenssen’s (Lord of the Rings, Hildago) most taciturn performance as rogue soldier-turned-mercenary ‘Captain’ Alatriste, dragging his world-weary soul through the Spanish Imperial Wars of the 17th century: just don’t expect a lavish swashbuckling adventure.

At over at $30 million, Alatriste was the most expensive Spanish feature film ever, drenched in historical accuracy, rendered on screen in a series of painterly tableaux, dripping with Catholic and state intrigue, but never quite setting the screen alight.

From Flanders, to Breda, to Rocroi, Alatriste trades his sword and his honour through the wars of a decaying Empire for a weak, ginger Hapsburg King and treads indelicately between the Inquisition and the nobility, all the while failing to protect friends and his adopted son from their own follies.

This wholly sub-titled Spanish historical drama is based on the five-volume historical novel series by Arturo Perez-Reverte, but the script is baggy, episodic and feels even longer than it’s two and a half hour running time. The books are somewhere between Zorro, The Three Musketeers and Sharpe, yet Perez-Reverte’s allegedly quick, popular entertainment prose has been turned into this ponderous processional. Scenes are langorous and laden with meaningful pauses which drag down the visceral battles and duels which break out infrequently.

Mumbling as always, but this time in impeccable Spanish (long resident as a youth in South America), Renaissance man Mortenssen is the main draw of this stilted and claustrophobic drama; his long, pallid features drawn with the fatalism of an in-virtuous man who knows he’s heading for an inglorious end, either on a foreign battlefield or in a dark alley.

The love of his life is the beautiful María de Castro (Ariadna Gil), naturally the most famous stage actress in Spain. Over the course of twenty-odd years, Alatriste works for and makes enemies of the Inquisition, various Grandees and Spain’s own Richlieu-figure, Count-Duke Olivares.

And so the vagabond Alatriste drifts across a decaying empire, between the rich aristocracy and the downtrodden poor; from rundown taverns to exquisite palaces; ill-judged military expeditions to ill-tempered back-street duels.

As a European art movie, it is splendid and there are fine performances from a cast of care-worn characters, no heroes, no villains, just survivors. Certainly there’s more substance here than in Dumas and Richard Lester’s touch-stone The Three Musketeers (1974), but consider this: I watched half, stopped and didn’t watch the other half for two months. Or was it three? It didn’t exactly enthrall me, and as you’ll see from the movie review here, I’ll sit through all sorts just from passing interest.

Perhaps it’s Mortenssen, whose sheer worthiness in every role reduces his productions to stultifying dullness? Alatriste is wearisome whereas the easily-mocked The Borgias and even the Sharpe TV series power along through just this kind of material. Perhaps that’s the solution – treat is as a mini-series and watch forty-minute chunks? You may find it to be a fine piece of TV. RC

Robin Catling gained degrees in both arts and technology which led to a diverse portfolio of employment. A freelance systems analyst, project manager and business change manager for the likes of American Express, British Airways and IBM, he moved on to web design, journalism and technical authoring. He has also worked in film and television, both behind and in front of the camera, including productions by Steven Spielberg, Martin Scorcese, Ron Howard and Ridley Scott. A qualified three-weapon coach, he runs West Devon Swords teaching sports fencing to all age groups, and in recent years qualified with the British Federation of Historical Swordplay to teach medieval and renaissance combat in the Historical Western Martial Arts.
View all posts by Robin Catling »
« News: Long Wave Goodbye Radio 4 [Guest Post]
Opinion: Why Ubuntu Phone Will Fail [Guest Post] »