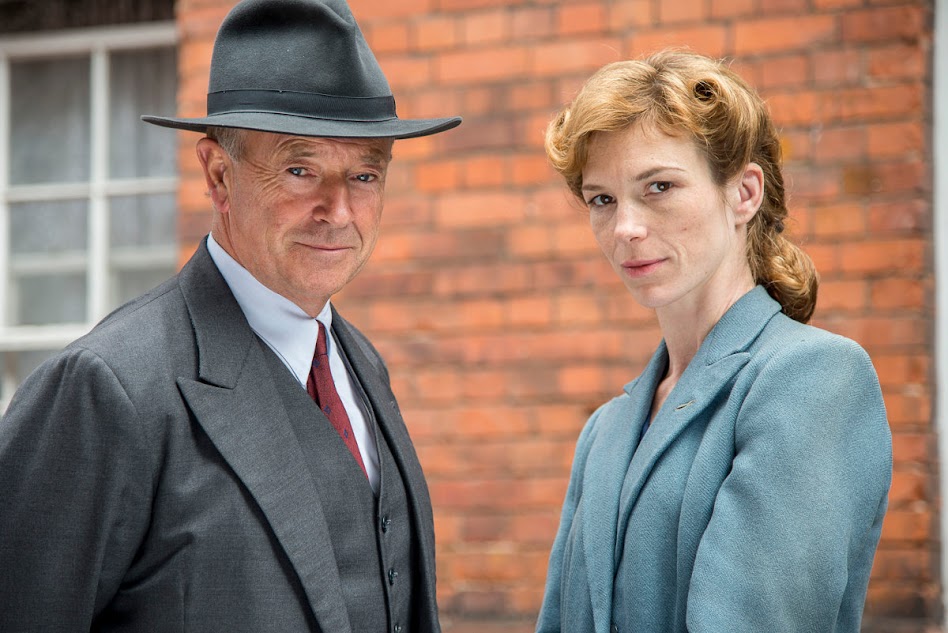 The cancelled detective is back with us thanks to the outrage of it’s loyal audience, both in the UK and around the world.

Spies in trench-coats and fedoras exchange code words on street corners in an atmosphere of Soviet-era paranoia, as one very British ex-policeman of the old school unravels the machinations of his new masters at MI5.

Sunday night TV in Britain moves into the atomic age and all the rules have changed. In Britain, bread is rationed for the first time after a dismal, cold winter, the British people are disillusioned, feeling far from victorious, while military demobilisation drags on through 1946.

Meanwhile there is a realisation that the new enemy after Hitler is Joseph Stalin’s Soviet Russia and nuclear extinction is a real possibility.

Writer Anthony Horowitz (Stormbreaker, Poirot, Midsomer Murders), Michael Kitchen and Honeysuckle Weeks have now worked together for 12 years, more than twice the length of WWII and wondered, like us, had they outstayed their welcome after eight seasons of the show?

Always gritty and thick with atmosphere, Foyle steps into the Cold War at that “all change” moment, an opportunity to reinvent the show for what may be it’s last outing.

Here, Foyle finds himself in a world of espionage where nobody can be trusted and where the truth is wilfully buried. MI5 itself is particularly thick with plot and counter plot, with regular semi-villain
Hilda Pierce (Ellie Haddington as a proto-M, Foyle’s Judi Dench or Stella Rimmongton) pressing him into the intelligence service.

Weeks returns as Sam Stewart, now Wainwight, a prospective Labour MP’s wife, finally developing a life of her own, whilst also providing the catalyst for Foyle’s involvement in a murky world of spies in the manner of early John Le Carré – Tinker Tailor in particular.

Dublin is the slightly off-kilter substitute for London, having a wealth of undamaged period streets and grand buildings to film without resort to expensive and unconvincing CGI.

Despite British crime drama coming under the influence of Wallander, The Killing and other gritty series, the British audience of  older, upmarket viewers still loves old-style shows with self-contained episodes and period detail; vintage cars, trench-coats, hats and genteel manners.

Foyles War steps into the rather cosy Sunday night period slot recently filled by Mr Selfridge, Marple and Downton Abbey (up against the BBC’s Call the Midwife). It treads a fine line between cliché and pastiche and unlike any of the shows just mentioned, never strays the wrong side of it.

Kitchen and Weeks have built a remarkable partnership set to continue through the remainder of the series, which promises plots drawn from genuine incidents of the period. You may not be a fan of Horowitz, ITV drama or Sunday night TV in general, but this could well change your mind, having quality woven right through it. RC

Robin Catling gained degrees in both arts and technology which led to a diverse portfolio of employment. A freelance systems analyst, project manager and business change manager for the likes of American Express, British Airways and IBM, he moved on to web design, journalism and technical authoring. He has also worked in film and television, both behind and in front of the camera, including productions by Steven Spielberg, Martin Scorcese, Ron Howard and Ridley Scott. A qualified three-weapon coach, he runs West Devon Swords teaching sports fencing to all age groups, and in recent years qualified with the British Federation of Historical Swordplay to teach medieval and renaissance combat in the Historical Western Martial Arts.
View all posts by Robin Catling »
« Review: Dido – Girl Who Got Away
The Golden Record – Voyager’s Message in a Bottle »