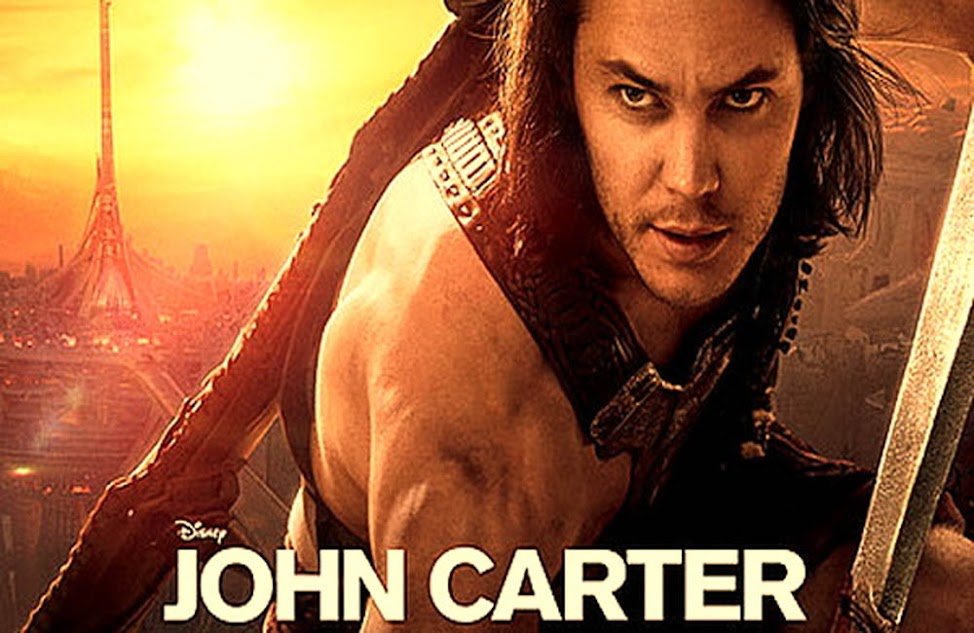 They should have got Brian Blessed. “Carter’s alive!?!?!?”

It took forever to edit, cost more than the national debt of Cyprus, and what we got was an Edwardian sci-fi Western adventure romance, Chariots of the Gods care of Tarzan creator Edgar Rice Burroughs, given a thorough dulling-down by Andrew Stanton and Disney.

Disney Corp. proved it could make a giant homage to train-wreck sci-fi The Phantom Menace, which presumably sealed the deal for George Lucas to sell it Star Wars.

Just to be contrary, I’m going to give John Carter (of Mars) the benefit of the doubt. After all, I don’t suppose the navy intended to bash our submarine on the sandbank, or the Italian captain intended to hit the rocks with his cruise ship. With hindsight you know none of these things should happen.

So how did movie captain Andrew Stanton (Wall-E, Finding Nemo) get it so wrong? It’s an epic scope of warring empires, desert tribes, big landscapes, huge flying sequences, motion-captured CGI aliens (for some reason everything has six limbs on Mars), cute-ugly monsters, a lot of jumping and hacking. Ideal for 3-D, merchandising and computer game tie-ins. Oh.

Thanks to the corporate tick-box production, it tanked worse than the abysmal Cowboys and Aliens.

I’d say it all starts in the straight-jacket of the source material, the now-camp, high-concept sci-fi nonsense of E.R.B’s early pulp adventures. The daft, unpronounceable and laughable names keep tripping all the way to the end credits; by the time a bus-load of writers got it to the screen, it’s all a bit Flash Gordon, with a bit of 300 and way too much Star Wars.

Saddled with a John Wayne hero, the unfortunately named Taylor Kitsch (fire your agent, KT), with the right muscles but the emotional range of a teabag, none of the back-story of confederate cavalryman John Carter really mattered.

Well, did you ever, he decides to rescue Dejah Thoris (smugly seen-it-all-before Lyn Collins) using his one superpower, jumping really high in Mars’ low gravity. What do you know, she’s a kick-ass chick, science professor and looks good in cod-Greco-Roman low-cut fashion.

Which lands him in the middle of the war between the red-skinned Heliumites of King Tardos Mors (Ciaran Hinds, The Woman in Black) and the Zodangas led by homicidal Sab Than (Dominic West, The Awakening, From Time to Time), the Prince of Zodanga. A war stirred up by the Therns, a bored god-like race led by Matai Shang (the ubiquitous Mark Strong, The Eagle, Kick Ass, underplaying Ming the Merciless).

I said the material was a laughable Laudanum trip of silly names, not helped by Stanton’s screenwriting which drops huge clunkers a couple of divisions below George Lucas. And very few jokes. Only West and cameo player James Purefoy (Ironclad) play it for laughs.

Taking early sci-fi from 1917 means most of it has been stolen by TV and movies over the decades, including Daniel Craig’s re-run in Cowboys & Aliens: waking up in a desert with an amulet, discovering special powers, and suffering flashbacks about a dead woman he couldn’t save.

Kept respectable by the many Brits in the cast and half decent voice acting from Willem Dafoe, Samantha Morton and Thomas Hayden Church, it’s not a patch on Avatar – and I don’t even like Avatar that much (recycle joke: Dances with Smurfs, or in JC’s case, Dances with Giant Horned Toads). If you twig that the Tharks are the Native Americans, and the Zodangans and the Heliumites are the civil war… you still don’t give a monkey’s.

So either choke on your popcorn or sit back and enjoy the set-pieces; gladiatorial combat with albino space wombats (copyright Chris Tookey, Daily Mail), Carter’s one-man show-down with the Thark horde, and the armed resistance, a la Flash Gordon at the end.

JC’s one good idea is not to let a good wedding go to waste, just propose to the Princess while she’s still showing off the Barsooms and the former groom is dissolving into blue goop.

They should have got Brian Blessed. “Carter’s alive!?!?!?” RC

Robin Catling gained degrees in both arts and technology which led to a diverse portfolio of employment. A freelance systems analyst, project manager and business change manager for the likes of American Express, British Airways and IBM, he moved on to web design, journalism and technical authoring. He has also worked in film and television, both behind and in front of the camera, including productions by Steven Spielberg, Martin Scorcese, Ron Howard and Ridley Scott. A qualified three-weapon coach, he runs West Devon Swords teaching sports fencing to all age groups, and in recent years qualified with the British Federation of Historical Swordplay to teach medieval and renaissance combat in the Historical Western Martial Arts.
View all posts by Robin Catling »
« What’s the opposite of a one-hit wonder? [Guest Post]
Humour: Windows Update Temperature Fail »