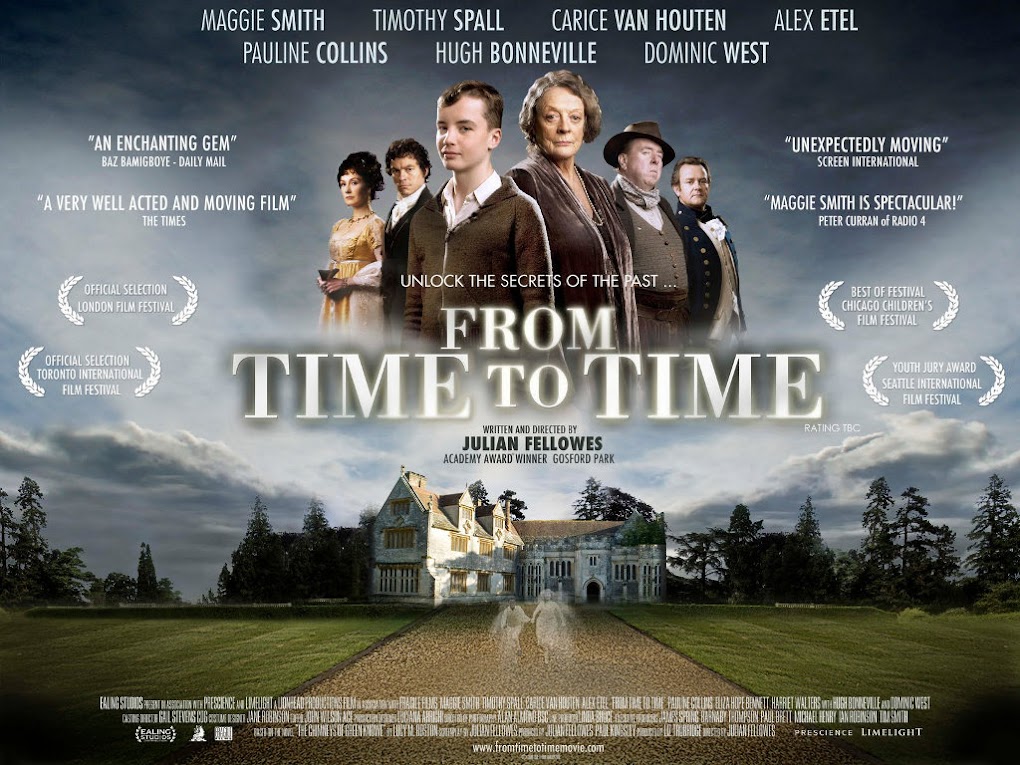 And so we’re thrown back into family history in the early 1800’s, an opportunity for Austen-tatious breeches and crinolines, through the ghosts of blind Susan (the aptly cast Eliza Bennett) and her freed slave companion Jacob (Kwayedza Kureya).

In the Wartime ‘present,’ the marvellous Ms. Smith is supported by trusted servants Mrs. Tweedle (Pauline Colliins – Shirley Valentine) and Boggis (Timothy Spall – Harry Potter), to make the best of an anxious and war-ravaged holiday season.

But before long, Tolly miraculously achieves some kind of astral projection to time-travel back to the period and becomes involved in the intrigues of the household: stalwart Capt. Oldknowe (Hugh Bonneville – Downton Abbey), social-climbing wicked step-mother Maria (Carice van Houten – Black Death, Game of Thrones) and spoilt son Sefton (Douglas Booth – Great Expectations). All the while, villainous butler Caxton (Dominic West – The Awakening, The Wire) plots and schemes.

Actor-turned-writer/producer/director Julian Fellowes (Oscar-winner for 2001’s Gosford Park), turns in another immaculate English country house drama, but all in all, From Time to Time is a confused muddle of tropes, themes and plot lines.

Even I have to say it’s a pudding-basin of ingredients too far.

The central theme continually disappears in the trifle layers; looking at the dusty portraits, Tolly asks who they are: “They are your family,” replies Linnett, to which he answers “But they’re all dead, aren’t they? I thought your family had to be alive.”

As he explores and picks over the accumulated family legends, to actually Meet the Ancestors, Tolly comes to understand the connection between the past and the present, and literally build a relationship between the living and the dead.

But the serious flaw is at the end. Although the characters and performances are admirable across the board – all the child actors going to to star roles – From Time to Time jarrs throughout and plummets horribly at the end.

Fellowes takes us to a very dark place in contemplating death and mortality; the emotionally complex finale is a stark tear-jerker.

The ghostly goings-on and terrifying house-fire rescue may prove too much for younger viewers, while the utter lack of logical narrative will frustrate the older ones; but it’s that ending that will leave all of them dejected, whatever the qualities of the preceding hour and a half. RC

Robin Catling gained degrees in both arts and technology which led to a diverse portfolio of employment. A freelance systems analyst, project manager and business change manager for the likes of American Express, British Airways and IBM, he moved on to web design, journalism and technical authoring. He has also worked in film and television, both behind and in front of the camera, including productions by Steven Spielberg, Martin Scorcese, Ron Howard and Ridley Scott. A qualified three-weapon coach, he runs West Devon Swords teaching sports fencing to all age groups, and in recent years qualified with the British Federation of Historical Swordplay to teach medieval and renaissance combat in the Historical Western Martial Arts.
View all posts by Robin Catling »
« How-to: Marketing the Brand “New You”
News: Full Circle Magazine Issue 71 Has Arrived »