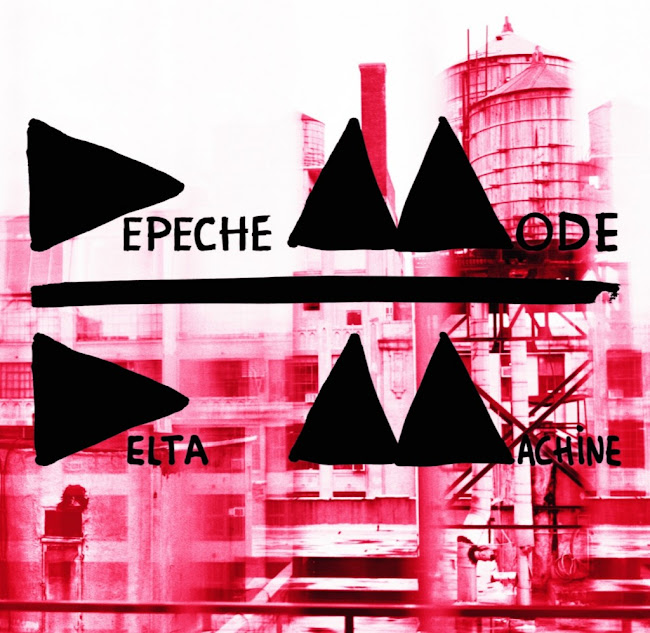 The band that bought us Personal Jesus and Enjoy the Silence back with a new album to celebrate thirty years in music.

Recently asked on a chat show what their songs are about, Gore and Gahan replied “death, pain and suffering.” It’s been a winning formula and Depeche Mode see no reason to change now. Settle back for an incongruous mix of guilt, regret and religious imagery in the monastic cloister of the penitent libertine that is Depeche Mode’s dark soul. With the occasional glimpse of redemptive sunlight.

The current single, Heaven, is a standard Depeche lament, an electro-blues number that sees Depeche Mode jumping into the void. Like they do. It’s one of the more mature and unique tracks in their repertoire.

Otherwise Delta Machine is filled with classic album tracks that could have come from any of their albums – from Violator to Playing the Angel to the most recent Sounds of the Universe. Apologies if my references to other Depeche Mode songs leaves you cold, but you’re dealing with a fan from all the way back to eighties classic A Broken Frame.

Depending on your point of view, there’s either a lot of reworking of previous tracks, or a comfortable groove to slip right into if you’re a fan. If there is a problem with Delta Machine, this is it: the album feels like a thirty-year remix project, remoulding Depeche Mode’s back catalogue with the benefit of hindsight since Violator.

In Delta Machine, you can plot the continuous line from there to the electro Soft Touch/Raw Nerve through Soothe My Soul – up-tempo tracks filled with twangy synths and drum machines, lifting freely from Songs of Faith and Devotion (I Feel You) and Ultra (It’s No Good), their renaissance in the 2000’s.

So Broken is a re-run of Little Sixteen laid over Behind the Wheel, Goodbye is a more sombre version of I Feel You with a bit of Personal Jesus. Soothe My Soul stays in I Feel You territory. For Should Be Higher, Dave Gahan stretches his vocal range, renovating Little Sixteen in the style of Come Back. Angel is a bit more Southern blues thrown in the cement mixer with I Feel You. Slow does the Delta blues thing with the guitar, top-and-tailing DM’s down-tempo, contemplative lovesong. My Little Universe struck me as Leave in Silence updated via World in My Eyes, but I’m sure as I listen through the back catalogue I will be reminded of others.

And for me, Depeche Mode fan since Speak and Spell, that’s absolutely fine.

About the only low point is The Child Inside, the usual mid-album break for Martin Gore’s mournful droning of his own self-parody lyrics, accompanied by post-industrial metallic clanging: “There is darkness and death in your eyes/ What have you got buried inside/ The shallow grave in your soul/ There ghosts there have taken control.” There follows extended imagery of body parts, tears and drowning your inner child. Oh, please. Too much, Martin, even for me.

Delta Machine is no bad place to start an acquaintance with Depeche Mode, while the fans will find it instantly familiar; put on the eye-liner and get angsty with the Basildon Boys all over again. RC

Related: Review: How to Destroy Angels – An Omen EP

Robin Catling gained degrees in both arts and technology which led to a diverse portfolio of employment. A freelance systems analyst, project manager and business change manager for the likes of American Express, British Airways and IBM, he moved on to web design, journalism and technical authoring. He has also worked in film and television, both behind and in front of the camera, including productions by Steven Spielberg, Martin Scorcese, Ron Howard and Ridley Scott. A qualified three-weapon coach, he runs West Devon Swords teaching sports fencing to all age groups, and in recent years qualified with the British Federation of Historical Swordplay to teach medieval and renaissance combat in the Historical Western Martial Arts.
View all posts by Robin Catling »
« News: Full Circle Magazine Issue 71 Has Arrived
What is Ubuntu Touch? [Guest Post] »