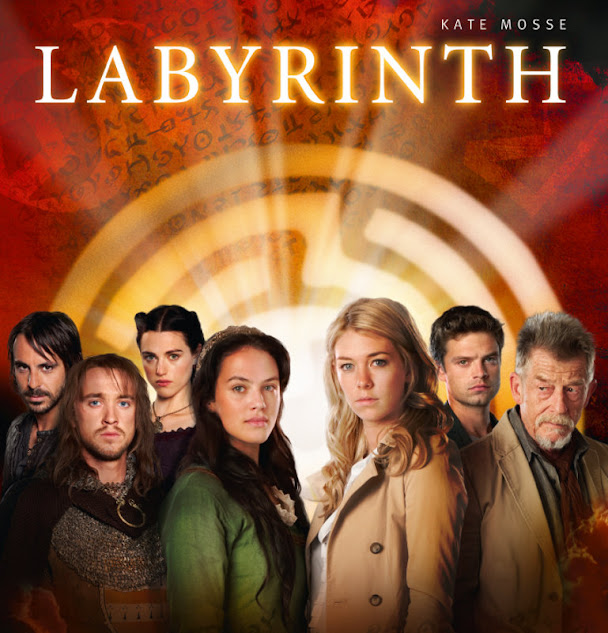 Supervising the adaptation of her own 2005 novel, Kate Mosse delivers an historical-mystery-conspiracy-supernatural-‘thriller’ based on some cod-historical version of the Holy Grail myth which mystifies but fails to thrill.

Channel 4 TV trumpeted Labyrinth as a flagship drama. With medieval and modern plot lines mashed together with the subtlety of the earthquake in episode one, Labyrinth suffers cardboard characters, unconvincing dialogue and some hideous Hollywood clichés.

And despite this being The Da Vinci Code with a Baccalaureate, I still have no idea what the Grail is or how it works.

All in all, I’d rather have watched the kids movie Labyrinth with David Bowie.

Kate Mosse sells bad books by the truckload; I couldn’t even get started on Labyrinth it was that bad. But having poured all her research into 700 pages, Mosse has to try to compress it into three hours of expensive ($20m) TV.

Like the novel, Labyrinth alternates ‘chapters’ between 2005 and 1209, between Alice Tanner’s discovery of a hidden cave and the conspiracy surrounding it, and the massacre of Cathars by marauding Northern Crusaders under licence to execute heretics by the Pope.

In 2005, Vanessa Kirby (Great Expectations) gets to look doe-eyed, blonde and pretty as Alice, trailing around getting spoon-fed clues by token American Will (Sebastian Stan) and gritty, if elderly John Hurt.

In 1209, Alais (Jessica Brown Findlay, Downton Abbey) does better becoming a guardian, like her father, of three books that contain the secrets of the Holy Grail. The timing is inconvenient with the Crusaders besieging their fortress home of Carcassonne, and a rivalry with evil half-sister Oriane (Katie McGrath replaying her one-dimensional panto wicked queen from BBC’s Merlin).

All the lavish costumes, sets and hundreds of extras can’t compensate for the lack of spark in the whole thing: it’s a Euro-pudding that ticks all the right boxes for ingredients but fails to rise in the oven. Which is disappointing since it’s a collaboration of Scott Free (Tony and Ridley Scott) and Tandem (Pillars of the Earth), so these folks should know what they’re doing.

Fortunately most of the nasty people get their cum-uppance of nasty ends for all the nasty ends they’ve inflicted on the nice people. Which is about all you need to know as the climax makes even less sense than The Da Vinci Code.

Hurt spouts an abbreviated load of mystical mumbo-jumbo about love and history and telling stories, Kirby is (surprise, surprise) Alais’ descendant, and the ‘navigator’ – slightly comical given she’s had no clue where she’s going for three hours. There’s some ‘oooh, awesome’ bright light, some waffle about immortality and a lot of people get shot or stabbed.

And after three overlong hours, I still have no idea what the Grail is or how it works. That’s what you call a Medieval Mystery. RC

Robin Catling gained degrees in both arts and technology which led to a diverse portfolio of employment. A freelance systems analyst, project manager and business change manager for the likes of American Express, British Airways and IBM, he moved on to web design, journalism and technical authoring. He has also worked in film and television, both behind and in front of the camera, including productions by Steven Spielberg, Martin Scorcese, Ron Howard and Ridley Scott. A qualified three-weapon coach, he runs West Devon Swords teaching sports fencing to all age groups, and in recent years qualified with the British Federation of Historical Swordplay to teach medieval and renaissance combat in the Historical Western Martial Arts.
View all posts by Robin Catling »
« Review: Outlook.com Web Mail 2013
How-to: Avoid Common Security Mistakes On-line Part2 »