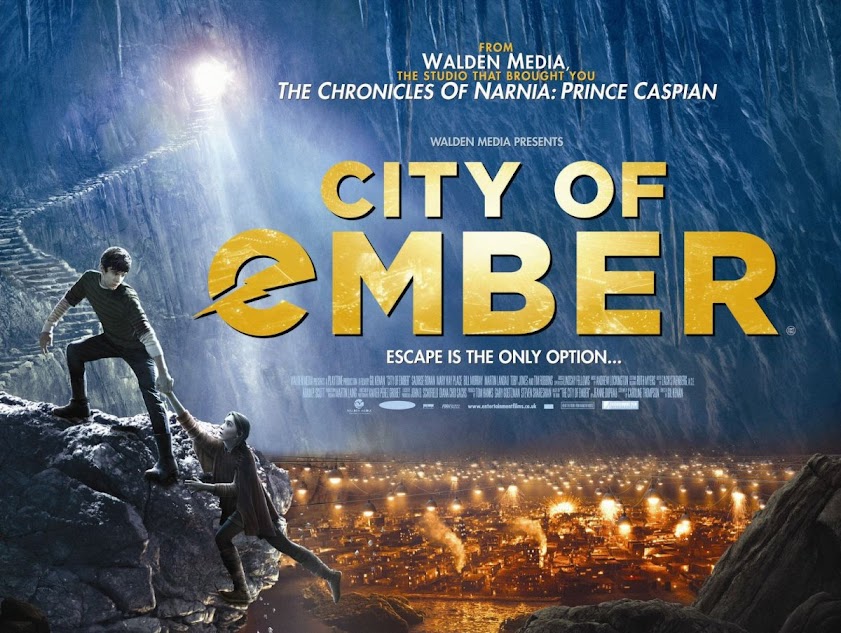 Based on Jeanne DuPrau’s best-selling novel, the City of Ember is mankind’s last refuge from an unspecified environmental disaster: a bunker built to last two hundred years when the survivors will return to the surface. Problem is, no body told them and the secret instructions have been lost. While food is running out and the Generator is breaking down.

Starting on Assignment Day, Lina Mayfleet (Saoirse Ronan, Atonement, Hanna) and Doon Harrow (Harry Treadaway), begin their adult lives as messenger and pipe-worker, as the city’s generator continues to blackout and food runs short. It is a city in fear of darkness within and unknown terrors without. It is also a regressive society, with all sorts of knowledge being lost.

If you like your fantasy to be retro-steam-punk like Terry Gilliam’s Brazil or Jeunet and Caro’s The City Of Lost Children, stick with the teenagers and the illogical plot, City of Ember is a fast, quirky thrill-ride.

Of course, it is Lina who rediscovers the sheet of instructions left by the Builders explaining how to leave the city; but it is incomplete. Lina and Doon have to find the missing pieces, solve the puzzles, evade an horrific giant mole-slug creature, follow the instructions and operate the old machinery in order to make a terrifying escape – to what?

They both have family issues, Doon with his inventor father (Tim Robbins, Shawshank Redemption), Lina with her elderly, demented gran (Liz Smith, The Royle Family).

Director Gil Kenan (Monster House) renders the city of Ember with love and care, the characters are broadly drawn and the various chase and puzzle-solving sequences are only briefly interrupted by plot. The dialogue is pitched deliberately at kids and younger teens.

The movie ends in an theme-park ride down the mother of all log flumes – very Temple of Doom or Deathly Hallows roller coaster.

Bill Murray (Ghostbusters) phones in his performance (again) as the corrupt mayor, Tim Robbins is secretive and almost absent as Doon’s father, Liz Smith delightfully batty as Lina’s grandmother, and Toby Jones (Harry Potter) does yet another goblin side-kick as the mayor’s assistant. Acting honours go to veteran Martin Landau (Ed Wood, The Majestic) as the old mechanic, Sul.

But Ember itself is the lead character, a Dickensian dystopia of grimy streets and scruffy urchins, a decaying, urban jumble of crumbling art deco, rusting pipes, and Edison lightbulbs, a creation that is the best thing on the whole movie. RC

Robin Catling gained degrees in both arts and technology which led to a diverse portfolio of employment. A freelance systems analyst, project manager and business change manager for the likes of American Express, British Airways and IBM, he moved on to web design, journalism and technical authoring. He has also worked in film and television, both behind and in front of the camera, including productions by Steven Spielberg, Martin Scorcese, Ron Howard and Ridley Scott. A qualified three-weapon coach, he runs West Devon Swords teaching sports fencing to all age groups, and in recent years qualified with the British Federation of Historical Swordplay to teach medieval and renaissance combat in the Historical Western Martial Arts.
View all posts by Robin Catling »
« Opinion: The Death of Privacy, Part One [Guest Post]
How-to: Deal with Elephants with Agendas »